Well, I had prepared a long, detailed, thought-out post, mostly about today (October 19th), but I didn’t save it often enough. I went to copy and paste one sentence when the application froze, crashed, and deleted everything except my copied sentence that I was trying to move. So, for now, I’ll share with you the photos from our tour of the Killing Fields and S21 prison; remnants from the Khmer Rouge, or better known in the US as the Pol Pot (“political potential”) regime. I remember learning about this in Global History, but I didn’t grasp what it was back then.

To learn more about what happened, go to this link. I found it after a little bit of research: (www.cambodiatribunal.org/cambodian-history/khmer-rouge-history/). 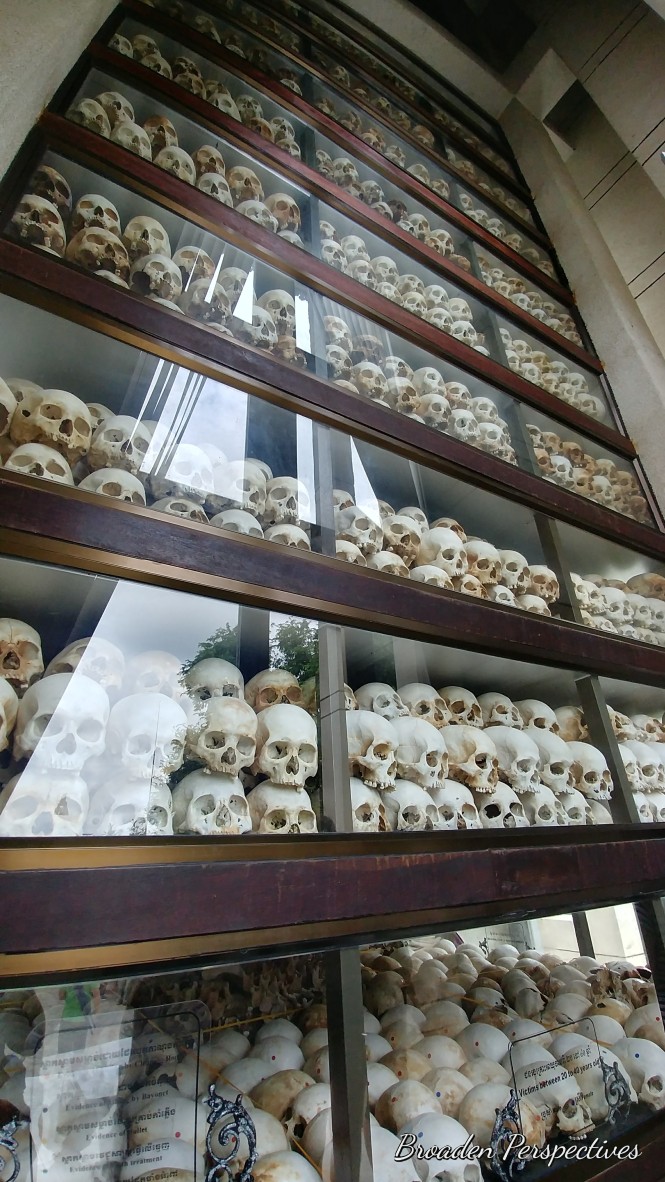 Bones and skulls of just some of those executed during the Khmer Rouge.

Clothes of some of the victims (center) and shackles, iron spikes used to kill, and wire used to tie hands.

One mass grave; victims found to be headless.  Described to potentially be Khmer Rouge soldiers who disagreed/opposed what was happening in some way and so were killed.

Mass grave of women and small children. The bracelets on the bamboo fence have been left with a prayer by visitors. 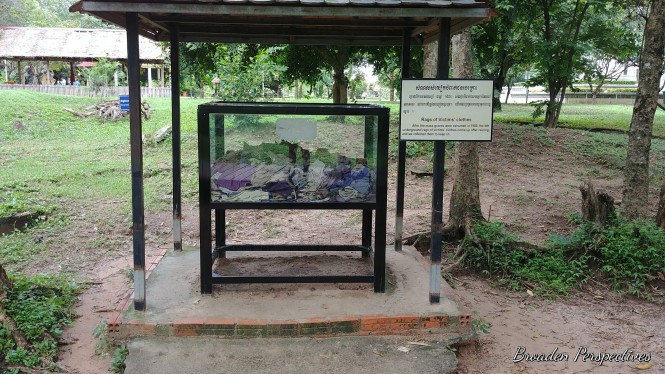 Victims clothes that have been unearthed and collected over time.

The tree adjacent to the women and childrens mass grave. 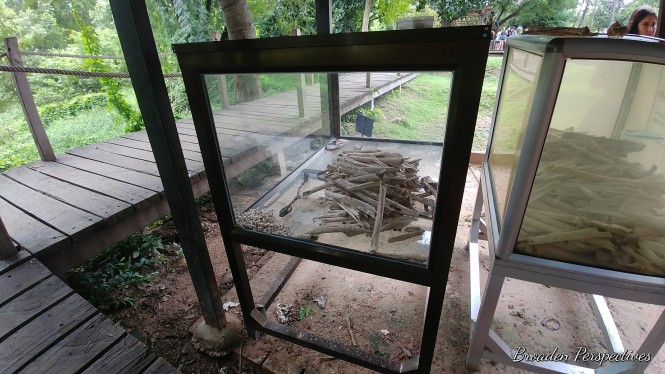 Bones that continue to be unearthed by rain and collected. 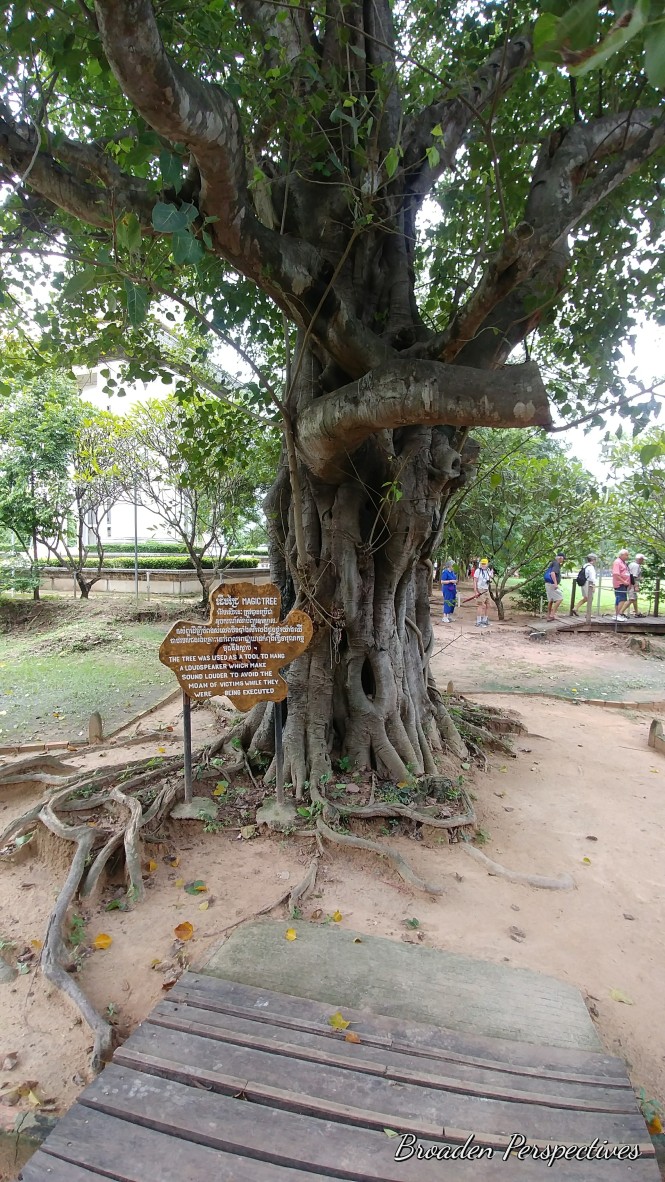 If you look closely, you can see some of the items described in the photo above.

The school that was turned into a prison by the regime, known here as the S21 prison (Tuol Sleng Genocide Museum): 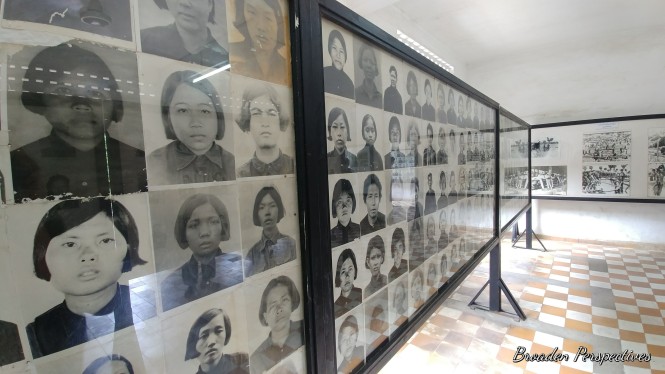 Each classroom/prison cell had rows and rows of similar pictures; most were victims, some were of child/young adult soldiers of the regime that had been brainwashed.

Upper left-hand corner (large photo) is of Pol Pot himself.  Below him is the man who ran the S21 prison (who is currently serving a life sentence in prison – only 1 of 5 people who were imprisoned for their crimes). 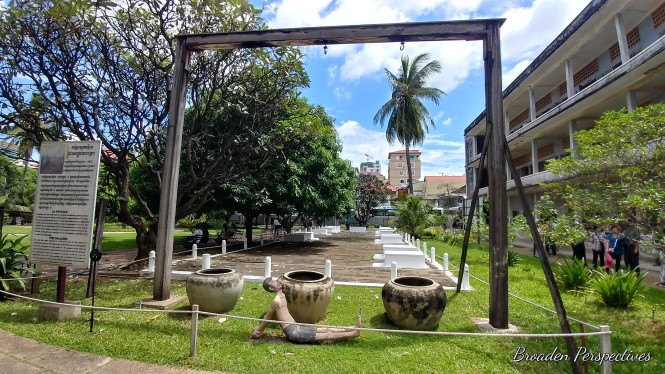 Rules for the prisoners.

The 4 children that survived the prison by hiding in a pile of clothes.  They were found when Vietnamese troops overtook the compound. 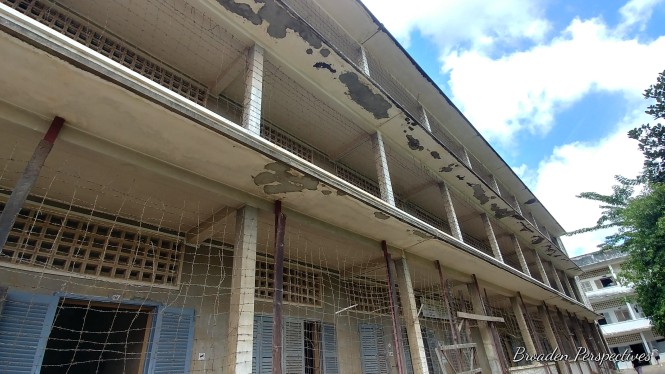 Barbed wire prevented any loose prisoners from committing suicide by jumping off. 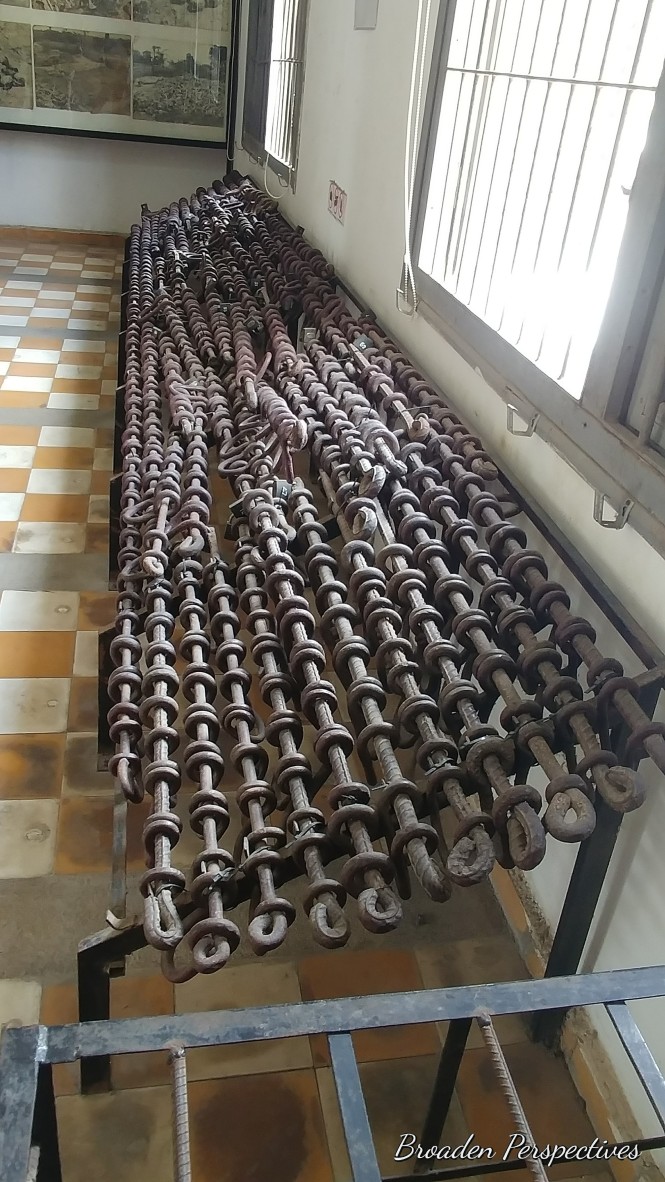 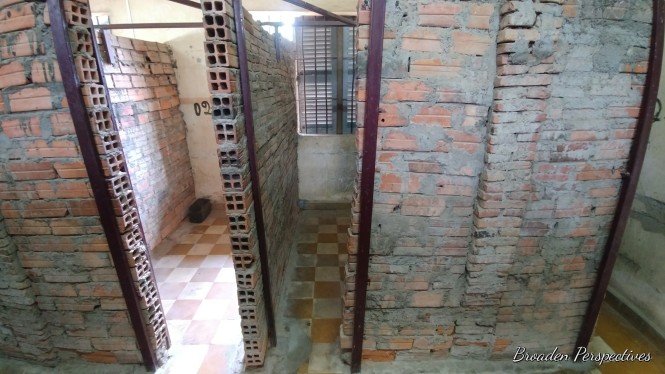 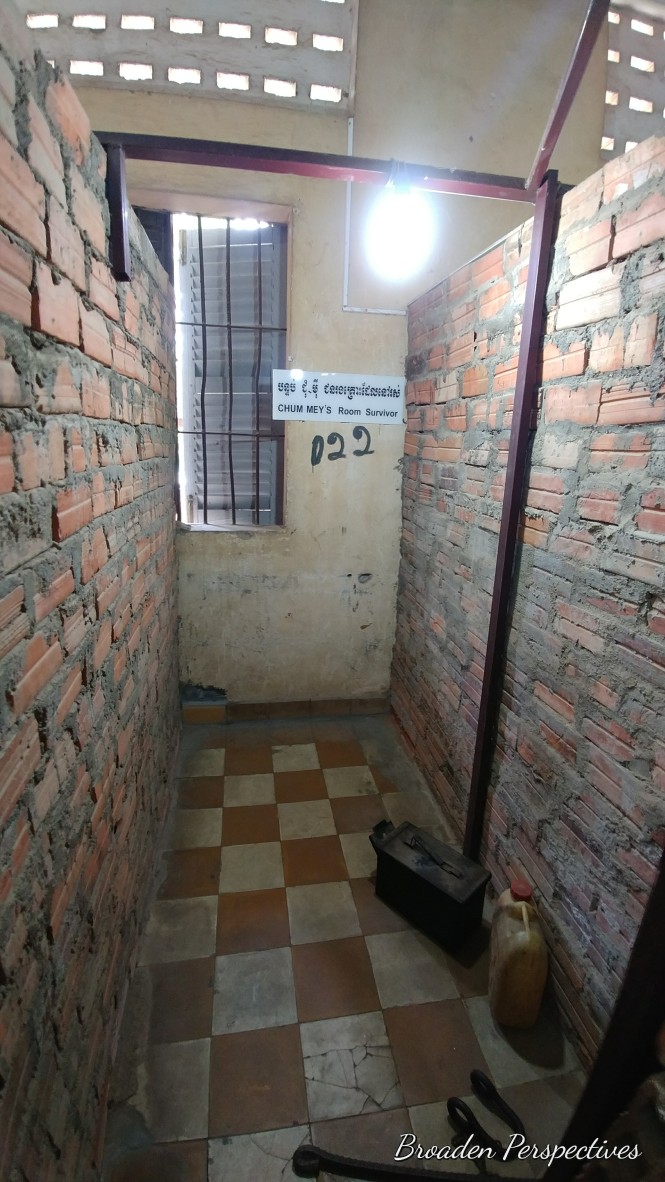 Two men survived the prison due to their skills – mechanic and artist.

Women were held (not shackled) in cells built of wood. 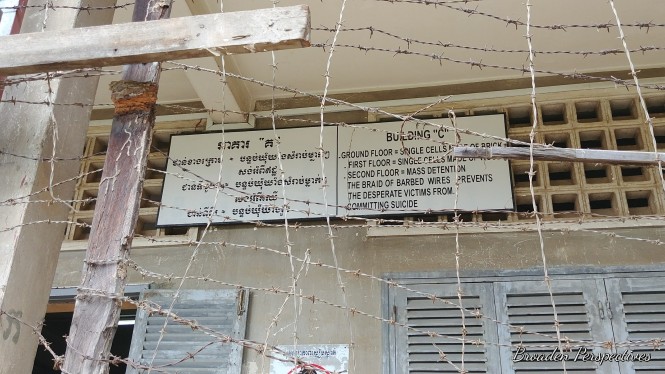 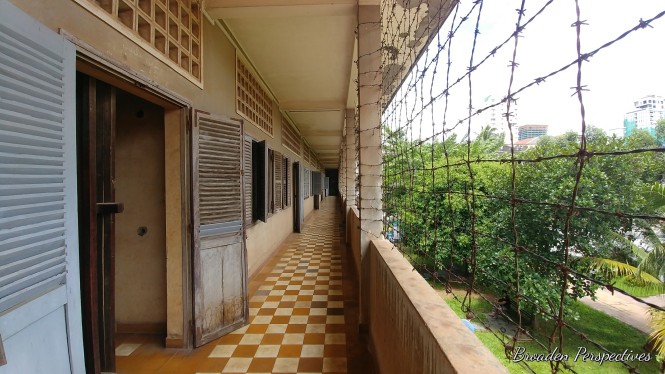 When the Vietnamese overtook the compound, the Khmer Rouge killed 14 of 20+ victims before they abandoned the compound and went back to the jungle.  Those last 14 victims were photographed and buried as seen in this photo.

This is the steel bed frame that one of the last 14 victims was found on.  The black staining underneath is said to be the blood of the victim. 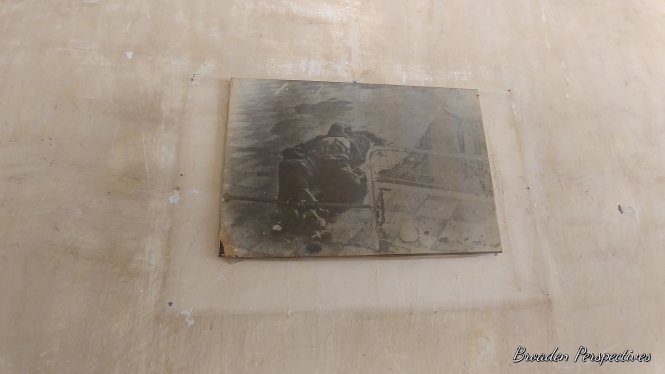 One other of the last 14 victims.

I believe this is building “A” where the higher ranking prisoners were held.

There are two living survivors of S21 prison – we met both today.  I bought one of their books.  Anyone who would like to borrow the book, please let me know.  This guy is the mechanic who survived because he was able to fix the regimes typewriter and so they kept him alive.

I’ll come back and fill in the gaps (re-write) what I had written before the application crashed. When I do, I’ll let people know so that you can come back and read it.

In the meantime, you can go to a link I found which provides a little bit of what I discussed. However, I had written more as described by our local tour guide but unfortunately that whole write-up was deleted. Here is the link: (www.cambodiatribunal.org/cambodian-history/khmer-rouge-history/).