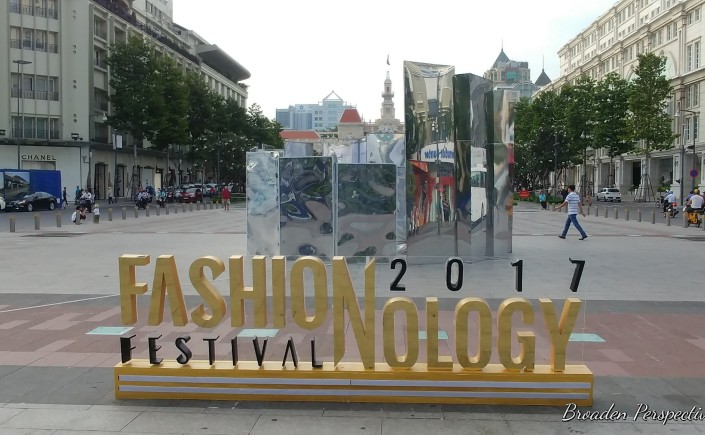 We arrived in Ho Chi Minh about mid-day, checked into our rooms, dropped our big packs, and then headed out for lunch at a restaurant called Pho2000. How did it get its name? Well, we made a pretty safe assumption that it was because the former President Bill Clinton visited this restaurant in 2000. They had the table where he sat covered with a maroon table-cloth (others weren’t covered) with a piece of paper under the table glass where he sat indicated what he and Chelsea Clinton had ordered.

After lunch we had free time to do whatever. I went back to the hotel for a shower since we didn’t at the homestay.  Ho Chi Minh is where our tour group grew by 5 people; 4 more guys (yay – LOL) and one more young lady. So now our trip is up to 8 women and 5 men. After showering, a couple of the other ladies and I headed out to explore the city a bit. We walked and walked and I became a little bit sorry that I wore my flip flops (or “thongs” LOL) and not my super comfortable sandals. Oh well, I made it work. We ended up walking to the Bitexco Financial Tower and visiting the EON51 pub/restaurant on the 52nd floor where we watched the sunset over a drink.

Drinks in Ho Chi Minh/Saigon on the 52nd or 53rd floor.

The view looking up and out of the building from one of the first floors. 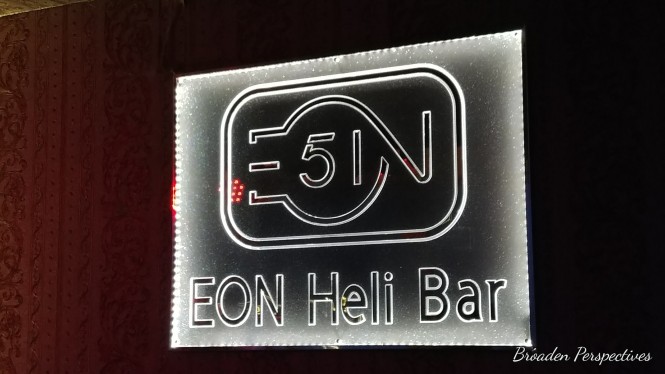 There happened to be live music – just a guy playing the guitar and singing… He was really good. I believe he said he was from Texas when I started and I thought “What is a guy from Texas doing hanging out and playing music here?!?”

Afterwards, we caught a taxi back to the hotel to be in time for dinner and to meet our new group members. We had dinner at a food court in the city. I got “pho” with vegetables; basically noodle soup with vegetables. And guess what; I used CHOPSTICKS!! For some reason, I just got it and was able to use them! I’ve been able to use them a couple of times since then and now yesterday (yes, I’m getting a little bit ahead of myself – but 10/26), I was having trouble with them again. It usually happens. I can use them efficiently for a little while and then my hands just reject them or something. Sort of frustrating.

We subsequently got ice cream which was made in a way I’ve never experienced before. They poured cream and some blended-up passion fruit onto a freezing cold stainless steel countertop. With spatulas, they mixed it together like crazy as it froze down into ice cream. Then, they smoothed it out to be about a few millimeters thick, let it sit for a few seconds, and then with their spatula they scraped it off of the frozen counter which rolled it into little ice cream rolls which you see below. Pretty interesting! It was delicious by the way. Although, I’m not a huge fan of the crunchy passion fruit seeds, the flavor was really yummy. 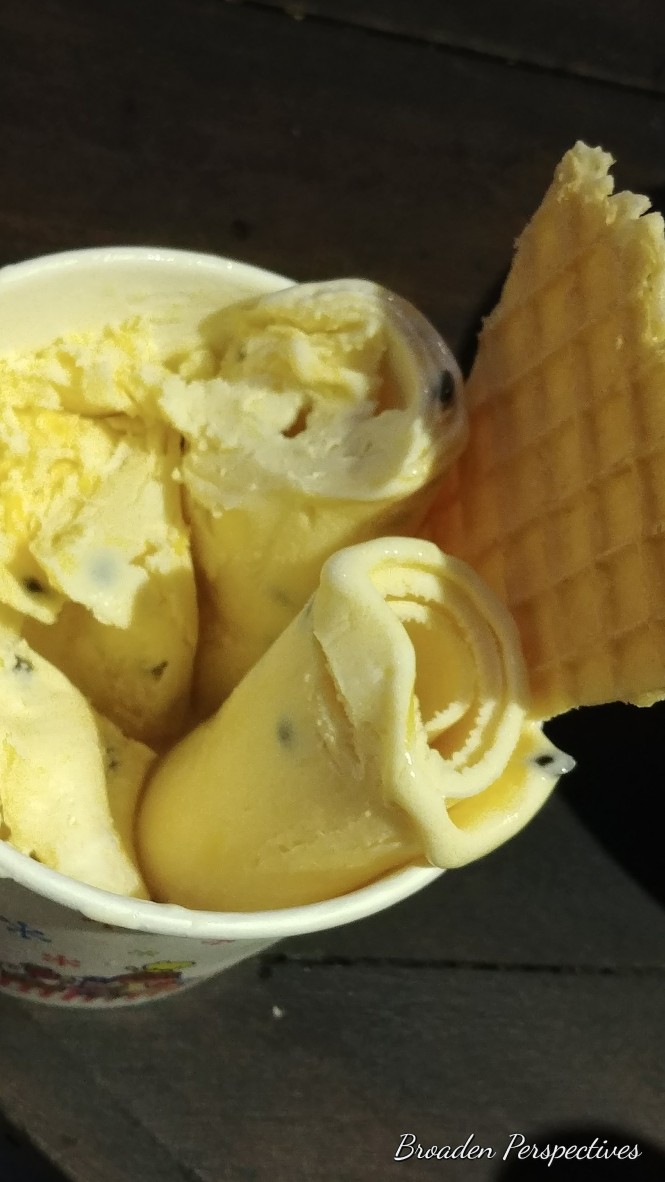 October 24th: Today we were booked for a tour of the Cu Chi Tunnels – a remnant of the Vietnam War. Our local guide for the tour was a Vietnamese war veteran who had suffered some serious injuries but was still able to work as a tour guide. Since I sat in the front of the bus, we ended up chatting for a little while on the way to the tunnels and for another little while on the way back to the hotel. So, the tunnels: I’m not sure how to describe the tunnels or the entire memorial grounds… but I actually found an old article online that describes it really well! Here is the link to the Washington Post article: http://www.washingtonpost.com/wp-dyn/content/article/2004/05/02/AR2005041501925_2.html So, now I’ll just post some pictures to describe what we saw and then will recount some (not all) of what our local guide recounted for us. 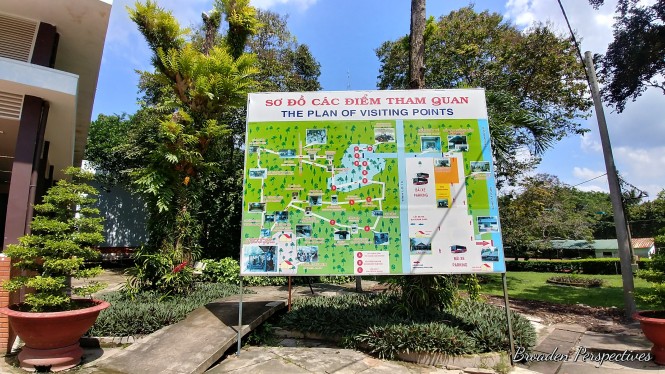 An entry sign into the Cu Chi Tunnels grounds.

A disguised trap door into the tunnels.  This was no bigger than 2 feet by 1.5 feet.  Super small.

An old US tank that had been destroyed by a bomb or landmine. You can see bullet holes in the side.

The Viet Cong used to take unexploded US bombs, carefully cut them open, and then utilize the explosive material to create landmines and other smaller explosive devices; one bomb could supply 18 smaller devices with explosive material. 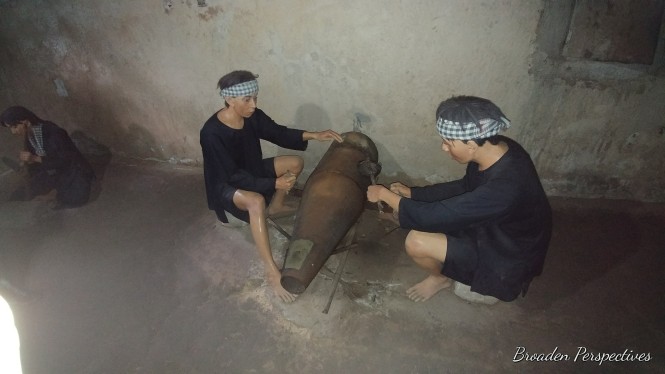 Example of workers carefully cutting open the bomb to access the explosive material.

Tapioca root and ground peantus with suger and salt.

The facility provides some cooked tapioca root (also known as cassava and/or yuca – I checked on Google) along with a mixture of ground up peanuts with sugar and salt (almost peanut butter basically). It was extremely simple but quite tasty. I guess during war times, this food was a staple. The Viet Cong prepared did their cooking underground with the steam and/or smoke being vented out in a few different vents. Cooking was done in the early morning hours so that any smoke or steam randomly coming out of the ground would blend in with the morning fog.

Rounds of rice paper that will be used for making spring rolls.

One of entrances (or exits?) to the tourist-accessible tunnel.

A tunnel has been dug so tourists can experience generally what it was like; however, the tunnel that you can access is larger than the actual tunnels were. I went into the tunnel for several yards but didn’t do the whole thing. I should have and could have.

There was a shooting range on the grounds. When we first got there, we heard a lot of banging and all I could think was that they were playing the sounds of gunshots to add to the reality of it all. Well, apparently there is a gun range on the grounds where you can pay $1/bullet to shoot large guns. You have to buy at least 10 bullets. Not high on my priority list so I skipped that expense. It was so freaking loud… I had to plug my one ear that was directed towards the range. 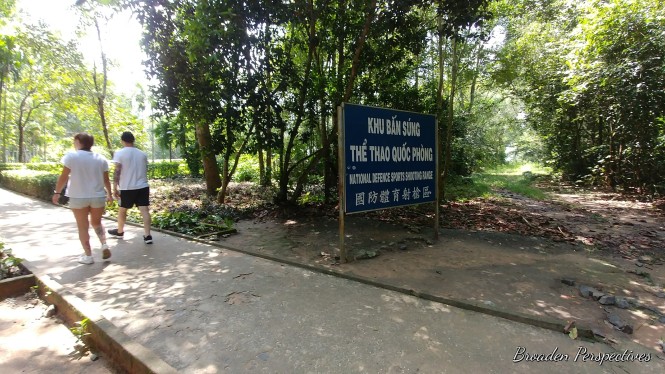 Our guide was drafted into the southern Vietnamese army. He had passed an English exam in school and so he began working as a translator and (in my mind) sort of liaison between high-ranking army officials for the Vietnamese and American forces. He had a good (I can’t think of the word he used and it’s driving me nuts) rapport or working relationship with the American officials that he worked with. He also carried the radio transmitter for the troops making him a prime target for opposing forces. He has visible, and not very visible, signs of serious injuries.

I was wracking my brain during this tour to remember what we had learned in Global History (American version anyway) in high school about this subject, the Vietnam War in general. I don’t remember hearing about the Cu Chi Tunnels.

One interesting fact I took away from my conversation with our guide is the following: Per the Paris Agreement “in French”, American troops were supposed to remain in the north part of the country after the war to help (I think to help ensure that the situation didn’t backslide). SIDE NOTE: I am not sure if our guide was saying, or meant, “in French” or “in France.” Either way, something was lost in translation or disregarded but apparently, US troops did not remain in the country as agreed upon. The local guide never received any compensation from the US government for his services to the US troops.

We didn’t do very much else when we arrived back at the hotel… We did pack up, check out, and get ready for our first overnight train to Nha Trang, Vietnam. We hopped on the train at about 8:30pm I think… but we didn’t go to bed! :-p Everyone was so excited to be on the night train and we all wanted to be together. The sleeper cars have small rooms with four bunk beds. So, everyone dropped their gear in their assigned room but then we all just started to congregate in one specific room until we did it! We fit 14 people into the 4-person sleeper-car room. And boy we had such a blast!

We arrived early at the train station and so just chilled out with our bags and bought some drinks and snacks for the night train.

This is the compartment I shared with three other girls (before all our gear and beds were set up).

Just wait… this isn’t even everyone we fit in.  See the videos below to join the party!  :p

The videos below were shared on our tour group facebook page. Since facebook apparently doesn’t have a download feature for videos like it does with photos, I had to record the video playing on my tablet with my phone and upload that. Not the best quality but you’ll get the point. Turn the volume way up and you might hear the music. 🙂