Ha Long Bay is an approximate four-hour drive from the train station in Hanoi. We arrived in the train station about 5:30am and got right on the bus. On our way, we pulled into this drive with a building that was pretty much a service area like on the NYS Thruway (minus the gas station – I don’t think they sold gas); we ate breakfast there and they had all sorts of snacks and souvenirs.

Waiting for the overnight train in Hue. 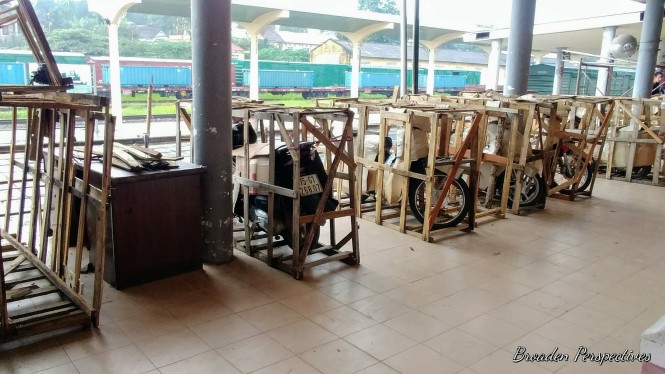 In Hue, I noticed these motorcycles all packed for shipping.  Apparently people come to more rural areas to buy used motorcycles and then ship them home. It’s cheaper than buying new or used in the city.

We arrived at our accommodation (Ha Long Bay Hotel) by 10:30am and had an hour and a half before we had to gather together and head to the marina for our afternoon cruise of Ha Long Bay. If you don’t know what Ha Long Bay is, you need to search Google Images right now. I was super excited to finally be here and then I realized/found out that we were only here for one afternoon, a half-day tour basically; my heart sank slightly. The other thing I was slightly disappointed about was the extreme haziness that was in the air the whole time; you couldn’t see very far which I was a bit sad about because I wanted to see so much further! Anyway, what time we did spend and what we could see there was amazing.

There were some interesting toll booth structures and this was one of them.  Since I happened tobe sitting in the very back seat (very unlike me), I was able to get a nice shot out the back window.  I might just sit in the back seat more.  Usually I am a front and center kind of girl.

This was another interesting “gate” structure over a bridge on the way to Ha Long Bay.  Not sure exactly what its structural/load-bearing purpose is but it looks cool.

We caught our private boat which was beautiful inside; all set up for lunch on the water.

Our private cruise boat. “Private” meaning it was just our group on the boat and not sharing with other tourists.

Our first stop in the bay was the Thien Cung Caves; really spectacular walk. 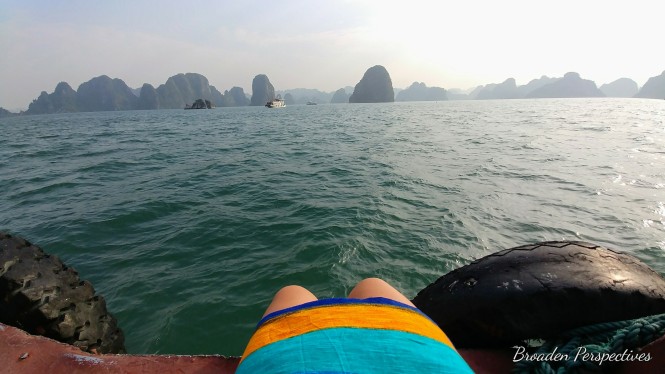 Cruising towards the caves.

View of the boat parking area outside the caves. 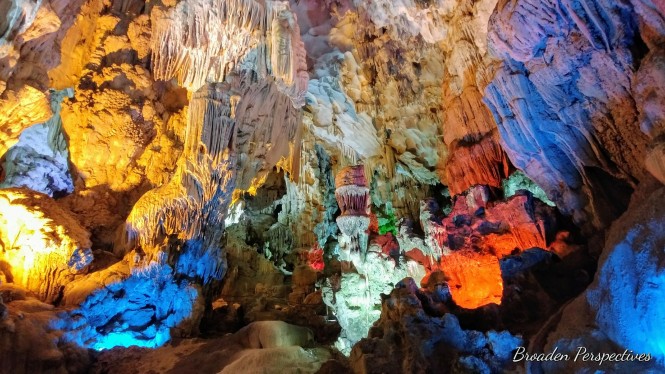 The next few photos are views inside the caves. I think our guide said that a lighting specialist from China designed the lighting in this cave. 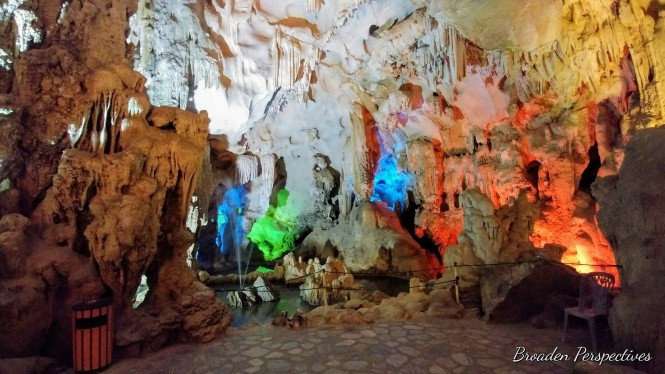 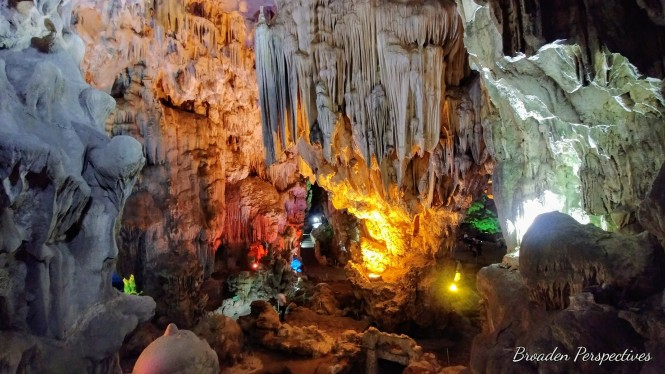 Our second stop was at a floating dock where they were set up to have tourists rent kayaks. We got to kayak around for about 40 minutes and wow did that go fast. Too little time but incredible scenery. I’ll let the pictures speak for themselves. Thankfully, the sky cleared just for a little while (basically the 40 minutes that we were kayaking) and it was blue sky and sunshine. 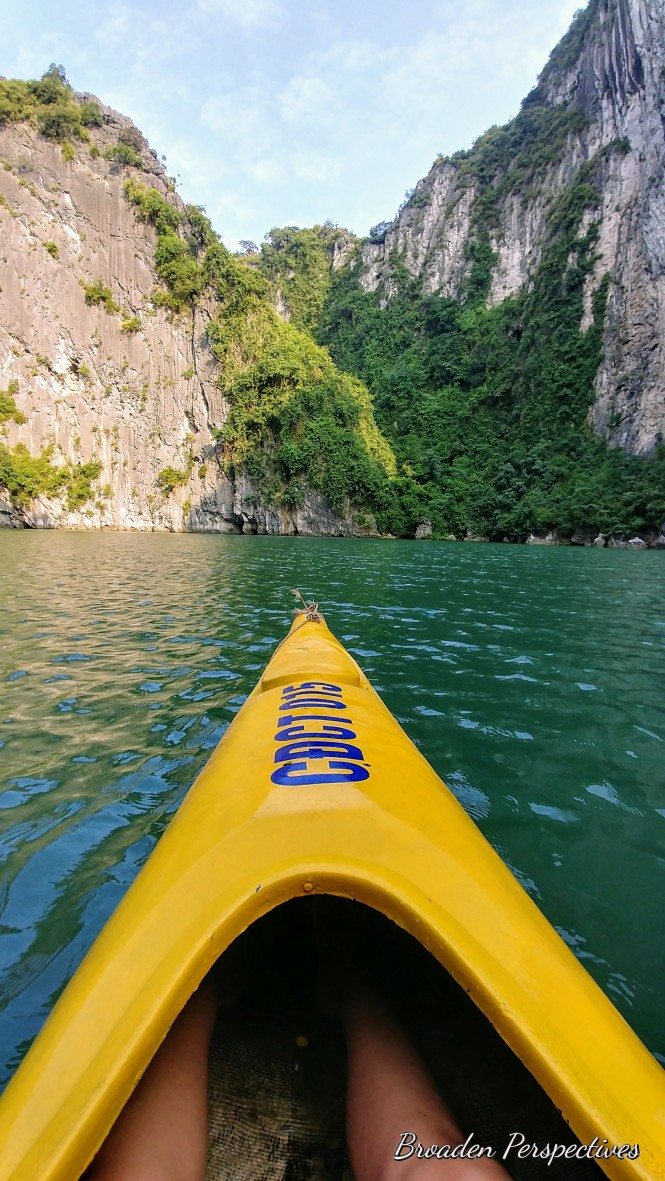 Finally on the water.

Kayaking through a small tunnel in the rock.

It was really beautiful. 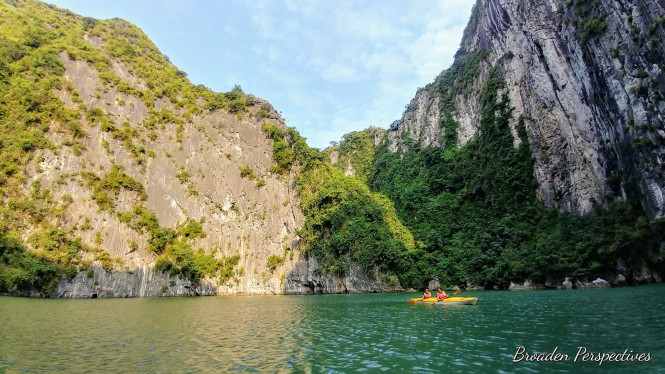 We kayaked through two tunnels.

Subsequent to kayaking, we got back on the boat and headed back to the marina. One thing we noticed was several small dead fish floating on the water as we cruised by. It made me wonder what’s going on with the water here and happy that I wasn’t planning to go swimming in it.

Back at the hotel, I decided not to go out for dinner. I wasn’t terribly hungry, I was tired, and I didn’t want to go to bed late. So I hung out with my tour group for a bit before they went for dinner and then I just went to my room. Funny thing: our hotel was right across the street from a night club that was BLARING dance music that was just so loud it easily penetrated into our rooms and we could have easily had our own party. My roommate Sandra and I wondered how we were going to sleep. Turns out, we both didn’t have much trouble and both fell asleep pretty quickly.

I was up pretty early. Breakfast was just fair. Today we were going to drive back to the City of Hanoi where we would be staying for a couple of days before our regional (yet international) flight to Laos where we’ll be spending about a week.

On our way back to Hanoi, we stopped at the Ha Long Pearl Workshop and saw how they farm pearls. It was pretty interesting to see how the plant the pearl culture into the oyster. We also saw them open an oyster that had been farmed and cut the pearl out of it…Not a pleasant process for the oyster.

Planting a pearl culture into the oyster. 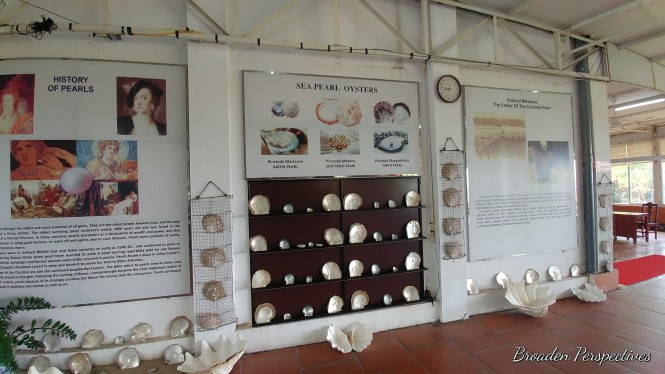 Pearl grading. The ones on the top of the triangle are the best, and the ones on the bottom are the lowest grade (most imperfect) pearls.

More mother of pearl side products.

Neat creations with mother of pearl. 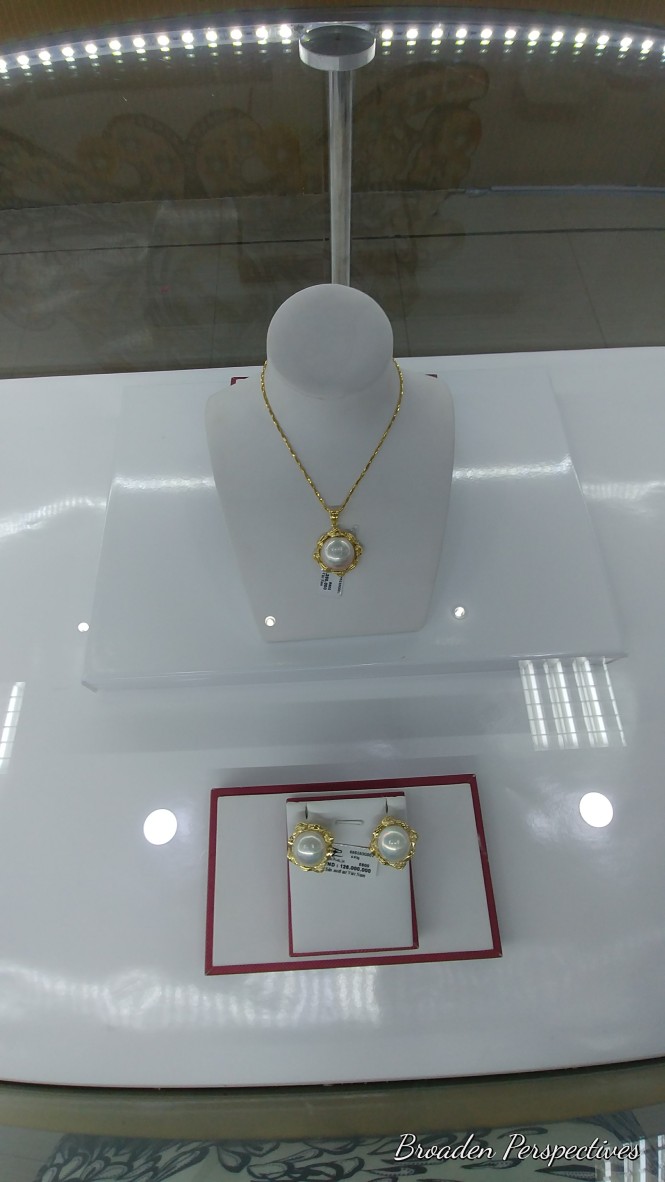 There was a pearl jewelry showroom. I should have taken a picture of the whole room. I was really big.  These had to be the largest pearls in the room.  They had to be at least the size of the tip of my thumb.

Not much to write about since I wrote on my blog all afternoon. Although, in the evening, we were going to have “family” dinner (i.e., dinner altogether) and, while our three new group members were going to arrive the evening of the 2nd, one of the girls arrived the evening of the 31st and met us right as we were preparing to leave so she joined us. Jessica is from Melbourne, AU and just finished University! Congrats.

After dinner, we ended up staying out for a while. Everyone wanted really cheap beer so our tour leader found some home-brewed(?) or at least locally brewed beer for 6,000VD (Vietnam Dong) which is ˜$0.26; You get what you pay for! Others thought it was fine but I could hardly finish it. We then went to another restaurant/club where the drinks were quite a bit more expensive (between 45,000VD [˜$2.00] and 100,000VD [˜$4.50]) but oh so much better than sketchy street beer. They had really good tunes playing too and our group just started singing along to them as loud as we could and we started just dancing in a close circle. I swear, we have the best group ever! At one point during this time, we ended up doing our first group hug!! 😀 I’m telling you, I’m so blessed and fortunate.

I was bound and determined to find some place to ship home some souvenirs that I had purchased over the last few weeks and that were taking up valuable space in my big pack. And I was successful. The hotel directed me to the Vietnam Post international post office. I knew it would be slightly expensive, but I wasn’t expecting to spend $50 to send a box (weighing 1.7kg) and four post-cards to America.

And I wasn’t anticipating to have to pay it in Vietnam Dong either. I really wanted to use my Sapphire card and get travel points for it! But no, they only take Vietnam cash. So, thankfully our new group member Jessica is an awesome person and lent me 500,000VD because I didn’t have 1,174,000VD on hand.

We went straight (well almost straight) to an ATM to withdraw some money so I could pay her back. Anyway – I love the gifts that I sent home and I really hope they all make it safe and sound. Especially a special gift that I bought at a Pearl Workshop in Ha Long Bay. Thankfully I got a tracking number for the package and it’s being sent via air and not sea (probably most of the reason it was so expensive).

Also, I sent out four post-cards to four different recipients. I wrote them October 18th (as I’ve mentioned previously) and was only able to mail them out now. I meant to write the date sent on them before I handed them to the postman but didn’t. Hopefully you should get them within a couple of weeks I would imagine. Really I have no idea how long it will take post cards and packages to get to America; I’ve never shipped anything from southeast Asia before.

After the post office, we just walked and walked and walked. We walked by the Ho Chi Minh Mausoleum, the One Pillar Pagoda, and the Hanoi Opera House. Lunch was somewhere in there as well. We also hung out at Highlands Coffee and chatted about traveling, long-trekking on the Pacific Crest Trail, how to get cheap flights to Europe, where we’d been in Australia, etc. Thoroughly enjoyed our time. We ended our walk with a stop at Circle K where we bought water and a San Pellegrino; we both felt the need for a shot of blood sugar.

This was a very wide walkway that was closed off to motorized traffic but you could walk through.

Now, I’m back in my hotel room resting and writing about my day.

Tomorrow (November 3rd) we leave Hanoi and catch our flight to Laos. I hear there are some awesome outdoor activities in store. Now that I’m all caught up on my blog it will be a few days until the next post but I’ll be in touch!

Stay tuned and thanks for following! 🙂