I had to be up 5am latest; catch the first airport link train to the airport at 6am to catch my 8:50am flight to Bali. I got up and initially didn’t feel bad at all… but that went downhill fast.

I started sweating, I felt weak, and just really bad; but not nauseous. Time was running on so I had to pull the last few things together pretty quickly because I was apparently slowing down. Our amazing tour leader was going to walk me to the airport link station… I continued to feel worse and worse. At the station but mostly on the train, I had to focus extremely hard (telling myself “Don’t get sick, don’t let the motion get to you, don’t get sick because there is nothing to throw up into!”). Finally at the airport, I went up a couple of escelators I think, and I just felt really ill. I saw a garbage can and the distinct thought hit me, I need to look around and see if there is a bathroom close by. There wasn’t… so my next thought was: I should not stray far from this garbage can. As soon as I was less focused on not being sick on the train and making it to a suitable receptor, I quickly got very nauseous and just… well, I think that’s enough detail. You get the picture.

The flight to Bali wasn’t fun. I was again focused on not letting the motion get to me. Thankfully, I have not had any more incidents since the airport and digestion has returned to normal.

Thankfully though the flight went smoothly, my backpack came from the baggage claim without too long of a wait. I was quite concerned that the flashlight in my pack might cause a problem at the Bangkok airport. I did have my ears peeled for a call to security to clear that up. I didn’t hear my name called though. My nightmare would have been that the flashlight would have held it up at the airport, that I would have gotten on the plane and it wouldn’t have; that I would get to Bali and find out that my pack (with everything!) would still be in Bangkok, unable to move due to a flashlight.

Third glimpse… me and Bali (technically the “Welcome to Bali sign.”)

Yea…. my tired ill brain was running all the worst scenarios. Thankfully, like I said, my pack came on the baggage belt and a wave of relief washed over me. I met up with my internship-guy without any trouble, and had a nice ride to Ubud from Denpasar. It’s rainy season now which means that pretty much every afternoon it will rain… at least I’m finding that to be true. It’s fine, it gives me time to do other things, but not nice because I really need to drop laundry off to be done! I’m out of clean clothes.

I slept from about 6-ish until about 4:30am either when the roosters start crowing and the sun starts coming up. The sun goes down between 6-6:30pm and comes up around 5 I’m pretty sure. It’s only been a couple of days so I haven’t studied it too closely.

I woke up feeling pretty apprehensive and anxious about this next step; asking myself the question I always end up asking myself when I start something new: What have I gotten myself into? But, once I got myself showered and ready for the day, breakfast done, and occupied with the internship, I was fine. We did several random things yesterday. When we were first pulling out of the driveway on my intership-guy’s motorcycle, we realized they were chopping down the trunk of a dead palm tree. There was a skinny but super-rugged guy that climbed the tree with his bare hands and feet. He would secure bamboo stick to the trunk that he could stand on while chopping while a few other guys were holding a rope ready to pull it once the chopper chopped enough away. They cut it down in I think three sections. I missed getting a video but I do have a couple of pictures.

After that, we had to go pick up dried, ground moringa leaf from a lady somewhere between here and Denpasar. My internship-guy (well, actually, I’ll just introduce him in the next paragraph) built a couple very small, simple houses with adjacent garden that grows banana, papaya, and moringa trees. These houses are for families with disabled children and so the garden provides some sort of income supply as well as nutrient-rich supply of moringa. So internship-guy buys the meringue from this lady and sells it to a client here… supply chain building. After that, we had to visit an electrical supply house for some wire, came back home for lunch, then repackaged some pretty new rice, and delivered the powder and rice to the client. 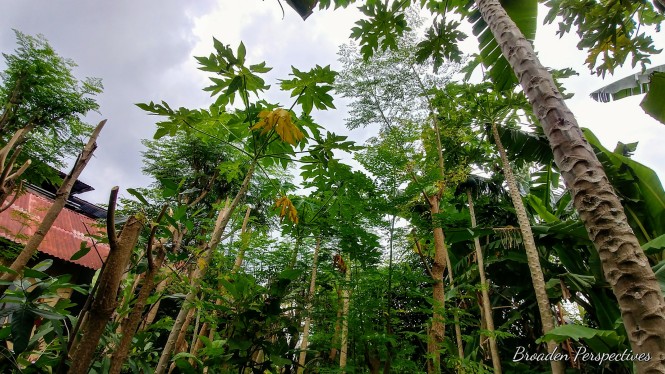 Moringa is very nutrient-dense; you can eat the leaves of the tree by either steaming it, drying the flowers for tea, or by drying/dehydrating the leaves, grinding them into powder and sprinkling them on your food.  It’s the small tree with very small leaves (center/right top of the picture), not very different from clover leaves; maybe slightly bigger and on a tree.

Ok; internship guy. His name is Chakra and he founded the organization “Tri Hita Karana Bali” (here is the link: https://thkbali.wordpress.com/about-thk/). So this is who I am working for.

If you’re interested in volunteering here, let me know.

I found the internship through Global Nomadic, a company based in England.

Oh, also, the internship provides a scooter for the duration. So, I practiced riding that around the parking area for a few minutes and then later in the day I followed a lady I met that is living here for a tour around the area to get acquainted.

Today, we collected moringa seed pods and leaves, then went to pick up corn seeds for planting, and then I helped plant a bunch of corn seeds by hand in a small field.

We also went to see a house that Chakra helped design that is being built using reclaimed wood. He also designed the waste water system.  The house sits overlooking a hill down to s stream with a small waterfall that isn’t easily seen. But it’s really beautiful area that is quickly changing rice fields to development of resorts and places to stay. 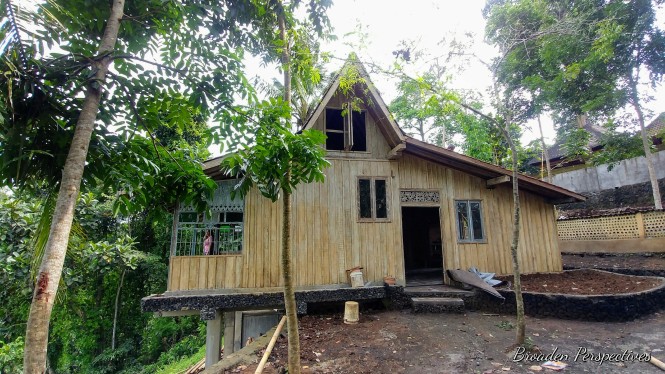 Building a home out of reclaimed wood.  The wall you see in the background on the right-hand side is made of cement (I think) and recycled glass bottles… much cheaper than brick apparently.

View of the hilly rainforest right outside the reclaimed-wood house.

Today I also managed to get myself into Ubud and back by myself on my scooter; a small step that feels pretty big.

Not much else to report. I’m up to date and hence you’re up to day.  I’m not sure what will be the best way to keep you updated now that it doesn’t really make sense to do it by place or city visited. I feel like I will just start droning on about things happening. I’ll try to post every few days and if I do start writing tediously, please let me know!