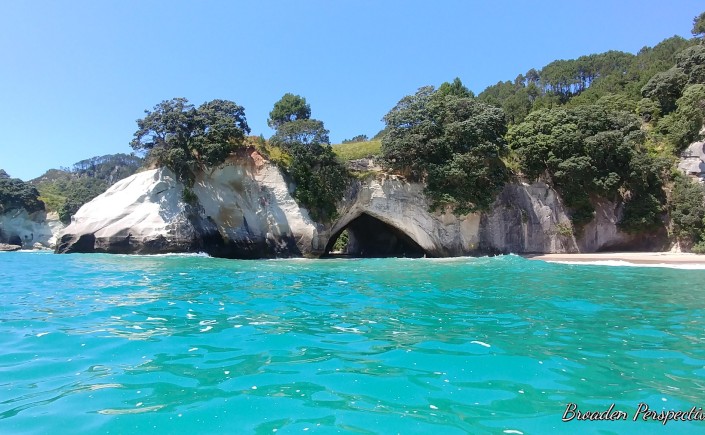 What to say about Hahei….

I left the hostel at about 7:15am to get to the pickup spot not very far away. Our bus today was a step up from the bus to Paihia. More backpackers are heading south than north so they need larger transportation.

The drive there wasn’t particularly beautiful, but it was enjoyable. I was way in the back of the bus (not my usual choice for seat location) and not next to the window. We did drive on this very curvy and hilly road that reminded me of driving from Vangvieng to Luang Prabang in Laos. I really had to focus on watching the outdoor surroundings because I would have easily gotten motion sickness on that road. Thankfully though I didn’t. We did stop at one really nice scenic viewpoint when we were approaching Hahei.

View from the scenic area stop on our way into Hahei.

Hahei is a tiny little town on the east coast of the north island of New Zealand. When we checked into our accommodation, the resort manager (for Stray trips at least) said he thought it was the most beautiful beach in New Zealand. Initially, I didn’t really believe him; I took it with a grain of salt and thought “don’t locals say their town attraction is the best?” Well, I stood corrected when I went to the beach the next morning.

We stayed at the Hahei Holiday Resort on Harsant Ave; beautifully and well maintained place. They have a whole area with bunk houses, a full kitchen, BBQ area, picnic tables in an enclosed area as well as outside. This is their “Stray Tours” area. However, for the public, they have camping areas as well as little cabins (not wood cabins) but more simple accommodations with (at least inside the one I glanced in while walking by) appeared to have a tiny kitchen as well. The bathrooms are communal but (at least the bathrooms in our Stray area) were extremely well-kept and clean. Highly recommend this place if you want accommodation right by the beach! Here is the link: (http://www.haheiholidays.co.nz)!

We arrived in the early afternoon, had a little time for lunch, and then had to get ready to go to “Hot Water Beach.” It’s not far away from the town at all; approximately 10 minutes on a bus, so probably 5-10 minutes by car. Our bus driver brough shovels but initially I didn’t know what they were for. So when I got on the bus I jokingly asked “What are the shovels for? Are we burying a body?” LOL. Nope…they were for digging down into the sand a couple of feet and accessing geothermally heated HOT water to soak in. There’s vulcanic activity underneath. I did not feel like getting very wet so I didn’t actually soak my whole body. I went for a long walk on that beach. I did put my feet in the water and wow… seriously hot. The water in the little pool that was dug wasn’t terribly hot, but as I walked past the crowd of people, there was some water that was running out of someones pool that they had dug and that water was very hot. I couldn’t stand in it for too long unless an ocean wave reached my feet to cool them off. It wasn’t a particularly warm day, but it wasn’t particularly cold either and you could still see steam rising off of this hot water. Really cool. It didn’t smell of sulfur either which was kind of nice. 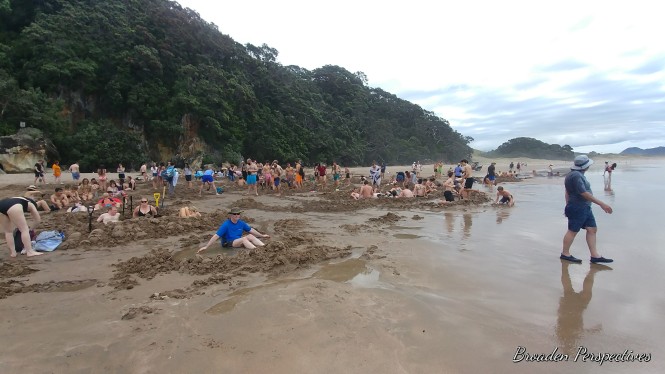 Hanging out at Hot Water Beach outside of Hahei, NZ.

The next morning, I woke up before most other people (not surprising) and decided to go check out this “beautiful beach.” It is the most beautiful beach I’ve been to so far in New Zealand. It’s not a beach where there are miles and miles to walk. I bet the whole walkable beach is less than a mile. But it is a pristine beach with an incredible view.

Pano – trying to capture it and send it home!

I had signed up for a Hahei Explorer boat ride for late morning so at 10:30 we, a couple of my travel mates on the bus, the bus driver, the bus co-pilot (driver in training), and the resort manager were picked up. 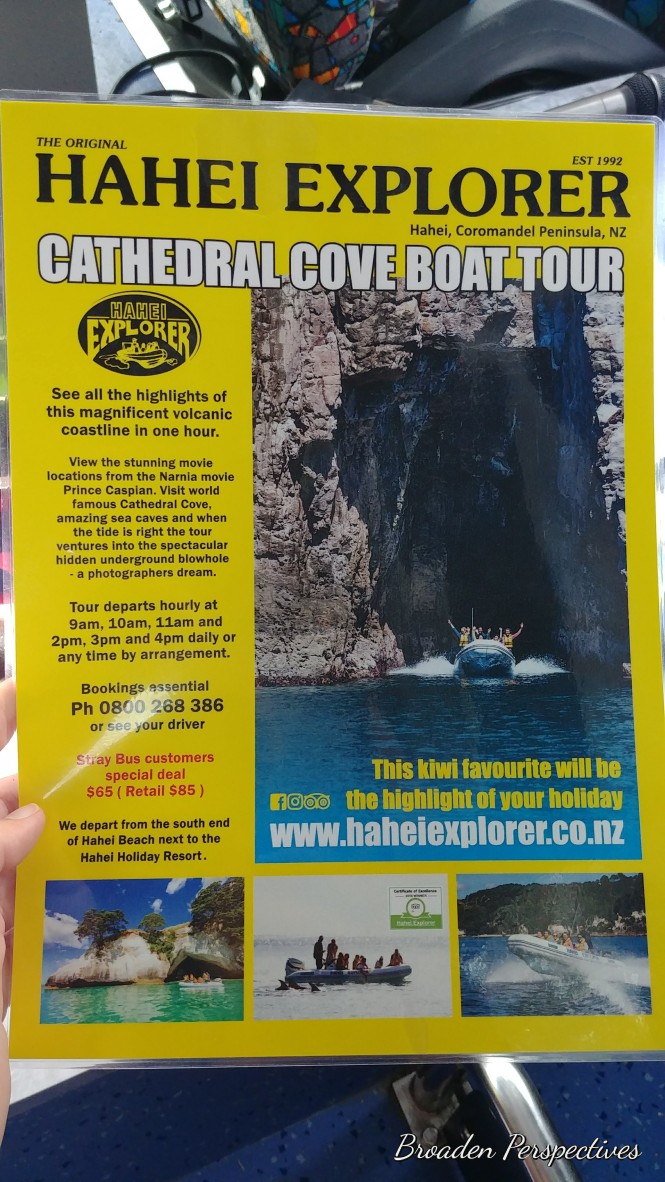 Seeing the coastline from the boat was really, really incredible. It was an inflated dingy-type boat but larger, and so you felt every wave. Talk about waves, we got out into unprotected coastline area and had some “meter to meter and a half” (I believe that’s what he said) swells out there. It was so fun flying over these swells on this little boat with a pretty awesome motor on the back of it! 😀 Here’s some photos/videos of what we saw.

Opening to a blow-hole.

View inside the blowhole from the entrance.

Looking up out of the blow-hole.

This is a short video of zooming over the waves. 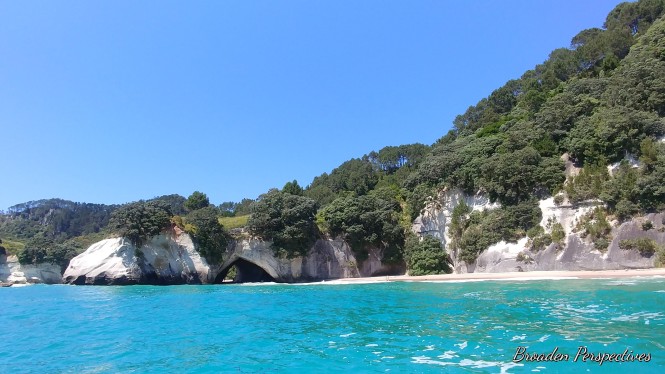 There it is! Cathedral Cove that was used as a filming location for Chronicles of Narnia, Prince Caspian. 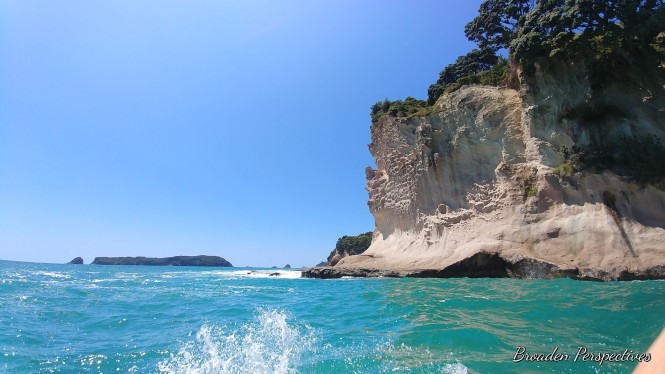 The view a little bit past Cathedral Cove 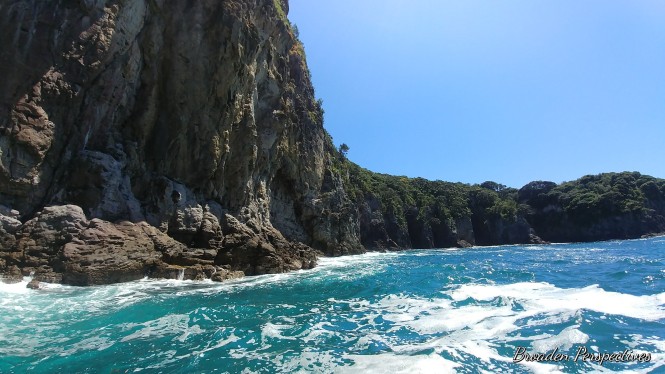 Little island cove that’s across the bay from Hahei Beach.

Shark Tooth Island… because it looks like a shark tooth.

The boat driver fed some snapper fish.  They are in a protected fish reserve area and so you can get fined a LOT of money if you catch fish within this area.

After we got back from this cruise, I decided to go to the beach and chill out for a little while; catch some rays which doesn’t take long here at all due to the ozone hole. I didn’t want to have my towel directly on the sand since I had been using it every day for showers and didn’t want any sand on me after I showered, so I thought about what I could use as a beach towel instead of my shower towel or between the towel and the sand….

I found a use for my hammock which hasn’t been taken out of its bag (with the exception of NZ customs inspection) since I left the US. 😦 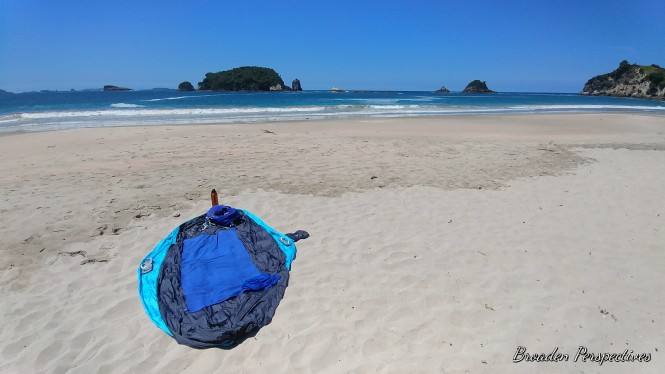 I don’t know if it was the lack of a strong sea breeze where I had set up or what but there were a lot of tiny flying/biting bugs that landed on me and started driving me nuts. So for part of the time I was just standing in the surf, enjoying the sunshine and taking in the views.

I went back to our accommodation about an hour later because I didn’t want to get burnt too badly and I was getting hungry. Most of the rest of the afternoon, I wrote for my blog until about 4:30 when our resort manager showed up and reminded us that we were going to a local craft brewery for drinks. This brewery is called The Pour House Bar. Really nice place! Worth a stop if you’re there. Some folks stayed for dinner but since I had rice and veggies back in my room, I decided to save a few dollars and use up my few groceries.

Today was a travel day from Hahei to Raglan, across the island to the southwest. Me and a few other people got up early to watch the sunrise on the beach. I wasn’t convinced we were going to see it because it was a bit overcast where the sun was supposed to come up. But, the clouds split just in time! 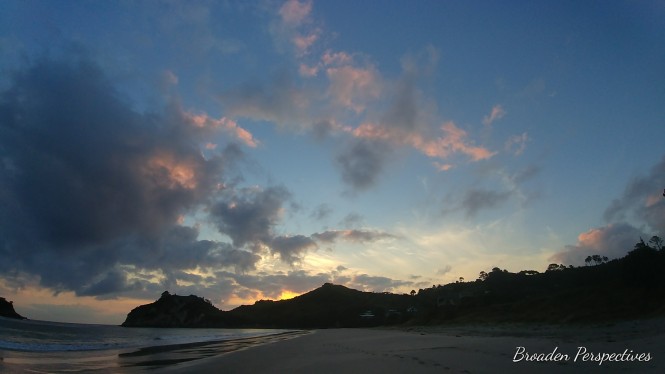 First glimpses of the sun coming up over the hill in the distance. 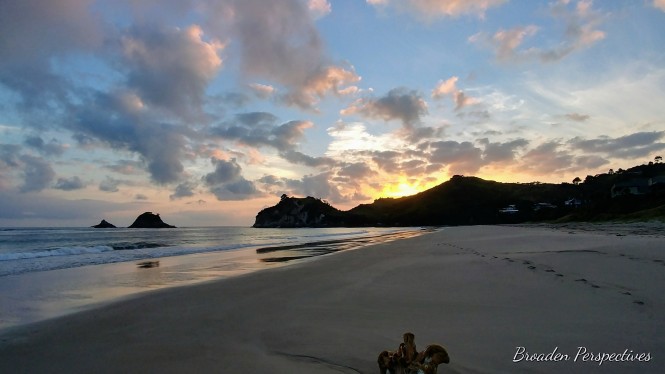 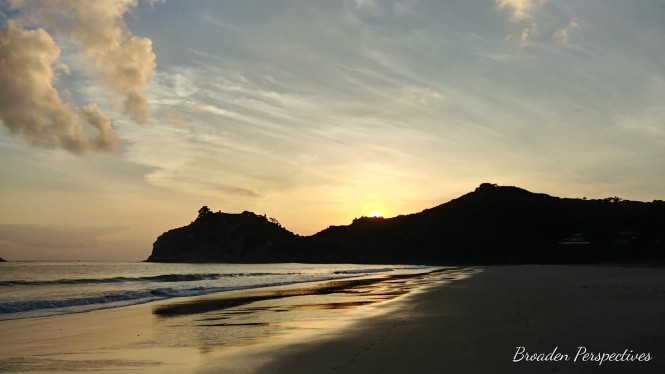 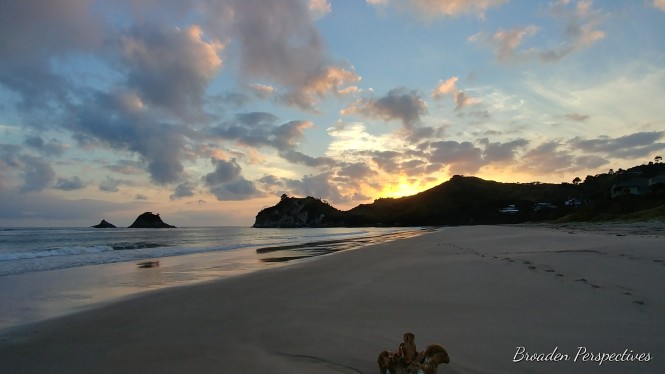 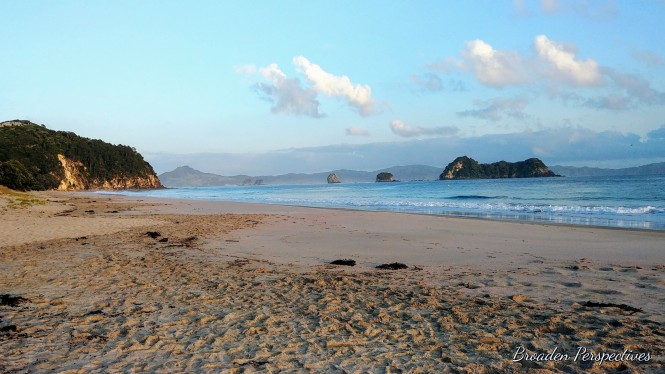 Looking the other direction from sunrise.

On the way to Raglan, we stopped for a quick walk at Bridal Vail falls off of Kawhia Road near Makomako and Te Mata, NZ. It’s a short walk but with a lot of stairs to the mid-point and lower falls viewing areas.

View from the top of Bridal Vail Falls

Another angle but still at the top of the falls. 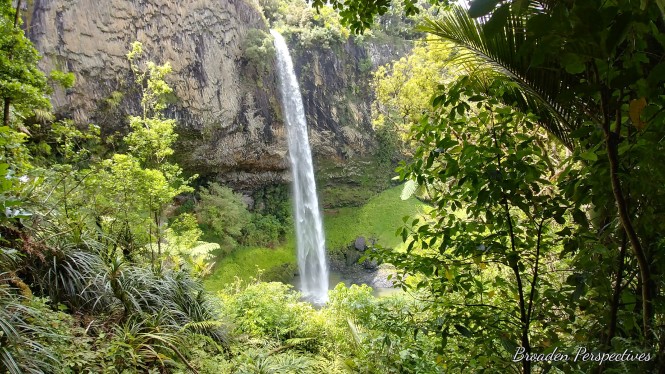 Mid-point view of the falls. 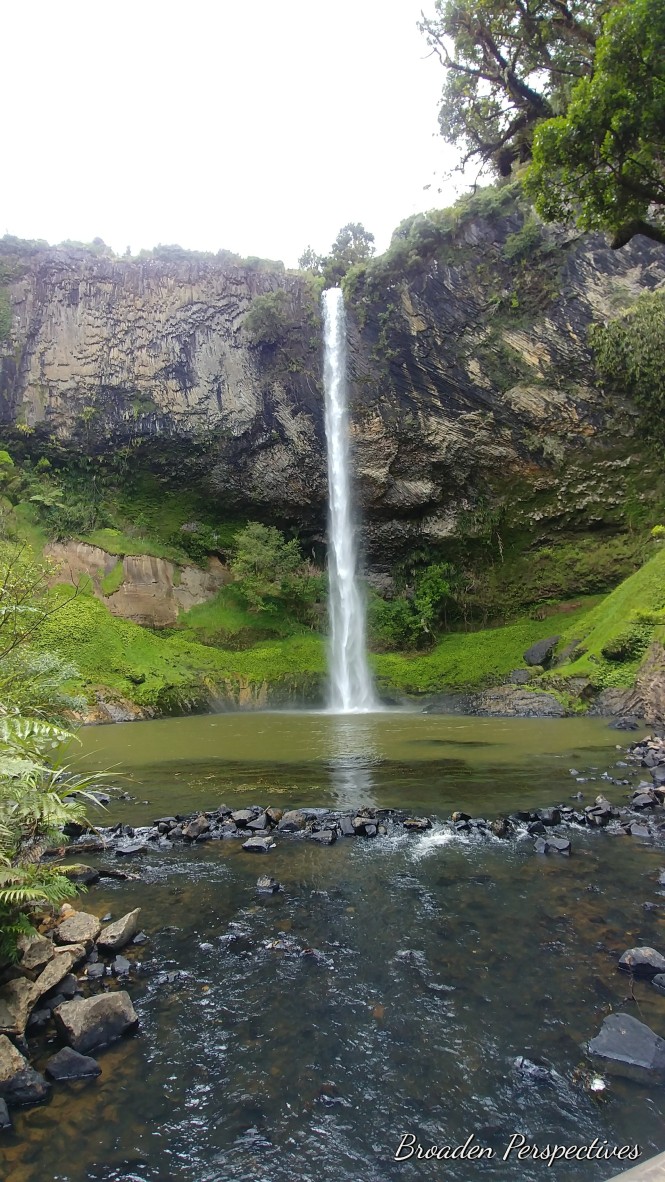 View of the falls from the bottom.

After we left the falls, it wasn’t too much further to Raglan. We stopped in town to get some groceries before going to our accommodation since it was pretty far out of town. I quickly got some breakfast food and then went to get something for lunch. I had run out of breakfast food the previous morning so I had just drunk the rest of my soymilk for breakfast and therefore was starving by the time we had gotten to town! A little place called Roll Up on a little back shopping area in Raglan makes a delicious vegetarian burrito!! Yummy!!!

While walking the short distance from the bus to the grocery store, there were kids on the sidewalk showing their poster board projects. As I was walking to the store I thought “you should take pictures of these posters now before you have groceries in your hand.” But I didn’t, and once I had bought groceries and lunch, the kids and their posters were gone. I’m sick about it too; each poster talked about a different current events issue. Topics included immigration (refugees), coral reefs dying, global warming, and other serious issues that I was surprised and impressed that the schools have kids seriously thinking about these things!

Raglan is a very chilled out surfer/hippie town. I could stay there for a while!

This is the view shortly before turning into our accommodation driveway.

View of the water from a scenic point in Raglan near the surfing school. 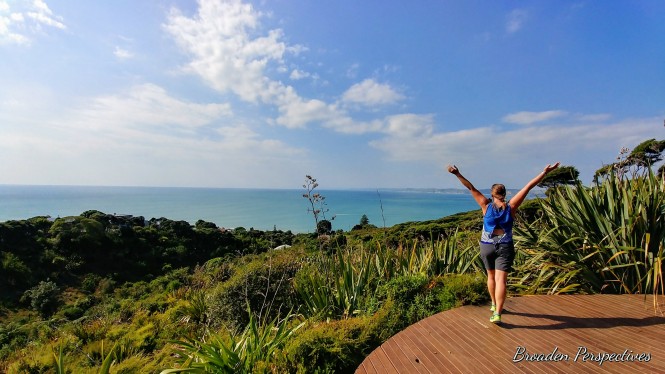 Feeling FREE!!! Messing around with pictures at Inspiration Point.

We stayed at the Raglan Surf School – pretty cool and very chill place! 😀

One of my new friends and I went for a walk to Inspiration Point (5 minutes from the surf school bunk houses and kitchen area). We subsequently walked a loop trail around the top of the hill. The trail was very well-marked, but it was pretty dense forest and not being very familiar with the area, I was ready to turn around a coupe of times. But my friend said no, lets keep going. Finally we saw a sign that said “Lodge, 30 minutes” and so we did and finished the whole loop; it took about an hour. 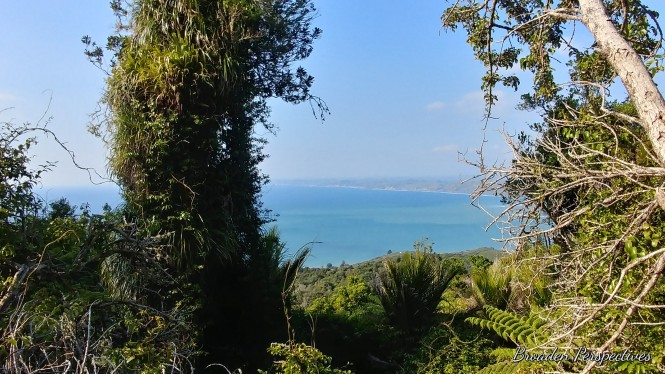 There was a huge fallen dead tree that had clearly been climbed on by other people and so I climbed up to see a view that had otherwise to that point been elusive.

After that walk, it was pretty much shower and bed time. Although, I did cook dinner and in the process, I somehow thought of eating my crackers with peanut butter and sliced banana and went into a full-on craving! Short of shaking, I asked a couple of girls that I knew had peanut butter if I could use some. Thankfully they said yes and so I ate half a pack of crackers and a whole banana with peanut butter. Craving satiated, I then went to bed. 😀