Finally! I’ve been super excited for the day to finally be here for two awesome activities! Today is the day to see the famous Waitomo Glow Worm caves and Hobbiton; the movie set from Lord of the Rings and the Hobbit movies!

We had a little bit of a drive to get there but not too bad. There were a few different activities that you could do; a wet and active tour where you go caving and abseiling, a wet tour where you go cave tubing, and a dry tour where you just walk into a cave and get in a small boat. Since I haven’t invested in a GoPro, I had to do the dry tour if I wanted to get my own photos. It happened to also be the cheapest optional tour to see glow worms. The others were over $130NZD. I’m trying to save my money for at least one and possibly two more skydives. So, I really have to be choosy with what I do. But, I had to see the glow worms somehow and also do the Hobbiton Tour which was $99NZD (the normal price is $79/person) but ours included transportation from Hobbiton to Rotorua (approximately an hour away). Our Stray bus was dropping us off but wouldn’t be picking us up.

Back to the Glow Worm caves; the dry tour was with Spellbound Glowworm & Cave tours in Waitomo. This tour provider takes you out-of-town to some farmland where there are caves. Spellbound is the only tour provider that is allowed by the owner to access the caves for tours so it’s pretty quiet there. Not too many people at all; not crowded. It’s in the middle of nowhere with sheep all around in the fields. They driver dropped us off a little bit above the cave entrance and had us follow a little path down to the stream that runs into the cave.

View of the hills near the cave.  The while little gravel you see in the upper left quadrant is the parking area for the cave entrance.

Our driver told us that the island had experienced a 5-year drought and as a result farmers had to import hay for their livestock. As a result, hay was imported and used that contained thistle seeds and now the farmers are having a hard time getting rid of all the thistle plants that can be seen growing in their fields.

Down at the stream, our guide/driver started throwing some pieces of bread into the stream to attract eels! At first I only saw one but then more and more came. It was really cool! I’ve never seen eels like that before! They’re pretty neat creatures; like super elongated fish with no fins. 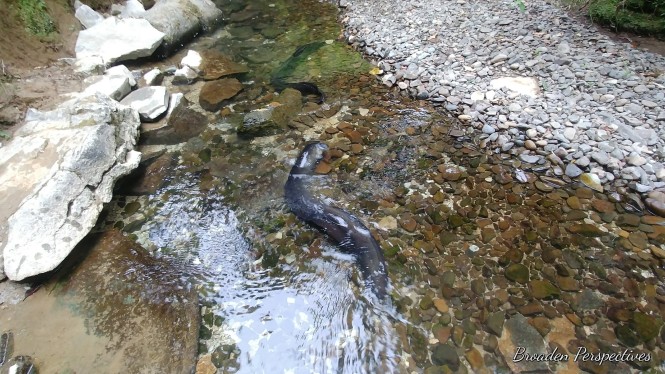 A couple of the bigger eels were pretty friendly. The guide said we could go down to the water and pet the eels. I had to try that!

After that, we donned plain white hard hats with head lamps and walked into the glow-worm cave. it wasn’t far in when we all gathered and were told to shut off our lights to let our eyes adjust to the darkness so we could see the glow worms more clearly. After about 5 minutes, our eyes adjusted a bit. We then walked (with some light) to go get in the little boat. There, we sat for a few more minutes in the dark to let our eyes adjust more. Then the guide unhooked the boat and guided it using ropes secured to the sides of the cave channel. It was a pretty short distance before he started turning the boat around acting like we were going to head back to tie up the boat. I thought “This can’t be it! It can’t be over; we’ve only seen the glowing worms for 10 minutes!!!” Thankfully though before we docked he turned the boat back around a second time. Our eyes were very well-adjusted now to the miniscule amount of light the worms put out and could make out the walls of the cave, the water surface, and obviously the ceiling of the channel as most of the glow worms were there.

It was really hard to get a good picture of them because there is so little light that you have to take a long exposure photo. This, in a perfect world, takes a tripod so that the camera is holding perfectly still while being exposed to the light. I took a few different shots that looked like little squiggly lights. Thankfully though, after several tries and settings adjustments, and a walkway railing to steady the phone on, I was able to get a few (in my opinion) good shots!! Take a look:

One of my first attempts at taking a long exposure photo by holding as still as possible. 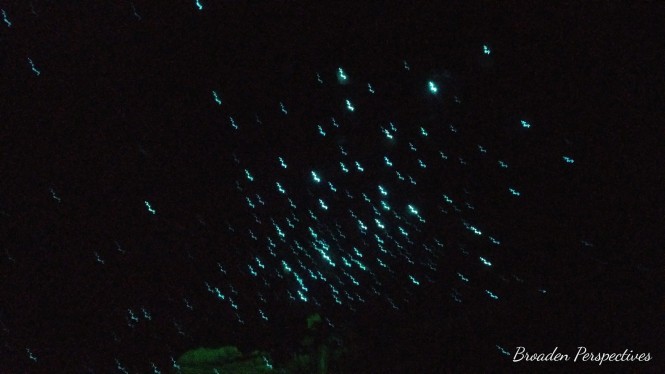 After a few more attempts and settings adjustments…getting better. 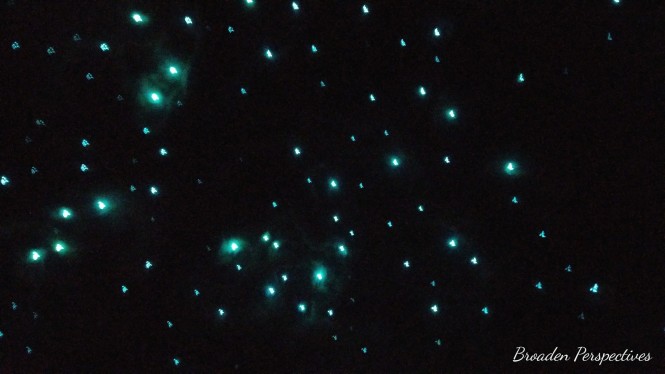 After some more attempts, this is my second best long-exposure photo. 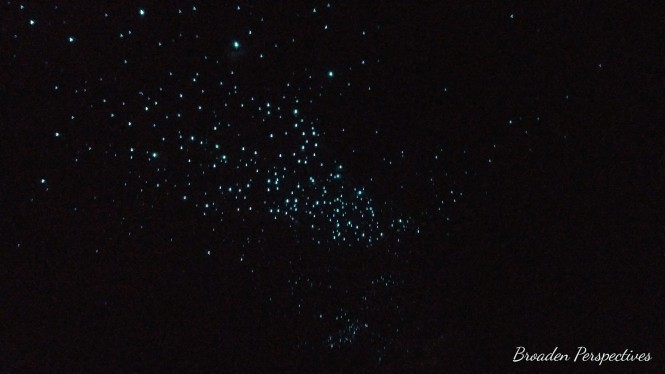 This is my best long-exposure image I was able to get by balancing my phone on the hand railing so that I had at least one direction of no movement.

Here are some pictures that the cave tour company sent us… keep in mind these were taken with a super specialized camera and settings on a tripod! 😀 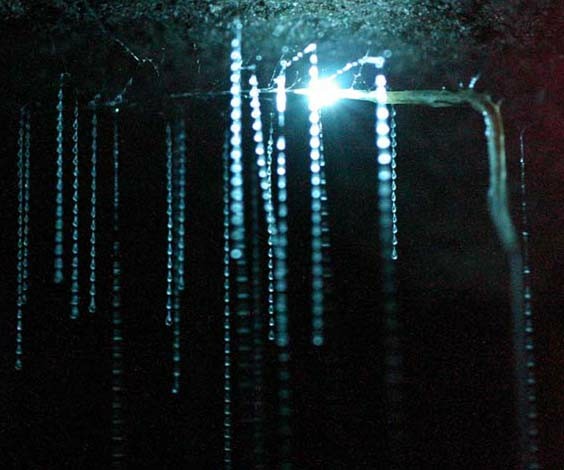 The worm drops down these tiny single-strand sticky webs to catch unsuspecting insects.  Those droplets have an acidity/pH of about 3.  Apparently some scientist came and studied these.

Another cool photo.   The strands hanging down from the worms aren’t bioluminescent… just the worms that are a single dot of a light.  The photography makes it look like the strands light up.

That’s what the strands would look like if the cave was all lit up.

After the glow-worm cave, we walked into another cave with significantly fewer glow worms… but it was just to see the caves. It was alright, not as impressive as some other caves I’ve seen. I did get a pretty good long exposure shot of a beam of light entering the cave from a whole in the earth above. It’s a little blurry; I tried getting a better shot but it didn’t work because others were also taking photos and shining flashlights which messed up my images. Oh well.

I think it’s pretty cool seeing that beam of natural light come into the cave.

After we got back to the Glow worm check in and cafe to wait for the bus. Onto our next stop: Hobbiton! Seeing this movie set hasn’t really been a serious item on my “bucket list” but I really do like the Lord of the Rings movies so I mean, who really wouldn’t want to see it?!? So, as we drove towards the set, the landscape became very smooth, rolling hills with sheep wandering around; it was so picturesque and serene.