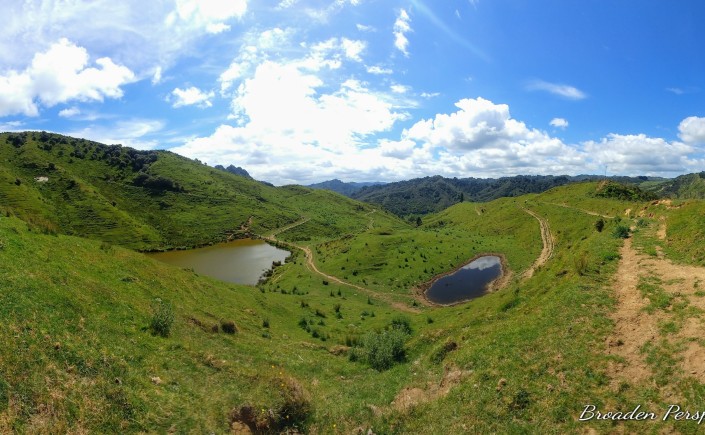 I had to catch the bus leaving Taupo at approximately 12:45pm and so I was characteristically ready and waiting by about 12:35. Our bus was late though and had me starting to worry that we were either in the wrong place, had somehow missed it, or whatever other scenario. But finally, we saw the large orange beast come around the corner. Our driver, nicknamed “Lefty” (because apparently he’s left people who are late) is quite the character. Anyway, got on the bus and had to sit in the way back because people were already settled in their seats from the morning ride from Lake Anewhenua.

On our way out of town, our bus driver said we would be making a stop further down the lake where there are some rocks that you can jump off of. One of the other girls on the bus that I knew piped up and said there was a blue-green algae bloom at the northern end of the lake and that swimming had been restricted. I wasn’t terribly surprised by this as there was the water treatment plant with pipeline into the lake. The driver countered her statement saying that the swimming restriction was only for the north area of the island (there was a name to it but I don’t remember since I’m so far behind in writing!).

So I had made up my mind to just watch people jump in and not participate. But, then we pulled over, crossed the street, and walked to a small 15-foot (or about there) cliff of rocks with sparkling clear blue water just calling and shouting to be jumped into and I couldn’t resist. I really couldn’t resist when people where being a little bit too chicken to jump in. I thought “I’ll show them!!” So, took off my shirt (had my sports bra that I swim in sometimes on) and jumped in!! Wooohoooo!!! That was amazing! 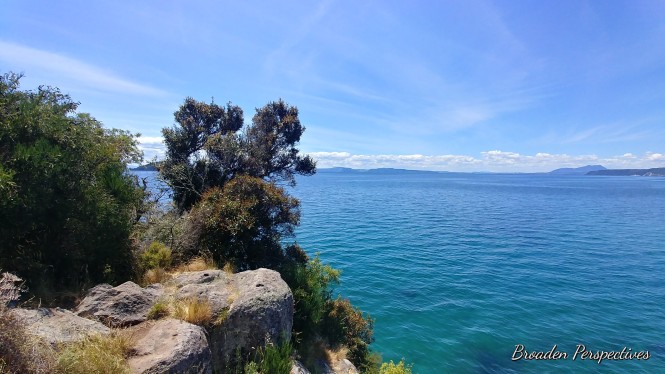 View of Lake Taupo from where we jumped in (Google Bulli Point, Taupo Lake) on State Highway 1.

We only stayed there for about 20 minutes or so. You had to climb back up out of the water on some rocks and a big root sticking out of the ground. The rocks got pretty slippery when wet so climbing up was pretty sketchy. I only jumped in once as I didn’t really want to have to climb up again, but I am so glad I did it! Moving on; we made a stop for some groceries and then pushed on. We drove through Tongariro National Park and made a photo stop to see the peaks of Mt Tongariro and Mt Ngauruhoe (Mt. Doom in Lord of the Rings); then pushed on.

View of the two mountains.

When we turned onto the last road we had to take into Blue Duck Station, our driver stopped the bus for a minute and directed everyone to pull their breakables (mostly drinks purchased at the grocery stop) down from the overhead shelf, to buckle in, and get ready! The road was reportedly horrible and very curvy. So, we did and he was right! To kick off the drive on this road, he blared AC/DC’s song Highway to Hell to get everyone in a “this is an awesome part of the adventure” mood! It worked for me at least.

The road was paved at first and was very bumpy and remember, I’m in the way back of the bus so the bumps were amplified. Then the road went to gravel and was washboarded in some spots. There was a cliff above on the left side of the road and a cliff down to the river on the right side of the road. With the bus swaying precariously flying down a gravel road, I might have prayed a little bit for the bus driver to keep us on the road. 😀 We were only a few kilometers away from our accommodation when we ran into a major traffic jam….of sheep. Sheep were being herded down the road and causing a bit of a delay.

So the bus driver slowly moved forward with the sheep and apparently some started going in front of the bus and so he gently moved a little bit too far to the left and slid into the ditch! The bus got stuck. And we were in the ditch on the left side and so we were stuck in the bus because the door was pinned shut by the bank of the ditch. I mean, it was a very gentle slip into the ditch and it wasn’t very deep and we were in no risk of tipping the bus. It really was more funny than anything. It all just became a part of the adventure of the drive. The owner of Blue Duck Station happened to drive by and started talking to the driver; he radioed for a couple of the farm trackers to come and pull the bus out of the ditch. 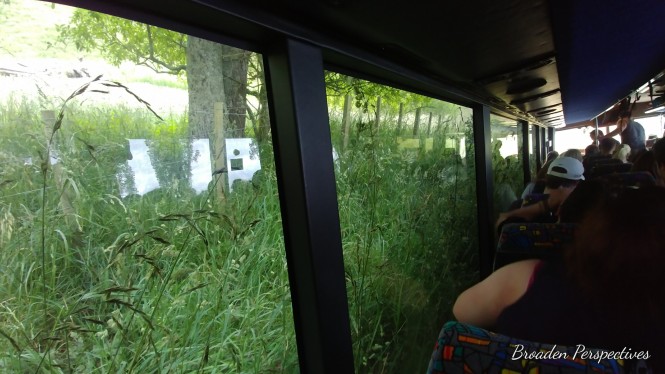 Those weeds look pretty close to the bus window.  That’s because THEY ARE!  Hahaha.

Here’s a video showing the dirt caked on the bus from being in the ditch.  😀

Those of us in the back of the bus started joking that we should change Lefty’s nickname to Ditch. Later during our time at Blue Duck, I was thinking further what we could call him and it came to me: Left Ditch. It would maintain his “Lefty” bit of the nickname, but it would also capture his slip into the ditch on the left side of the road. 😀 HAHAHAHAHAHAH. Yea, I kinda tickled myself when I thought of that. 😀

We finally made it to the Blue Duck Station cafe and reception area. I saw a sign shortly before we pulled in that said “Whakahoro (Pop. 8)”…. pretty sure that means that the population of Whakahora is 8 people. It might be a little more impressive if they put the population of sheep. Blue Duck Station farms ˜4,000 sheep and some beef cattle I think. I didn’t really do much once we were arrived and checked in and settled in our rooms. I had a lot on my mind that I wanted to write about in my journal. It was a good time for it (and not writing for my blog) as there was no Wi-Fi and no cell reception out here. We were super rural if you couldn’t tell by the population of 8. But I loved it. It was so quiet there.

Either our bus driver or one of the hosts at Blue Duck Station told us yesterday that it was sheep shearing time. I wondered what was happening because not far away I heard the loudest, busiest cacophony of sheep bleating that I have ever heard! I had gone to bed rather early and woke up pretty early (possibly due to the lack of oxygen in the room with 6 people in it and the windows and door closed). So I threw my clothes on since everyone was asleep and went for a little walk. The sun was just coming over the hill.

Pano view from our lodge. 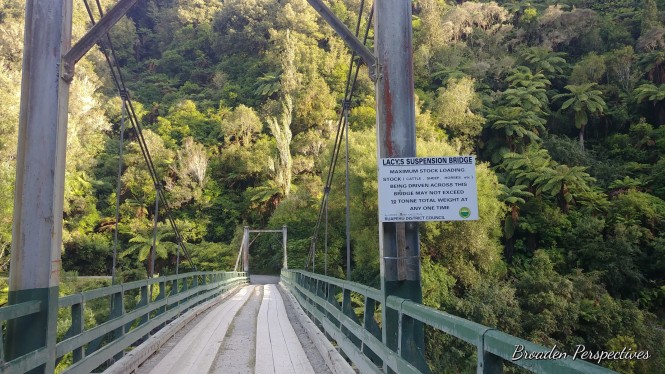 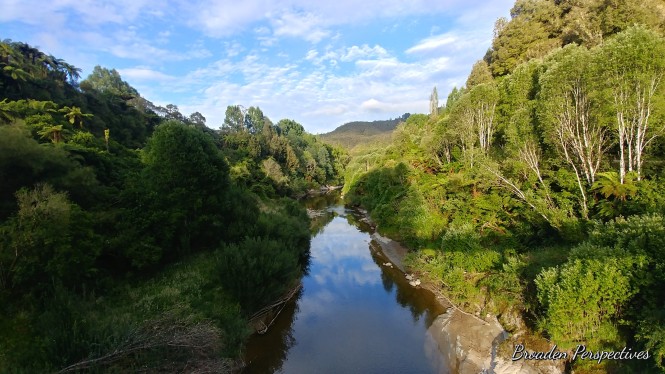 View of the river (Retaruke River) from the bridge on Oio Road in Whakahoro/Retaruke, New Zealand.

Before too long, I heard music which was quiet from where I was but I could tell it was blaring wherever it was coming from and so I had to go figure out what was happening. It was coming from the direction of the sheep cacophony so I just followed the road in that general direction. I came across the herding area and the barn where the shearing takes place. The music really was blaring and there were a lot of sheet bleating. One of the main guys on the farm who was constantly zipping back and forth from the Cafe to the sheering barn on a 4-wheel off-road ranger (sort of like Leemann’s – only my family will understand this but it’s ok) invited me into the barn to watch the sheering. I have never seen such a sheering operation in my life.

They hire a sheep shearing contractor; there were five guys in a row, steel extendable and movable arms from the wall holding the shearer, and then three ladies with a tool to move the sheered wool from the sheep and sheerer to the two guys packing the wool into 500kg bales. The speed at which these people work is incredible. I took a video to show it. The first guy in the line of shearers sheered one sheep in one minute. The music that was playing while I was taking the video may have some swearing in it…wasn’t paying attention to it very much while watching the whole thing and only noticed it later when re-watching my video.

I stayed and watched them for probably 30 minutes; I really don’t know how long it was there. But it was really cool. When I left, I went to walk back and I heard the ranger start up and I thought “I really want to walk back but watch the farmer guy stop and offer a ride back” and sure enough… “Want a ride back? I’m heading to the cafe.” Sure why not! So I hopped in the front with the farmer, the working dogs and an old dead sheep in the back. Pure New Zealand experience right here folks! 😀 The people are so friendly and genuine and their accent is lovely. :-p

After my walk, I had breakfast and then spent time sitting at the cafe (quieter there than at the lodge where we were staying as people were waking up by then) working on my blog. At 1:30pm, I had to be ready and waiting at the horse barn. I was going horseback riding in the hills around Blue Duck Station. I rode Bronc, a pretty big horse. I was pretty intimidated by him at first. He wasn’t very cooperative when I first got on him and started riding which didn’t help.

The ride was nice when we started, but when we turned around and acted like we were going back already, I though “No this can’t be it; if we go back now I’m going to be so mad that I spent all that money for this!” Well thankfully, the ride when on for a little while longer and we went up to the top of one of the hills to a beautiful vista and hung out there for about 15 minutes. That made it worth it. I don’t regret doing that activity now. 🙂 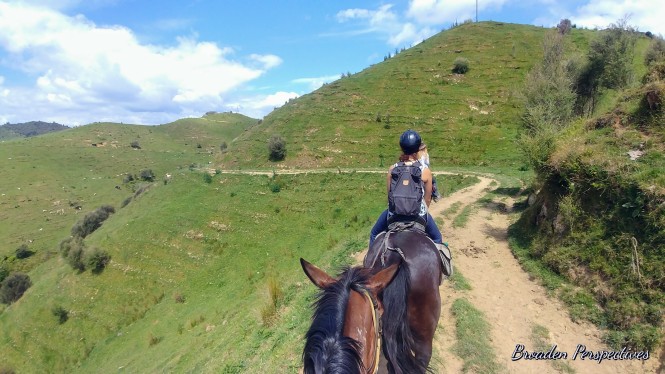 That’s Nidya (or Nydia, not sure how to spell her name) in front of me.  I’m getting ahead of myself but I talked to her and we might go trekking in Nepal together if everything lines up time-wise… but I forgot to get her contact number!!! 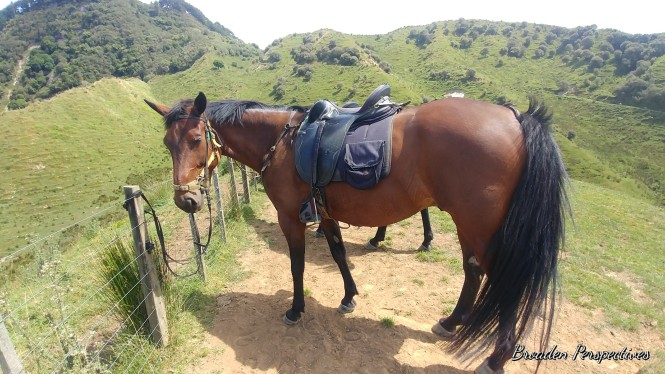 My ride for the afternoon… meet Bronc.

Such a great time.

The view from the top.

While we were chilling out at the top of the hill, I got to pet Bronc so he could see me and get more acquainted and comfortable with him as I wasn’t able to before getting on him to ride at the start. And it worked for me anyway because I was so much more comfortable on him going down the hill and back to the farm and I swear he was more comfortable with me as well… weird as it sounds.

Back the lodge, I made a quick dinner and then had to pack most of my stuff into my big pack and prepare my day pack for the Tongariro Alpine Crossing day hike that would be tomorrow. Not much else to report for location. Went to bed early as we had to be up and ready to get on the bus at 6:15am for the 1hr+ drive back to Tongariro National Park.