Stray Travel has a webpage that customers have access to once you’ve paid for the certain pass that you’ve purchased to travel. It’s called the “Tour Manager” and basically provides a list of all the stops. Those stops can be clicked on and will show the pick-up location options and dates that buses leave. So you can choose how long you want to stay somewhere and then just catch the bus that fits your schedule the best and is available.

A screenshot from my Tour Manager page. Black squares around the dates mean that those segments have been traveled and are now passed (clearly).

I didn’t realize that the vast majority of people don’t stay two nights at Lake Anewhenua; I had set my bus schedule so that I did have two nights. But thankfully the bus wasn’t full and there weren’t any new people hopping back on the bus so I was able to “stay” on the bus into Taupo. That meant I had an extra day in Taupo that wasn’t planned, but that was ok… because nothing had been planned there except for now being there from the 12th to the 15th. I didn’t even think of making a reservation at a hostel because the Stray drivers usually do that at the overnight stops; Taupo wasn’t an overnight stop– SURPRISE! I thought it was. No big deal. Another girl was hopping of the bus there and so I wasn’t going to be completely alone. The bus was going to drop us off right by one of the main hostels that hosts Stray passengers so we just went there. Since it was during the week (I think that was probably the reason), we had no issues getting a dorm room. They had space for us thankfully. And we were able to check in immediately (about 12:00pm) thankfully. Usually hostels are pretty strict about only checking at 2pm or after. So we could relax, shower, make whatever arrangements we needed to on the Wi-Fi, and then go out and about.

But I’m a little bit ahead of myself. On the way from Lake Anewhenua to Taupo, there is a little stream called Kerosene Creek. It’s in the middle of nowhere and I don’t remember seeing any specific “tourist attraction” signs for it so I don’t think it’s very well-known. It’s a thermal stream and is basically the temperature of a perfectly heated hot tub. The water was beautifully warm but not very pleasant to look at or smell. It smelled the typical smell of sulfur and had a lot of sediment suspended in the water which got filtered through my bathing suit. But it was a nice stop and I’m glad I got in!

Guess what type of power generation that is! I’m guessing your initial guess is wrong. I was wrong too!  It’s the cooling tower for a geothermal power generation plant – it’s not nuclear.  NZ is a nuclear-free country.

This is Kerosene Creek.  You can’t really see it from this picture but there was steam coming off of the water.

Anyway, coming into Taupo we stopped at Huka Falls located off of the Thermal Explorer Highway. The water from the river, which is quite broad/wide upstream, flows into a chute-like channel and is very turbulent. The water in the river/channel is quite green and amazingly picturesque.

So pretty!!  The falls I mean.. I don’t look so great in this photo.

Upon arrival at the hostel, I was in a bit of a funk thinking about how much money I was spending, about having my bus schedule and stopping locations a bit mixed up, and was just a bit overwhelmed about what I should do. So I just spent some time reviewing my bus schedule, deciding if I wanted to stay a few extra days or stick with the majority of the Stray passengers I knew by that time and catch the bus the next day (the 13th). I talked to the receptionist at the hostel and asked about the hiking around the area. She told me about two really nice walks and so I thought one walk a day would give me things to do and see while also providing down time in the afternoon (if I walked in the morning). So I went and paid for two more nights as initially I only reserved one night. I also had a nice video-chat with my mom for about half an hour; that definitely helped get my head back on straight and out of my “funk.”

It was good that I did stay longer because when I stay too long around the same people, I become comfortable and complacent in their company and forget that I don’t have to do what everyone else is doing.

Once I was settled at the hostel, I went out for a walk because it was a beautiful day!  Oh, Oh; if you want a peaceful and quiet hostel: DO NOT STAY AT BASE HOSTEL TAUPO!  It is probably the loudest hostel at night that I’ve ever been to!

Lake Taupo Panorama from the wastewater treatment plant.  If you’re a geek, an engineer, or just look closely, you can see a pipeline from the treatment plant to into the lake.

#LoveTaupo!!  I do love Taupo.  It’s a beautiful good-sized yet small town.

For those engineers in my life, they have a nice viewing deck above the lake-side water treatment plant with some important facts about the lake.   I was geeking out reading them; catchment area, lake surface area, depth, etc.  So I had to take a short video to capture them all and have to share them with you!

Mom – I washed, dried, and put away my dishes.

Unfortunately there isn’t an app for washing dishes.

I had planned to do one of the hikes that the lady at reception had told me about. It was going to be about a 4-5hour round trip hike. I prepared my backpack with some granola bars, camel-back with water, etc., and headed out. To get to the trailhead, I had to walk probably 4-5km; however, probably half the way there, on a main road, the sidewalk ended and left only a pretty wide shoulder on the road. Now, I could have most likely gone all the way to the trailhead on the road shoulder, but I became very unsure of myself. I don’t know the laws of NZ for walking on really busy main roads without sidewalks. I tried to convince myself that it would be fine, that I wouldn’t end up arrested or ticketed for walking on a main road, but I just didn’t have enough resolve in me to hike that trail and so I turned around. I had passed the street that led to the Waipahihi Botanical Gardens and so decided to turn around and go there for a walk. 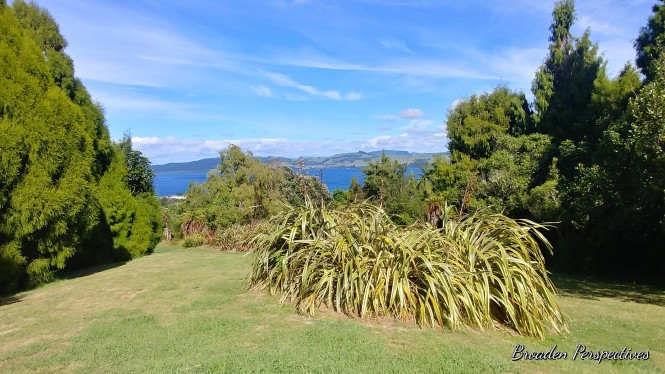 The best view I had from the Botanical Gardens.

I had been toying with the idea of where I would potentially like to find some work. The concept of working for one of the many skydive places came into my mind. Initially it sounded like an awesome idea! So, after the botanical gardens I decided that I would walk to Skydive Taupo another place right next to it and ask if they needed seasonal help. Around this time, my feet started to really hurt. I was walking in my running shoes and normally I don’t have any issues with them. So, I was probably 2/3rds of the way to the Taupo airport road when the thought came into my mind that skydiving only happens on the nicest-weather days. That forced the question of whether I want to be at work on all the nicest days of the week and the answer was a resounding NO! At that point, my feet and hips were really starting to hurt and I had at least 6km to walk back. So I immediately turned around and began walking back.

I was back into town when I saw one of the guys I had met on the Stray bus… a French guy. I hadn’t seen him for a while and he was eating lunch at a picnic table next to the beautiful lake so I stopped by to chat for a bit. Romain is a personal trainer who is also traveling solo for a while.

I took a nap that afternoon and didn’t do too much that evening. Met a guy from the Netherlands (George) in my hostel. Oh, don’t know if I mentioned this earlier, but I met another guy in the hostel (middle-aged) who was doing a really long walk and was in Taupo to first do the Tongariro Alpine Crossing and then fly home for the holidays. But he was walking along the coast (not sure which one – I’m too far behind on my blogging) from one end of NZ to the other. When I met him, he said he had walked about 1000km so far. He plans to fly back to Taupo after the holidays to continue his walk (pretty sure he’s going south to north).

Can I just say – there are so many people who do big and amazing things here! I want to be one of those people but where to start!?! And how to prepare properly?!? Those questions always stump me and feel like a mountain that I’ll never be able to get past. 😦

Today I was planning to take another long walk up out of town to find some thermal springs or streams. I did bring my swimsuit in case I had the urge to get into the warm water.

There is a really nice mixed-use (bike/pedestrian) path right along the river from Lake Taupo up to Huka Falls and beyond. It was really a lovely walk! I’ll let pictures do the talking. Along the way, there is a place to go bungy jumping off of the cliff at the river edge and so I stopped and watched a few people jump and a few people do the swing. Looked like a lot of fun! 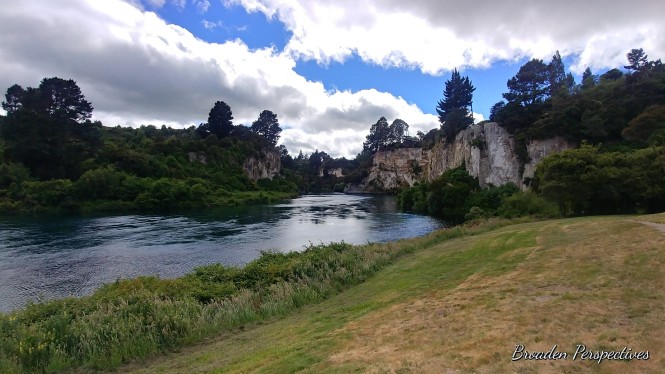 My walk along the river.  Up on the righthand side of the river was the bungy jumping place… can’t really see it because of the lighting.

Some adorable baby ducks swam by as I was watching some bungy jumpers.

I did cross the hot stream and there were quite a few people bathing there, but I had no desire to get myself and my bathing suit wet and stinky and so I decided to continue walking. I wasn’t nearly ready to head back and so I thought that since we had spent only a few minutes at the falls on our way into town that I would like to see it again and so I continued walking.

The hot stream.  Steam was coming off of this water as well. 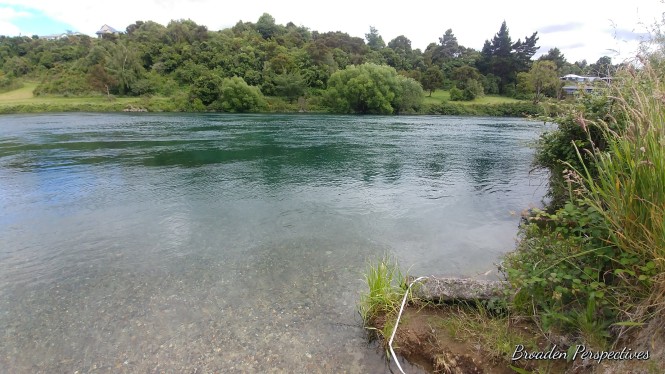 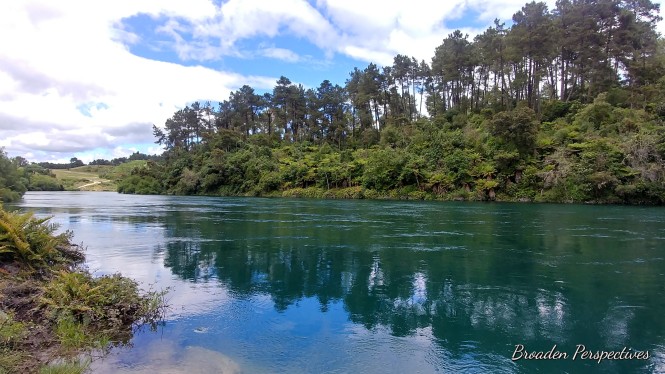 Again… such a beautiful walk.

Shortly after I left Huka Falls to go back to town, I bumped into the guy from the hostel who had walked the 1,000km so far and so we briefly talked for a minute before we both continued our walks. Later in my walk back, I bumped into the other guy George from the Netherlands. We got talking and chatted for a bit longer. He ended up inviting me to join him to see the new Star Wars movie that just came out. If he didn’t invite me, I wouldn’t have even known that it had come out! Completely unexpected trip to a small old cinema in the heart of Taupo. It was a really nice end to a nice day!

My feet start hurting at about 12km and so I had to sit and rest my feet for a bit. I really like my hat… it says “Wild Kiwi” on it. 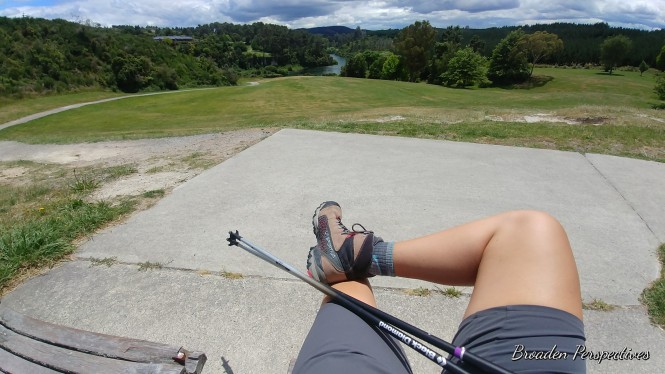 The view from my rest stop.