While I was in Paihia doing the Hole in the Rock Cruise, I met that couple from the UK and the lady told me I should take the water taxi in the morning and then walk back to the campground. I had planned on doing that until I saw an option called “Walk, Sail, and Seals.” I wanted to walk the coast, I wanted to sail and see the coast from the water, and of course I wanted to see some seals if possible! So, that option was reasonably priced and include all three things! So, I had to be ready to be picked up by the shuttle at 8:30am.

The shuttle took us to the small town called Kaiteriteri; probably one of the most picturesque little coast towns. The beach there was really beautiful; the area just had a really nice ambiance. We checked in with the Abel Tasman Sailing Adventures and then had to wait about 40 minutes until the boat was going to leave. So I just wandered around a little bit and then just sat at the beach taking in the beautifulness. We got on the catamaran at 10am and then sailed off towards the Abel Tasman coastline. We sailed by Split Apple Rock, a couple of islands, saw some seals, and then landed at Anchorage bay at approximately 12:30pm. It wasn’t very warm out on the water. I had my swimsuit on but ended up putting my pants back on because I had goosebumps. 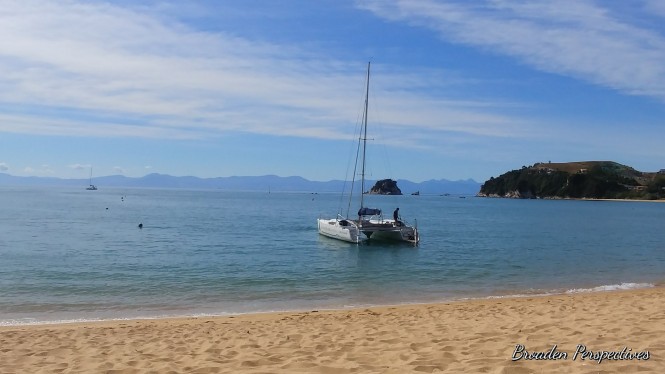 My ride for the morning…. first time on a catamaran.  Pretty cool boat. 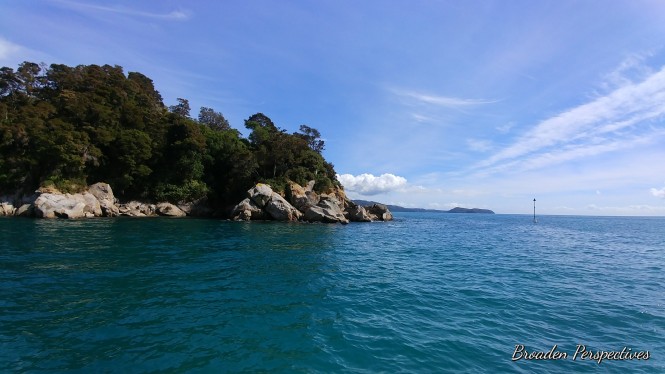 The view was beautiful before we even left the little bay/beach of Kaiteriteri.

Do you see why it’s called Split Apple Rock?

Split Apple Rock from another angle.

I don’t know the actual or scientific reason on how this happened… but according to the captain of the catamaran, the gods of the ocean and sea had a battle, and the clashing of their weapons on the rock split it down the middle. 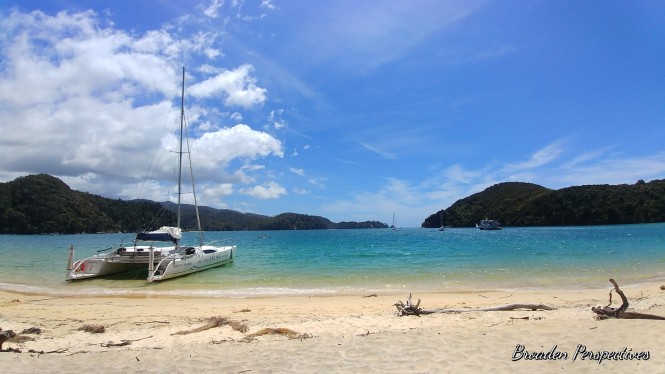 Not a bad place to be dropped off and abandoned. 😀  Hahaha, We weren’t abandoned.

We hopped off the catamaran at 12:30 at Anchorage Bay, approximately 11km from Marahau. I was going to walk back with a girl from the Netherlands that is also traveling with Stray. As we sat on a log on the beach tying our hiking boots on, a girl came up and sat next to us and was began tying on her hiking boots as well… and we started chatting. We ended up walking all the way back to The Barn together as she was camping there as well.

The view from the coastal track was beautiful; I took so many pictures but too many to upload here.  WordPress wouldn’t like me if I uploaded too many.

Kali is from Colorado and was taking some time off to travel as well. We just clicked and had a lot to talk about; it made the walk go pretty fast. We stopped at one of the few beaches on the path back, got our swimsuits on, laid in the sun for a little while, went swimming in the crystal-blue water which was VERY refreshing. We met a couple of guys that were also from the US (can’t remember specifically which state – I think CA) but I overheard them saying to each other “Do we have to go home?”

We chilled out and swam here at this beach.  It was pretty incredible.

A beach with small pebbles/rocks instead of sand; they’re sort of nice…They aren’t quite as invasive into your personal space as sand.  :-p

After a little time drying off, we put our clothes back on and continued the walk back to camp. Kali and I met up for dinner after we had rested our legs and showered to get the saltwater off. We didn’t feel like walking too far so we just went to the Park Cafe. We were both famished and had a hard time deciding what to get. I settled on the pizza and it did not disappoint; maybe because I was so hungry.

Dinner…. tastes so much better when you’re famished!

I keep playing with the idea of doing one of the Great Walks. A Great Walk is a 2 to 5 day, well-marked, maintained hike with shelters that you can book to stay for the nights you are hiking. I really want to do one but have to overcome some feelings of not being up to the challenge. I also need to downsize/unload some unused gear from my big pack before I try hiking. Now I just need to decide which Great Walk to attempt and when. That’s the question. I’m thinking to try the Routeburn Trail (from Queenstown to Milford Sound – ˜30km) and the Abel Tasman Coastal Track. But we’ll see. If you want to, you can see more information from these Great Walks at http://www.doc.govt.nz/parks-and-recreation/things-to-do/walking-and-tramping/great-walks/. My resolve is not strong to do one of these but I think I will be mad with myself I don’t do one.

My big mental barrier is “I’ve never done this before.” The first time is always the hardest; I know I will learn a lot with the first one and will most likely overcome that feeling of being incapable or unprepared. 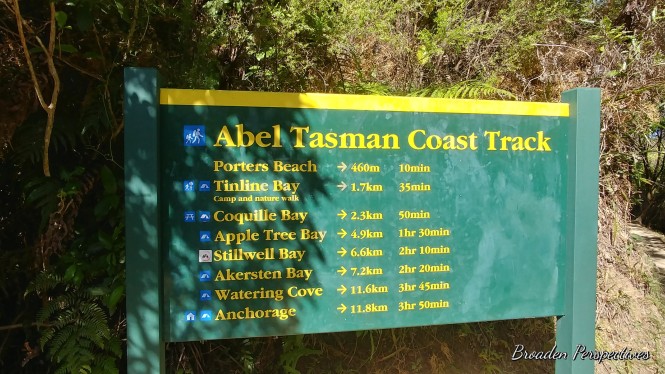