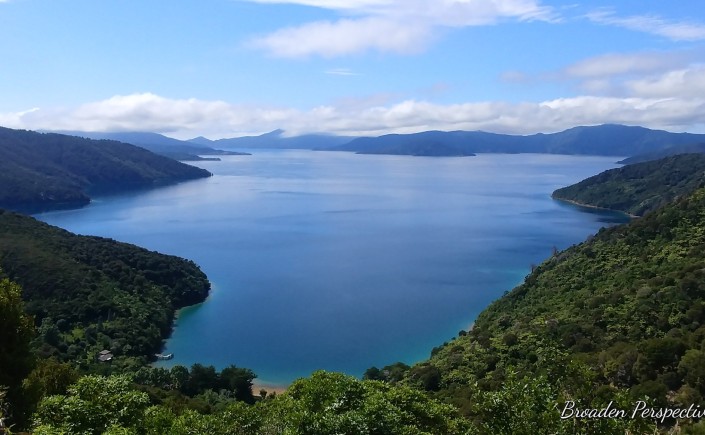 Leaving Kaikoura, similar with coming into Kaikoura, you could see the landslide scars caused by the earthquakes and all the work being done to reconstruct and/or repair the roadway leading into and out of the town.

I think they were drilling into the slope to install slope-retaining measures.

Not sure why this video isn’t properly oriented; my videos don’t usually have issues uploading in the proper orientation.

You can see the landslip there.

On the way, our bus had to stop in Blenheim to pick up some new passengers. While we were there, the driver dropped us off at the pickup point and said she would be right back. Well, a couple of us (including myself) started wondering; it was taking longer than she said. All the sudden, the Stray bus pulls up, led by another commercial bus. The driver in the Stray bus wasn’t our driver, but a guy who looked like a bus mechanic. What? What happened to our bus driver?!

She hopped off of the commercial bus and told everyone that our luggage had already been transferred. We just had to grab our personal stuff from the inside of the bus. We took a normal commercial bus from Blenheim to Picton because the Stray bus needed some repair; I didn’t catch exactly what was wrong. I think something with the “windscreen” which I’m assuming is the windshield. I didn’t see anything wrong with it, but I’m not a bus driver or a mechanic.

I didn’t do much the rest of the evening. Perhaps worked on my blog or took a nap.

Had to be up early to catch my 8:00am water taxi. I had made some PB&J sandwiches the previous evening and had everything I wanted to bring with me on the hike all together and ready to go.

Left the hostel and walked to the waterfront to find the water taxi place. The weather was supposed to be nice but it was a pretty overcast morning. I had paid $3NZD extra and caught the earlier boat so that I could stop for an hour at a bird sanctuary island on the way to the start of the Queen Charlotte track. I don’t know why I let the iSite lady talk me into spending that extra few dollars. I didn’t end up stopping at the island because it was cloudy and chilly and I didn’t want to have to walk for an hour just to keep warm when I would have to walk 14 kilometers on the trail in 6 hours to reach the pickup point. Granted it’s plenty of time to hike that distance, but I was feeling in need of not rushing along. So, I just talked to the water taxi driver and said I would not be getting of fat the bird sanctuary and just go straight to the trail.

On the way to the track.  I love symmetry.

Views from the dock at the start of the Queen Charlotte Track. 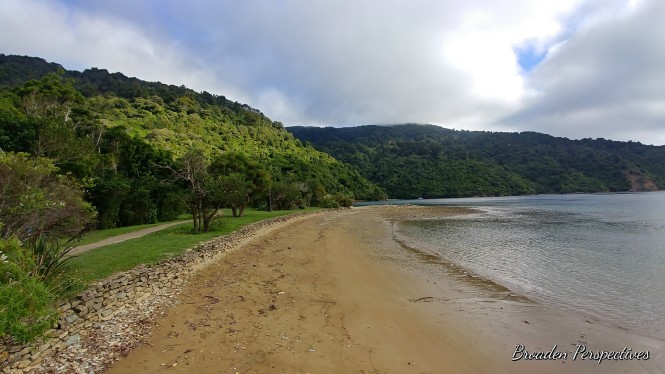 The view in the other direction.

I’m glad I did this. I was walking so slowly; I never walk that slow. For me it was more of a saunter down the trail then a hike. I was feeling quite worn out, really lonely since it was my first solo hike since my friend went home, tired, and growing more and more aggravated as I continued walking and, what I think were cicadas, millions of them, were growing louder and louder until I felt like they were screaming in my ears! I was really hoping for a peaceful and quite walk; it was anything but that for most of the way. They seemed to grow louder and louder the further I went. I ended up putting my headphones in and listening to podcasts in an effort to distract myself from the screaming bugs.

I was heading to Endeavour Inlet.

Being in that worn out state,and just generally, I was not terribly impressed by the Queen Charlotte track. It wasn’t quite as well-kept as the other trails that we/I have hiked up to now. It was heavily forested most of the way with only occasional openings in the trees for decent views of the Sound.

Again, I apologize for the wrong orientation.  Not sure what’s going wrong.  These videos are mostly for the noise so you can get an idea of how loud the bugs were.

This and the following views were the best three out of probably 4-5 viewpoints in the 15 kilometers that I walked. 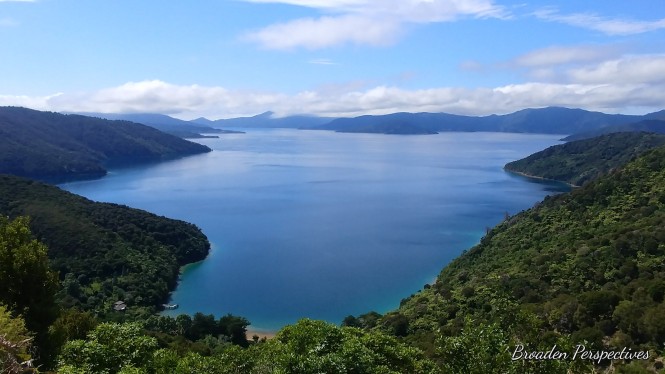 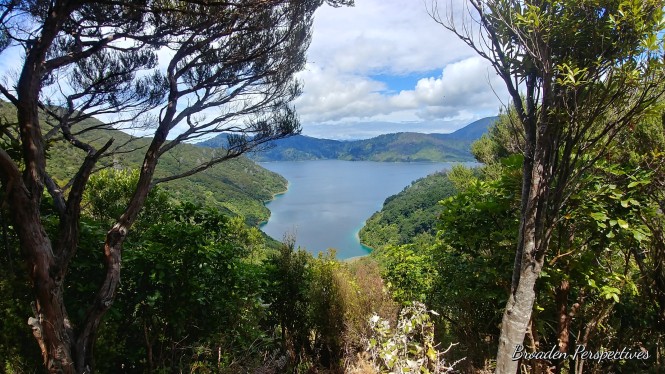 It was nice when the sun came out. I reached the pickup point, Furneaux Lodge in Endeavour Inlet, 2 hours early. Fine with me. I initially sat at one of the cafe tables until one of the bean bags became available and then sat in one of those. Just as I went to sit in one, another young guy sat down in the one beside it/me. I wasn’t quite sure if I should get up and leave so that the others in his family could sit. But he didn’t make any issues out of my sitting and there and he ended up offering me the rest of his Bundaberg (what remained in the bottle from what he poured into his cup). I think his family was English or maybe Australian. Not exactly sure. Anyway, really nice people.

Chilling out with my journal waiting for the 4:30pm ferry.

While waiting on the dock for the water taxi, I talked with a young guy that was working at the lodge for the summer. He was from England. I was telling him about my plan to go to Nepal and he said yes, you should definitely go there. I’ve gotten advice from three or four people now regarding Nepal and how trekking on the popular trekking routes is doable on your own. He said that the teahouse accommodations all have the same set price, that there is wi-fi almost everywhere, and is definitely doable without a guide. I really enjoy talking to people and getting their input and experience for places I will be traveling. 🙂

The water taxi ride back was pretty long and I was getting really tired and cranky. I went back to the hostel, made dinner, and just chilled out.

I did almost nothing all day. I was so worn out and exhausted, I just needed to have a day to not do anything. I did want to get up and walk around town to make sure I had seen everything and also to keep an eye out for a beautiful scarf that I had seen in Kaikoura but had forgotten about while writing a blog post and was too late to go get before we had to leave. So, the previous day I had seen a shop with a bunch of scarves on a rack and thought I will look there! So, I went in and started scanning and looking through. I saw this one scarf and literally inhaled like I had been scared by something. I saw this gorgeous blue and cream scarf with accents of shiny gold embellishments on it. It was so beautiful. It was a bit more expensive than I had hoped, but I did the thing that you should never do if you really want to walk away from something; I tried it on. It was so beautiful and unique. I had to buy it. And I love it!

I walked a bit longer, ended up walking next to and chatting with a middle-aged couple from the outskirts of Wellington who told me about a HelpX girl they hosted who ended up getting a permanent job here and who now has her New Zealand citizenship. 😉 Very interesting.

Went back to the hostel and laid down. I either took a nap today or yesterday; can’t remember since I’m behind.

I had been booked by one of the Stray drivers for the 2pm ferry crossing back to Wellington. I didn’t do much in the morning. Got up, showered, packed my stuff, checked out of my room, and just hung in the common area and re-sewed some green stones and a shell George gave me onto my survival bracelet he made. 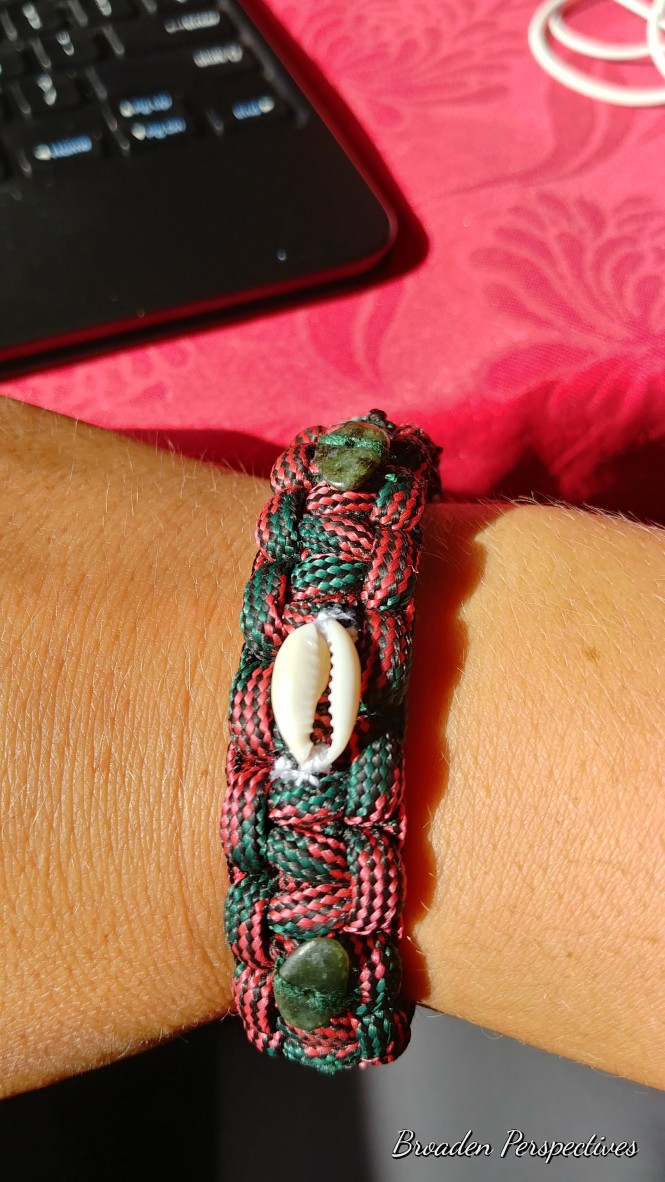 The ferry ride was beautiful. It was a sunny day but I had dressed a bit warm and brought a jacket as I knew it would be chilly out in the unprotected Cook Straight. It was chilly, not because of the wind, but because at 3pm, the sun is behind the ferry, and with me standing in the very front and center of the boat, I was in the shade the whole time. Brrrrrrr…. but it was so worth the views and the quiet with nobody up front with me.

It was such a beautiful day! 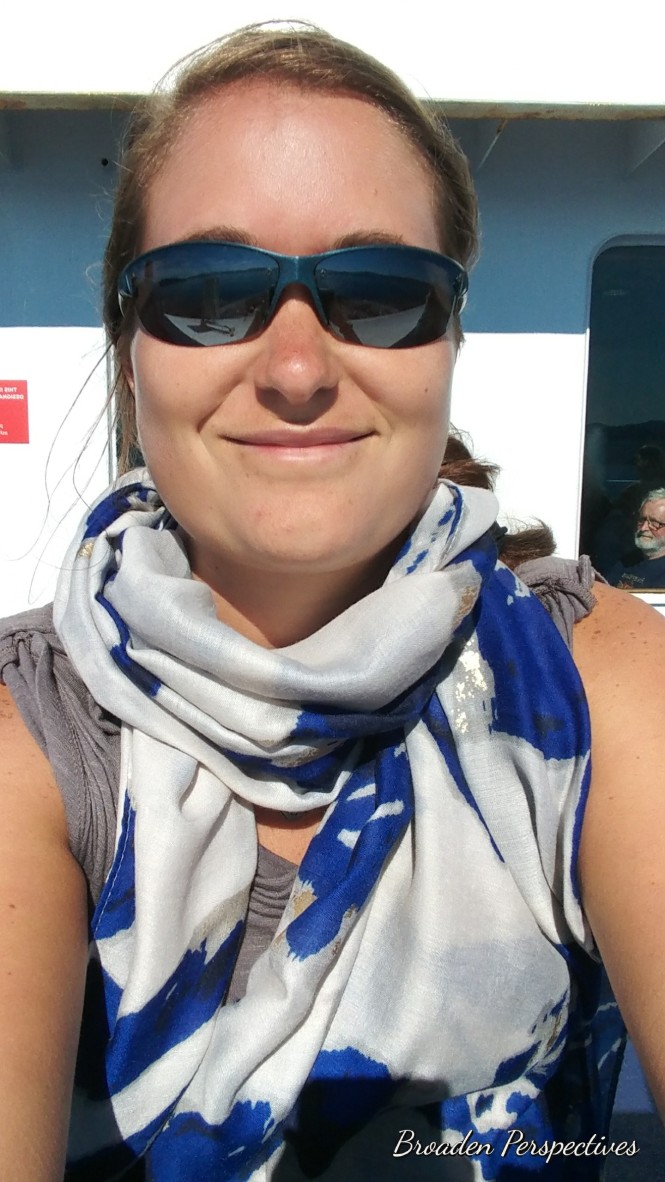 I couldn’t leave you hanging about my beautiful new scarf!  I love the color blue so much!

Hopped off the ferry and walked to the YHA; my accommodation in Wellington.  While walking to the YHA, there were a bunch of people (it was a Sunday) using some really nice usable public spaces in the city’s waterfront to have some fun.