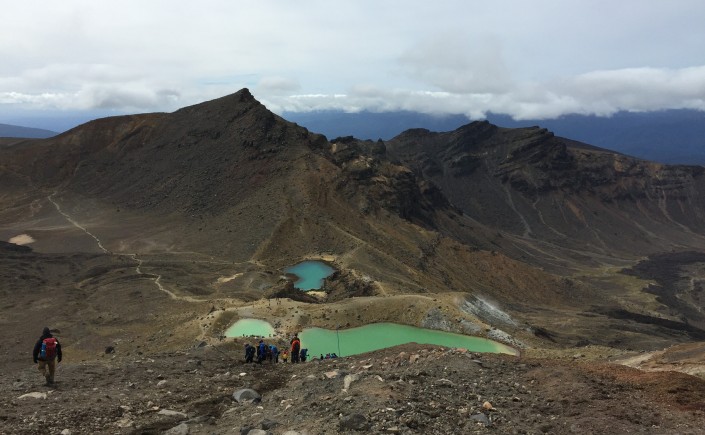 The crossing hike was pretty challenging with a heavy pack on. But we took our time up devils staircase and up to red crater. My legs were shot by the time we got down the other side. My feet were killing me when we finally reached the Oturere hut. The last few kms took forever. Walking through plains of rocks and sand was pretty beautiful. My feet really hut though so I didn’t enjoy it as much as I would have liked. If I was hiking alone I probably would have stopped to rest my feet and then continue.

Found a little “sheltered” campsite and set up…after about a 15mins rest for my feet. It was pretty windy and soon discovered the reality of the very fine sand or grit being blown into my tent somehow, regardless of the rain fly covering the whole thing.

It got cold as the evening progressed. So I put my sweater, hat, and raincoat on and walked to the nearby falls.  I’m glad I did. It was like enjoying a crisp fall day.  Dinner was delicious. Rice and baked beans cooked in my tramping cup.

I was a bit anxious about hiking the Tongariro Crossing portion of the track. I did it without any real issues back in December but that was with just my day pack on. Over a distance of 12 kilometers, we would be hiking from a 1200 meter elevation up to 1,800 meter elevation then back down to 1,360 meters at Oturere Hut. The first part of the trail, aptly named “Devil’s Staircase” is unusually punishing, especially with a monkey on your back. We (Daisy and I) took short breaks after a couple sets of stairs or every other trail marker post.

We made it to the top of the staircase and took a couple of minutes to eat a granola bar before crossing the plain of the “southern crater.” After this wide plain, there is another elevation gain to the highest point. Climbing up that, I felt a bit slower than Devils Staircase. The temperature had dropped and the wind had picked up significantly. My hands were freezing but inside I was sweating.

Crossing the broad plain of “southern crater.”  Feeling pretty beastly in front of Mount Doom after hiking up Devil’s Staircase with my big pack on.

Some people we passed commented on the size of my pack. Things to the effect of “Wow, that’s a big backpack for this hike.”  I kindly informed them that I’m doing the 3-night-4-day Tongariro Northern Circuit Great Walk and then they seem impressed and I can see that the size of my pack then makes sense to them.

It would have been neat to take a side-trip up to the summit of Mount Doom, but that is strongly discouraged by the tourist shuttles and DOC because (it’s mentioned in the brochure) it is culturally disrespectful to hike up that mountain.  So, DON’T DO IT!

View from the broad “Southern Crater” from up the hill towards Red Crater.

We finally reached the highest point but it wasn’t a place where you wanted to sit down and take a lunch break; you would be super chilled in just a minute or two. So, must keep moving. 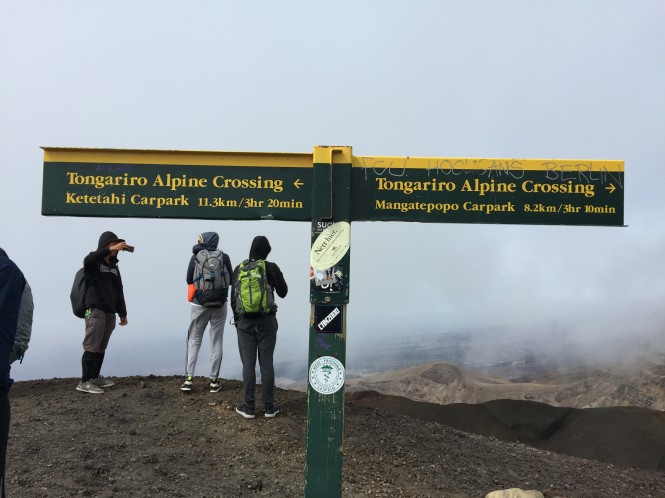 This sign is at the highest point of the trail.

Pano from near the highest point; looking at Blue Lake in the background to the left of where standing.

Down the other side towards Emerald Lakes, there is a lot of scree. I didn’t know it was called this last time… it’s basically talking about all the loose rock/gravel that builds up against the solid rock creating pretty dangerous conditions if you don’t know what you’re doing and/or are just careless. Basically, you have to be mindful of where you’re walking and take your time and before you know it you’re at the base of that steeply inclined part of the trail.

I just love this view.

Daisy and I took a break down near but below one of the Emerald Lakes where the wind wasn’t as strong and where the temperature wasn’t as cold. It was just far enough and up the hill enough that I had no desire to throw off my big pack (I had just put it back on after our break) and try to run back up to the upper lake in order to catch a Haka being performed. All the sudden, we heard the characteristic loud men’s chant-yelling. In the Tongariro brochure it says that it is culturally disrespectful to touch the water of these Emerald Lakes; that gave me the impression that it was then a culturally significant location for a Haka to be performed. I’m not sure if this is really true or not but I am still kicking myself for not throwing off my pack and trying to catch whatever I could have that Haka.

Anyway, the circuit track breaks off of the Crossing track right after passing the Emerald Lakes. The trail then descends down into a broad rocky plain that consists of an increasingly picturesque combination of rocks the size of massive boulders (that would have been lots of fun to scramble on) down to fine sand. As we got closer and closer to the hut, my feet hurt more and more. I wanted to stop to appreciate the uniqueness of the landscape but I knew that would delay reaching the final destination where we would be done hiking for the day, where I could make dinner, and pass out if I wanted to. I would have stopped if I was hiking alone. But with Daisy hiking behind me, I felt a little pushed to keep going.

Pano of the lower of the Emerald Pools looking up towards the peak of the trail.

The view after descending the majority of the way down from the Emerald Lakes.  Just a barren landscape of mostly rocks and sand of various grain sizes.

The most welcoming site after a long day’s hike. 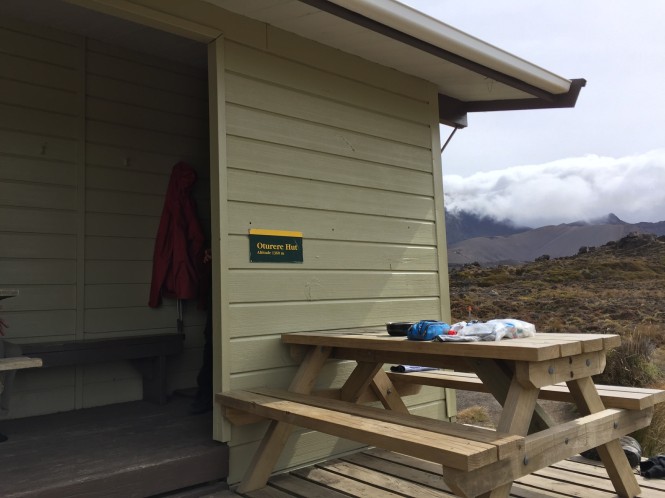 I had been dreaming about what I would have for dinner all the way up Devil’s Staircase and down the other side: baked beans (here that means pinto beans in a yummy tomato sauce) with some of Uncle Ben’s instant tomato-basil rice, cooked on the hut cook stoves, with a piece of bread and a 1-slice PB&J sandwich to top it off. I was super hungry.

I had to sit down for a little while before locating a camp site to set up in. My feet were killing me. My knees were a bit worn out as well from all the downhill pressures of the crossing. One of the campsites was in this little protected nook area where the ground level around the site was elevated on three sides. So I set up there.

Dinner time with my tramping cup..

Dinner done, it was still too early to just get in my tent and do nothing. I rested my feet for about an hour and a half by just laying in my tent. It was pretty windy and it didn’t take Daisy and I long to notice that very fine sand/grit was making its way into our tents, and just generally getting everywhere. It started getting chilly when the sun was going down, so I put on my sweater, rain jacket, and hat and went for a walk to the nearby waterfall and just around the area adjacent to the hut.

Broader view of the valley below the waterfall. 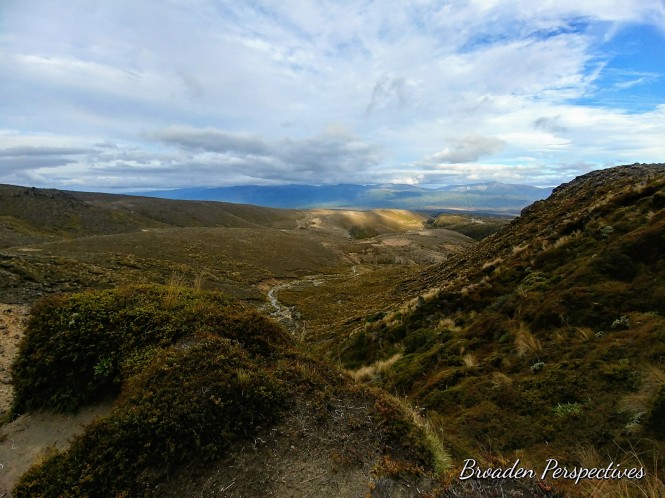 Another shot of the valley below the waterfall.

A view of the hut looking back towards where we had from that day.

I slept slightly better in the sense that I was warm enough all night. However, the wind would not be a constant velocity. It would audibly calm down for maybe half a minute or so making me think it had finally died down for the night only to rush back, shake my tent, wake me up, and have to fall back asleep. All this while trying to be conscious not to breath in too much of this fine sand/grit that was making its way into my tent. I tried to accomplish this by having most of my face covered with my sleeping bag only to end up uncovering my face because I felt I was breathing too much of my own CO2. Then, at some point during the night, it started to rain….and it didn’t stop.