Today is the day to visit Keukenhof. We thought of going yesterday but we didn’t yet have the car that Jorgo was borrowing from his mom. Once we had her car, we had a little bit more freedom to go out and about.

Keukenhof is about a 30-minute drive south of Amsterdam. It’s located in the “bulb region.” The day started off pretty overcast and even rained a little bit earlier in the morning. I thought perhaps I had made a mistake by going to Rotterdam the day before when the weather was so beautiful. But thankfully, the sun came out and it turned out to be a really nice day.

Besides Amsterdam, I didn’t see many other tourists in Netherlands. Granted it isn’t exactly summer yet and so there are less than usual, I’m sure. But, if you wonder where all the tourists go in the Netherlands: it’s Amsterdam and Keukenhof. 😀 So many tourist buses, tons of cars, and of course some bikes.

We bought our entry tickets and parking pass and then headed into the grounds. Because of the long winter, a majority of the tulips were not yet blooming. However, the crocuses were all blooming and cheerful. Since the Keukenhof is a place with many flowers, it’s better shown in pictures and not words. So take a look! 🙂

Entry to the Keukenhof

They had a little maze made out of evergreen shrubs that we walked through to a pretty short pavilion overlooking some tulip fields that weren’t yet growing, not to mention blooming.

There was a windmill on the grounds of the Keukenhof. It wasn’t spinning while we were there but it was still cool to see. It was also too busy to try to go up in; the lines and the crowds in this specific area of place was packed.

There was a guy tending two barrels with heavy cloth covering the tops and a couple of young ladies dressed in old-style Dutch attire behind the table preparing the fish.

Fish prepared for the smoking barrels.

Poor fishies!! Anyway, these little guys went into the barrels for smoking. You can see the barrels and woodchips for the smoke below. Oh, and the guy was wearing wooden shoes!

There were positively too many flowers and too many pictures to add them all into my blog. So I chose a bunch of my favorites and they are shown below. 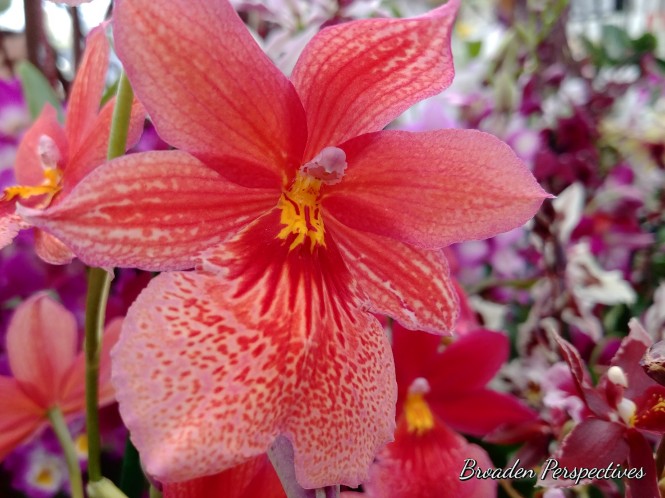 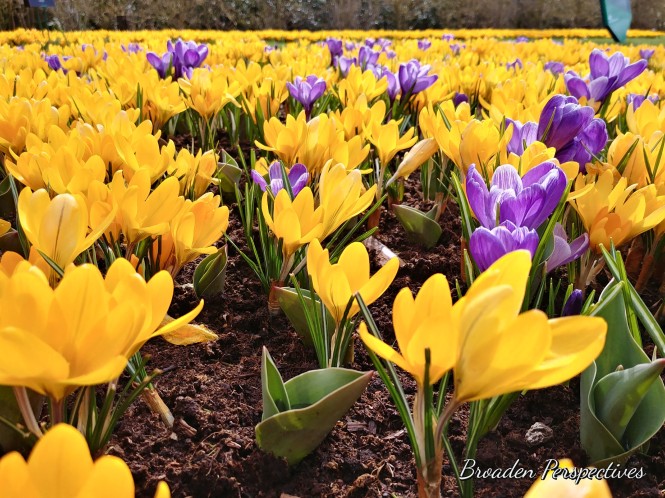 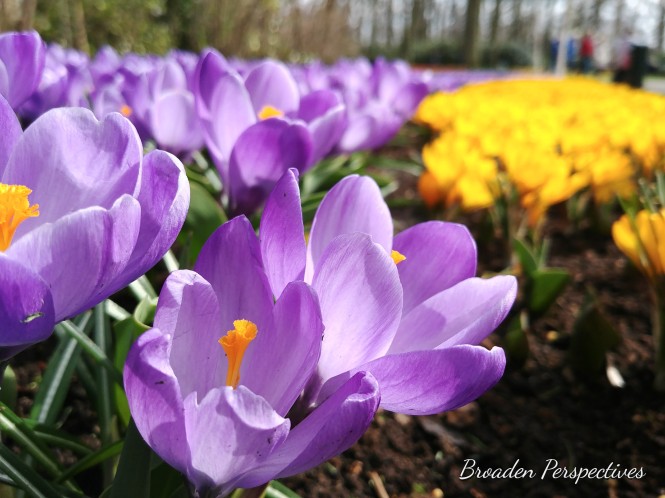 I love capturing moments of bees at work on flowers.

Trying to walk in the shoes of my Dutch heritage…. not working out too well. They’re a little big.

There were some outdoor tulips blooming… but not too many.

I love this photo of crocuses with the beautiful pond in the background. 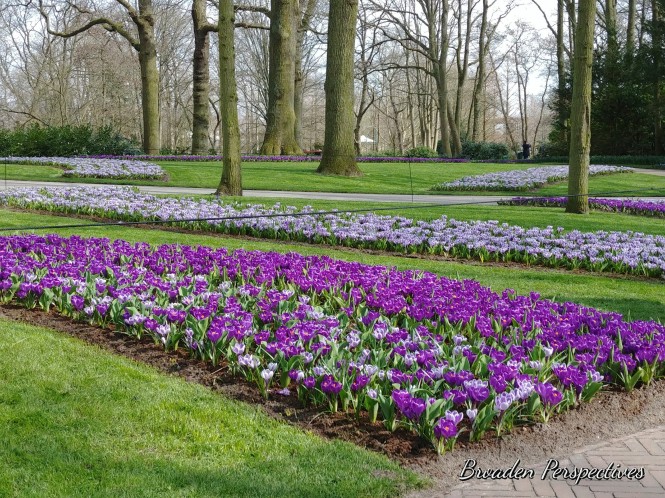 In one area of the grounds, they had a couple cafes, a water fountain, and an incredible music machine!! The biggest one I’ve ever seen. I freaking love this music machine!!! It makes me smile every time I listen to it.

Doesn’t this song (in the video below) make you happy? I really should have bought their CD.

We came to this small pond where I saw some ducks fishing together; they almost always coordinated when they would dunk their heads and stick their rear-ends in to the air. I thought it was totally cute and snapped a shot. 🙂

The grounds of this place were absolutely immaculate.

I was trying to capture this flower bed from above and it just wasn’t working for me…. then I decided to take a lower approach.  I love to call this the forest of flowers.  🙂

There was an enclosed greenhouse-type building where they did have several large rectangular spaces of tulips blooming. Wow, such an incredible profusion of colors!

I need to do some research on my Dutch heritage and see where the Vanderhoof side of me came from in Holland (i.e. Netherlands). In the meantime, it’s nice to see the land of my ancestors. 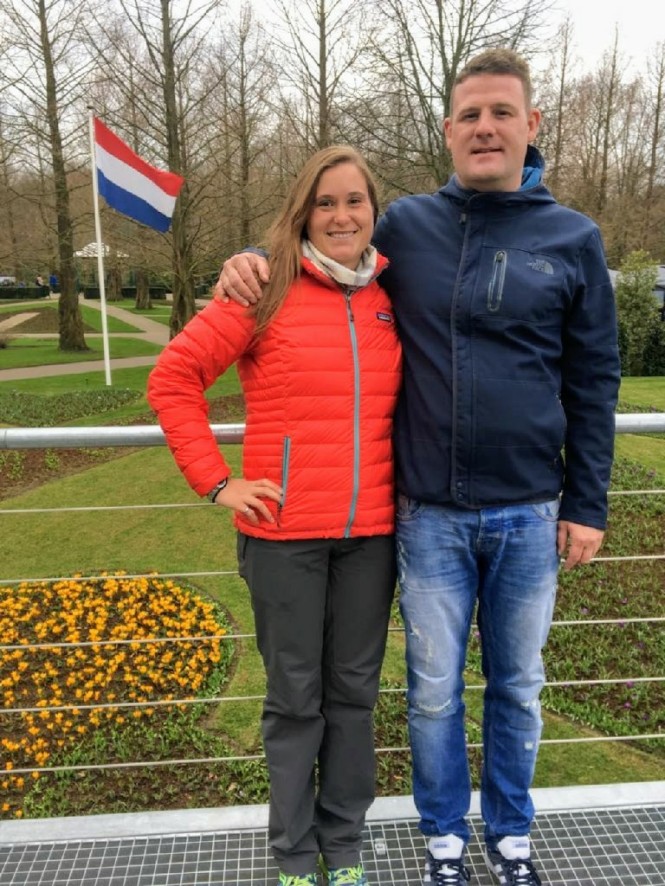 After the Keukenhof, there was still a good amount of daylight left and Jorgo said we were close to the beach. So we headed to the coast to go for a nice walk. The sand dunes are pretty big. And guess what runs along the beach in the sand dunes: a bike path!!! Goodness, it would be so awesome to do a bike tour of the Netherlands. 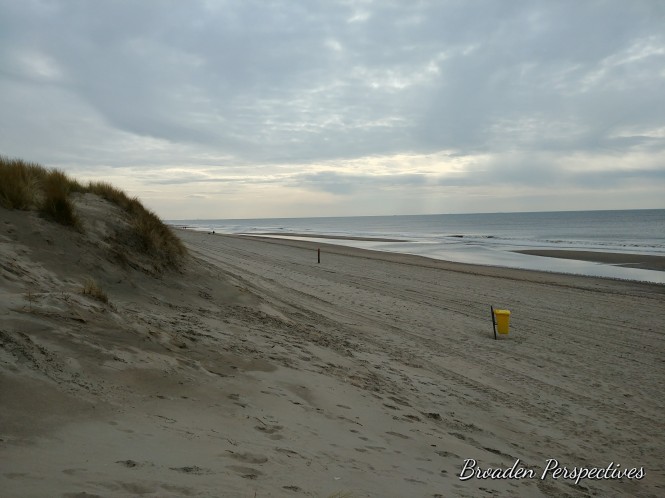 After the beach we headed back home.