Wow – I’ve gotten so far behind in writing! It’s hard to keep up when I’m traveling every few days and trying to get the most out of each place. I need to catch up though so I guess I will take advantage of a missed train connection here in Parma, Italy to write up a bit of my time in Munich, Germany.

My sister dropped me off at the station at about 2:10pm and so I had a few minutes to get to the appropriate platform to catch the regional train back to Koln (or Cologne) to catch the ICE (high speed) train. Boy did that train fly! The fastest speed I noticed on the little monitor on which they occasionally display the speed was 306km/hour. And that train rides the rails so smoothly, it’s incredible. It’s about a 6-hour journey by train.

I was planning to meet with my friend Patrick that I met at university that evening and then spend Saturday together at catching up. Haven’t seen Patrick in probably 3-4 years. I don’t remember exactly. Pretty sure I was still working in Syracuse which was between 2011 and 2013. Finally arrived in Munich and met Patrick. We talked and went and had a drink and just caught up on the last few years. 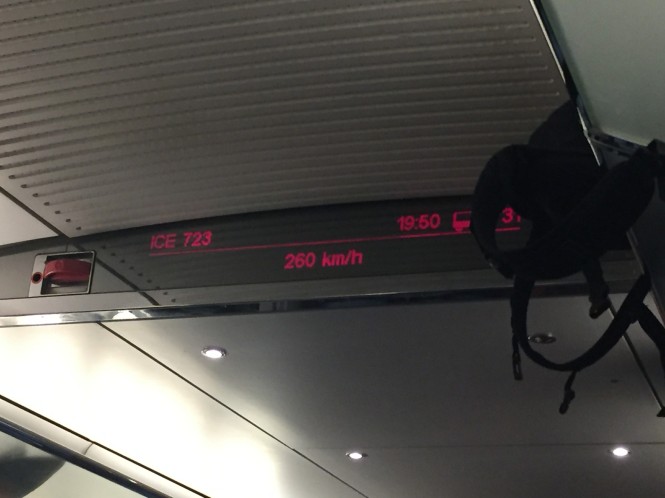 Below are just a few views from the train as the sun set on my way to Munich. 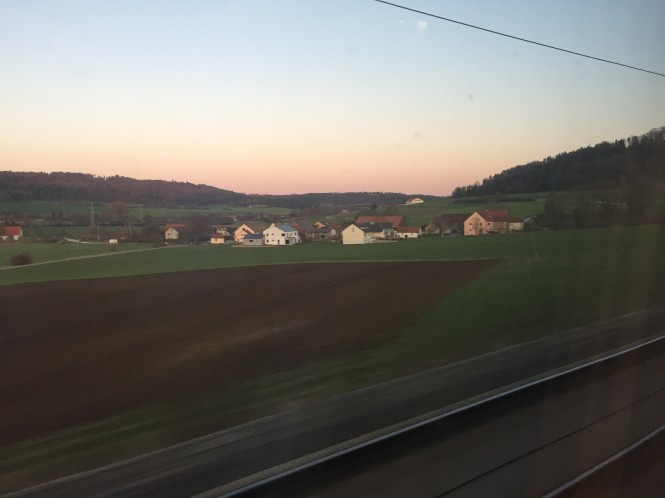 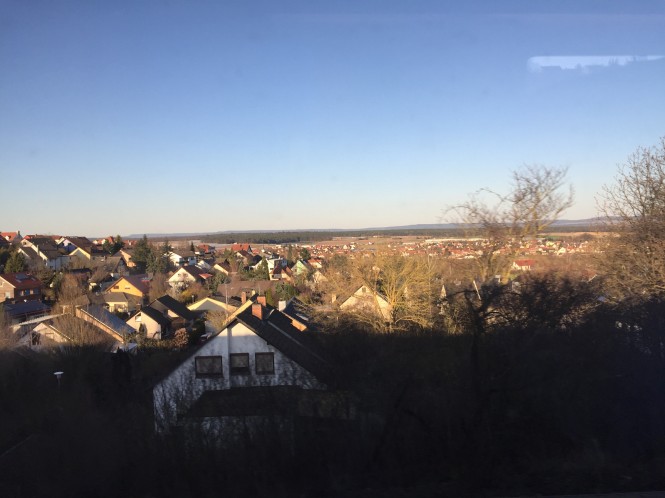 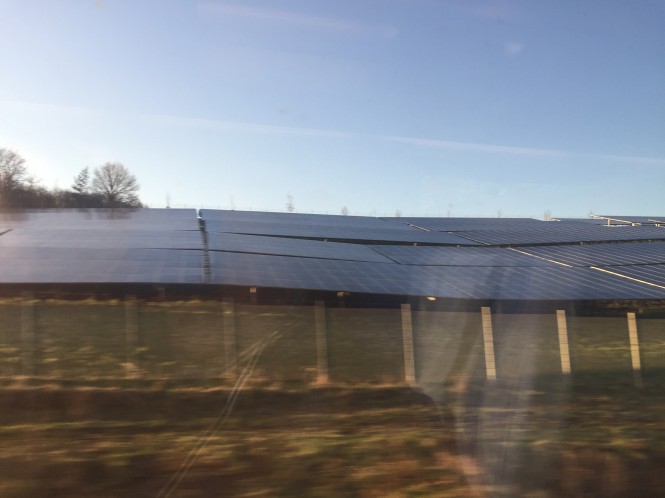 Saturday was such a beautiful day. After breakfast we just headed out to walk around the city. We came to the Temple Diana which was beautiful and just a little ways past that is the Bavaria state government house. In front of this big and beautiful building is a memorial to those military men and women that were killed in World Wars I and II. 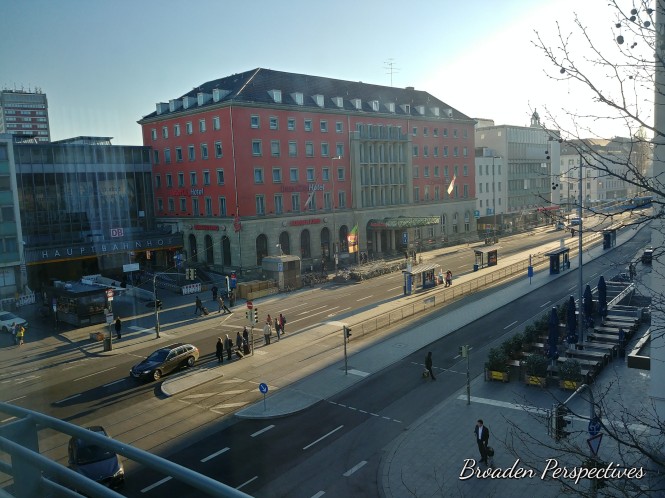 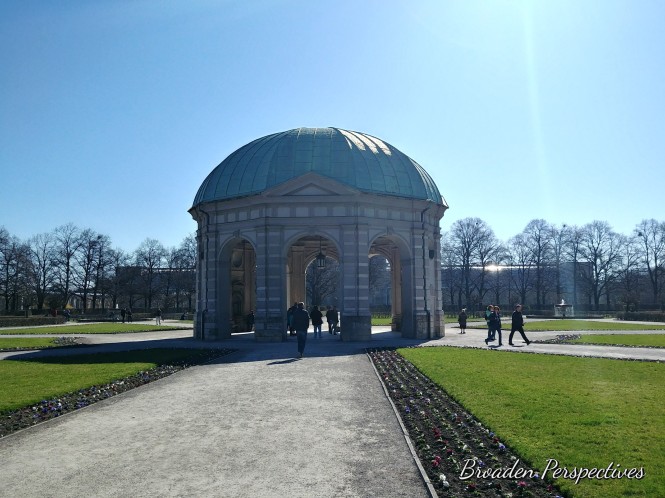 A 360-degree video panorama from inside the Dianatempel. 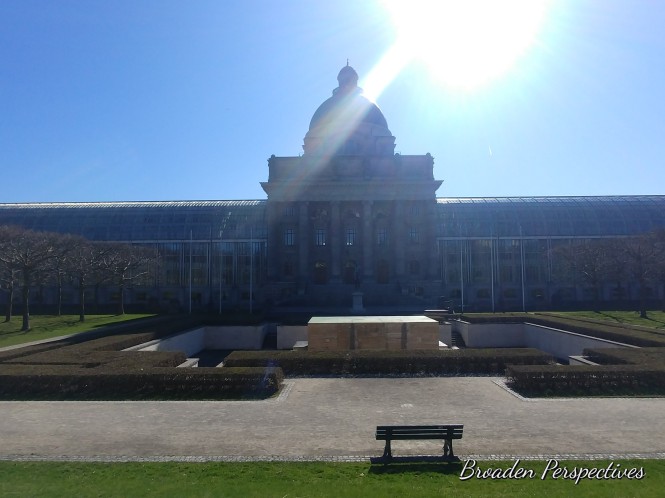 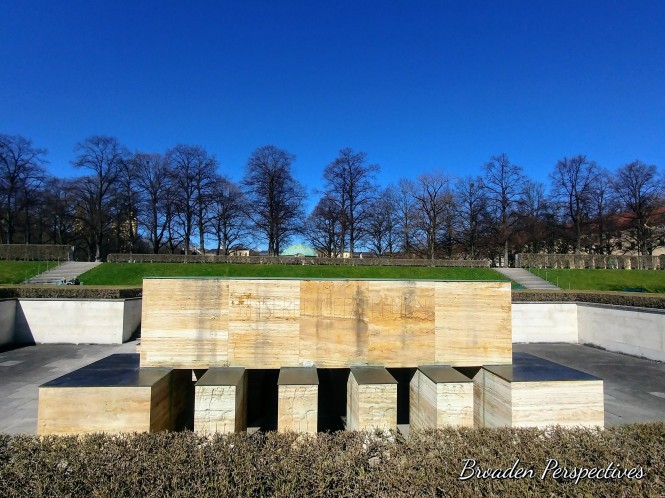 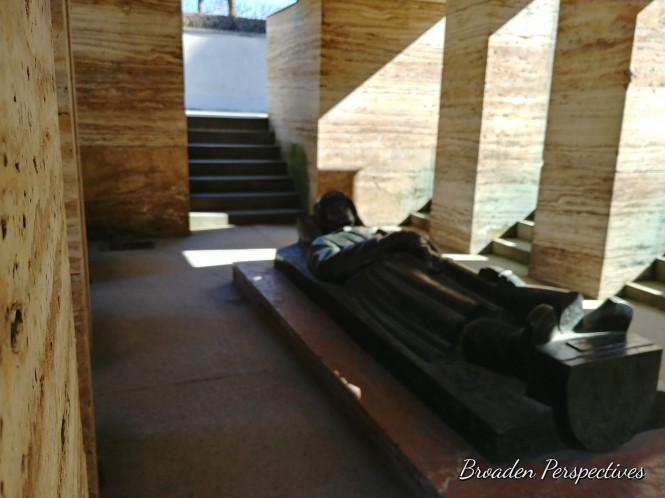 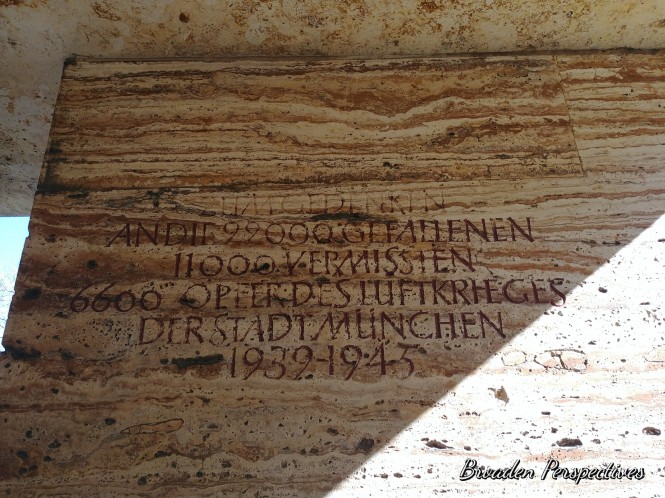 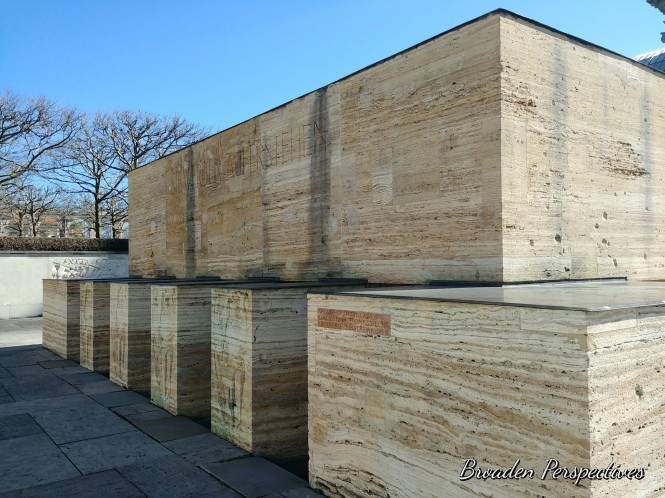 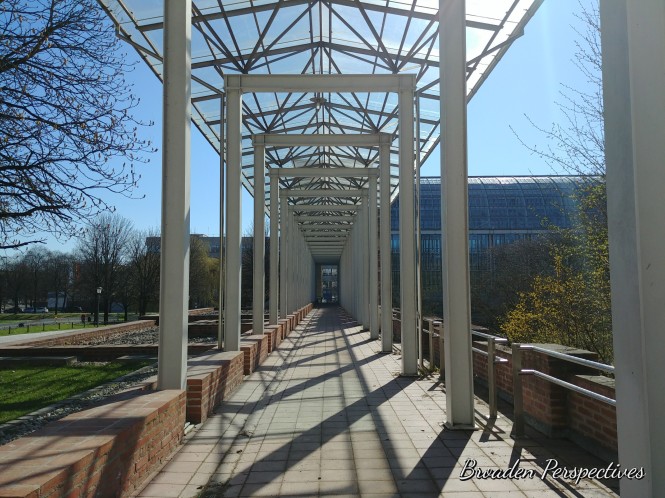 After that, we walked by a bit of an ominous concrete tower with a thick steel cage on the top with a fire burning inside. Since it was all in German and I couldn’t quite make out what it was for, I asked Patrick and apparently it was a memorial to all the Jewish people killed by the Nazis in WWII.

We finally came to the English Garden which is a huge park, sort of like Central Park in NYC. But this park is probably a little bigger….hard to say really. We came to this large stream flowing through the park and as I looked upstream, I thought my eyes were playing tricks on me. I said to Patrick “I think people are in the water way up there.” He told me about the surf wave here in Munich and asked if I wanted to go watch them for a little while. Heck yea! So we walked up the bank of the big stream (or small river really) and then I could clearly see it: a line of people in thick wetsuits standing in a line waiting for their turn on the surf wave. It’s super cool really! The way the water flows out from under the bridge and is introduced to some major tubulence-inducing on the river bed creates this constant wave large enough to practice surfing on. I took several pictures and a couple videos… take a look! 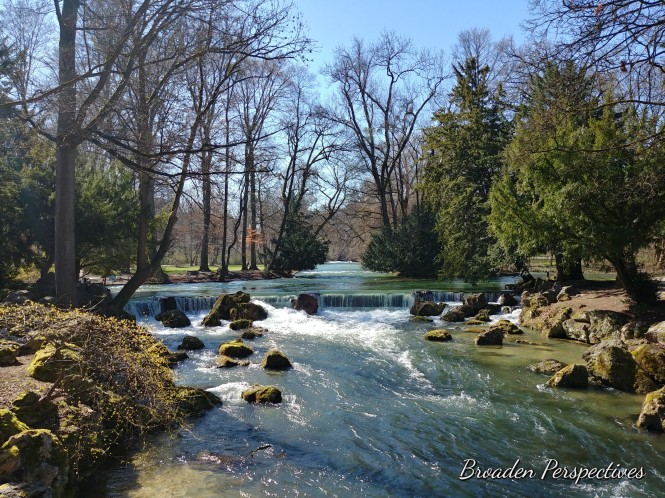 The big stream or small river running through the English Park in Munich. 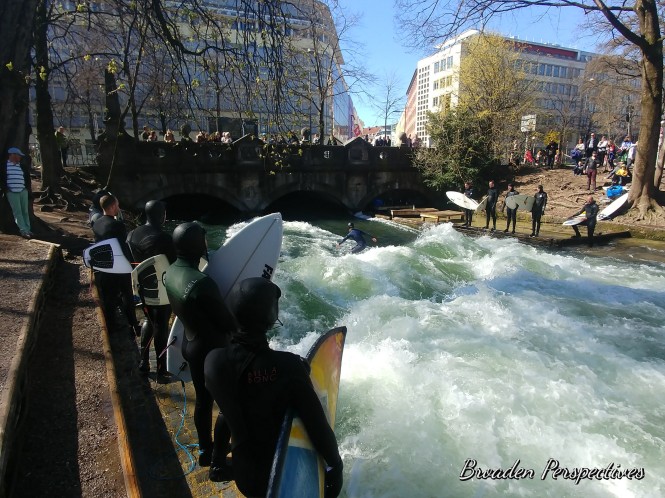 After that, we continued walking up towards a beautiful stone or marble circular “pavilion” on the top of a hill in the park. It was really beautiful and you could get a very nice overview of the wide open space in the park. It was so sunny out that the park was quickly becoming busy with people either playing or resting on the wide fields. In the English Garden there is a place that has a building that sort of Chinese-style tower. Around this are a lot of picnic tables and some food and bier venders creating a Bier Garten (or beer garden). We kept walking for a bit past that, saw some really pretty type of geese, walked around the little lake, and then since it was about lunch time, decided to go back to the bier garten and get a huge Bavarian pretzel and a beer. While we were eating the pretzels, an ensemble of trumpets was playing on the second level of the Chinese tower. It made for an awesome ambiance in the bier garten. After that, we worked our way back towards downtown, walked through the market area, and then back our accommodation. I worked on my blog and took a nap. 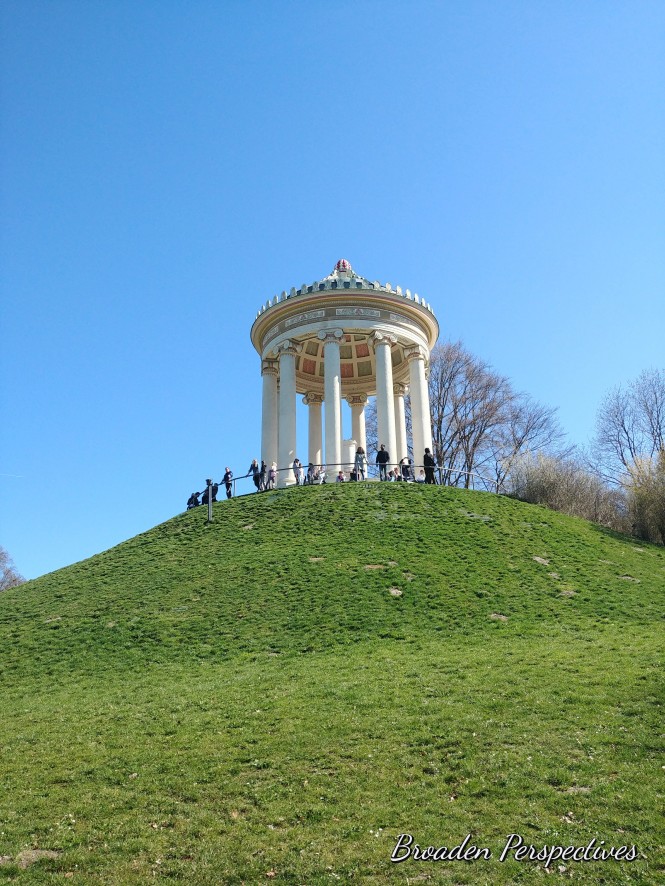 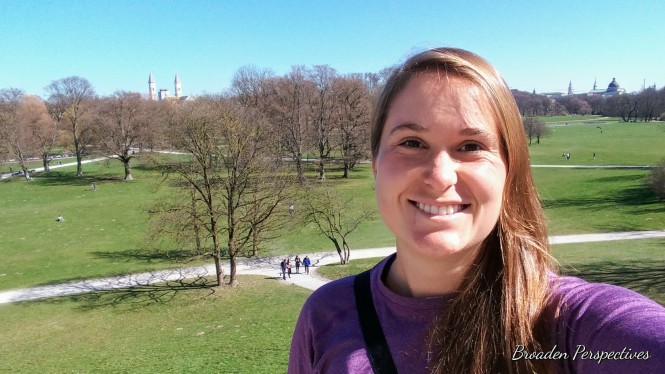 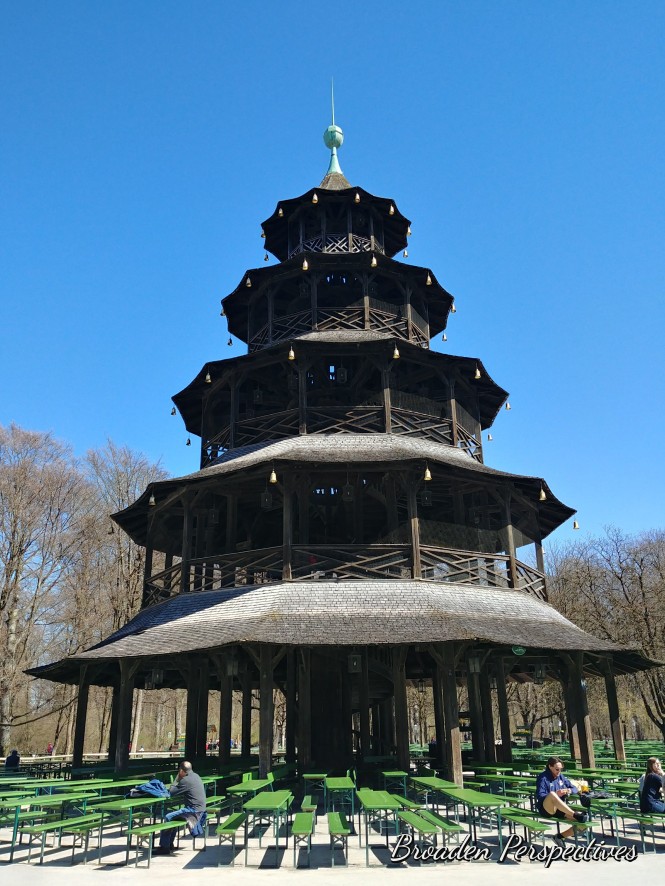 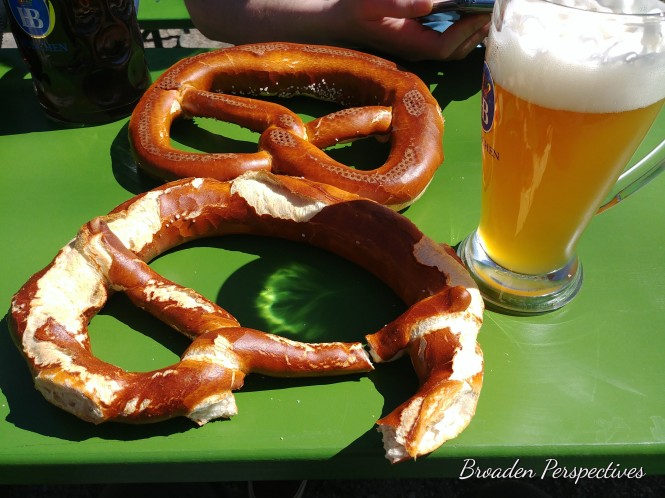 Can’t get much more Bavarian.  😀

Patrick had to leave in the morning to do his weekend stuff. I decided to go on another long walk to see Olympia Park. 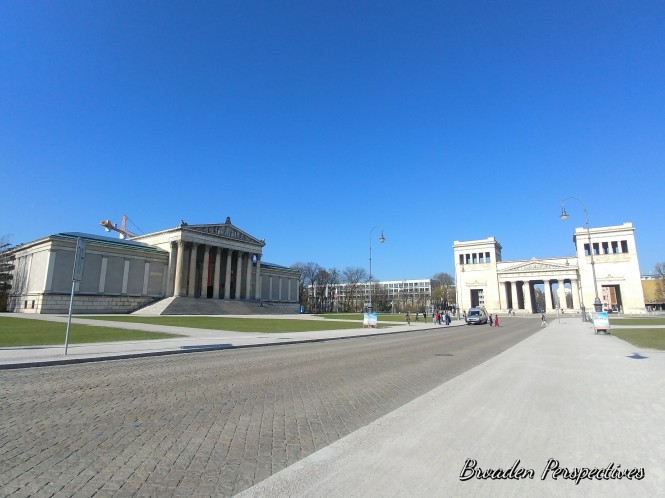 The view overlooking the olympic facilities. 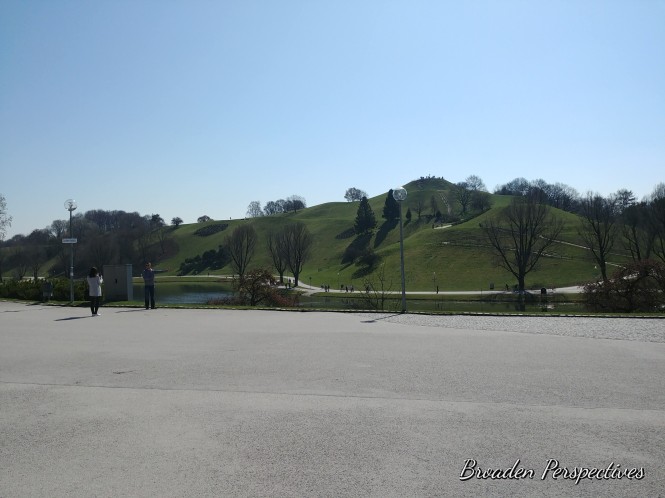 View of one of the hills and small lakes in Olympia Park.

A couple of girls in their teens or early 20s were trying to do roll around in this water wheel but they couldn’t manage.  It was sort of funny watching them tumble around. 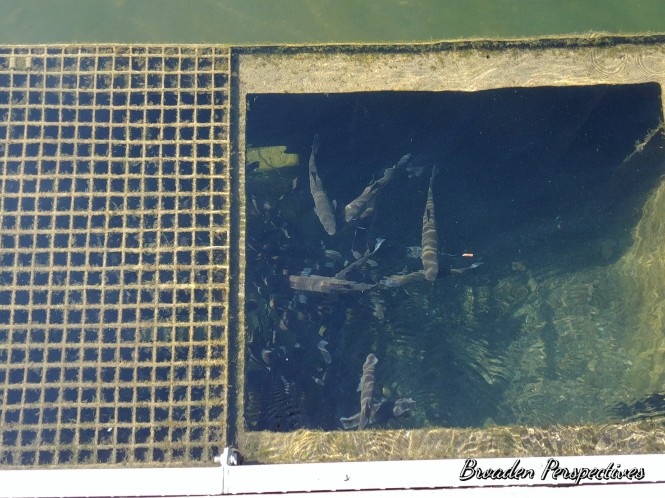 Fish hiding in a drainage cage/thing. 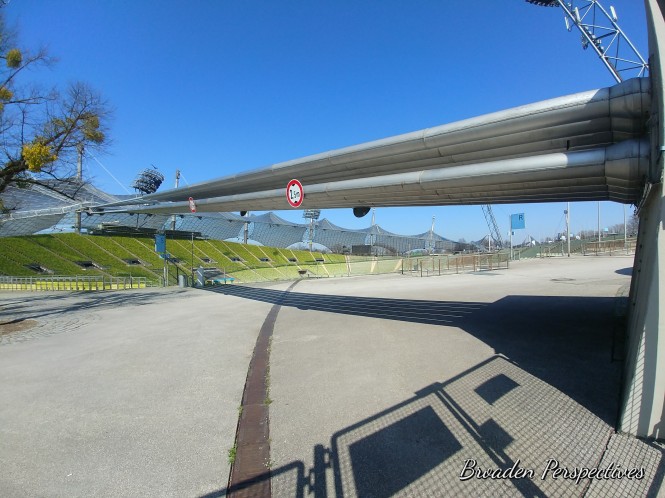 One of the really cool cable-stays for the olympic structure cover.

On my walk back towards the hostel, I saw this tiny house that a young guy, an architect and engineer, was discussing/presenting to a small group of people.  It was pretty neat.  He was pretty preoccupied or I would have introduced myself to him. 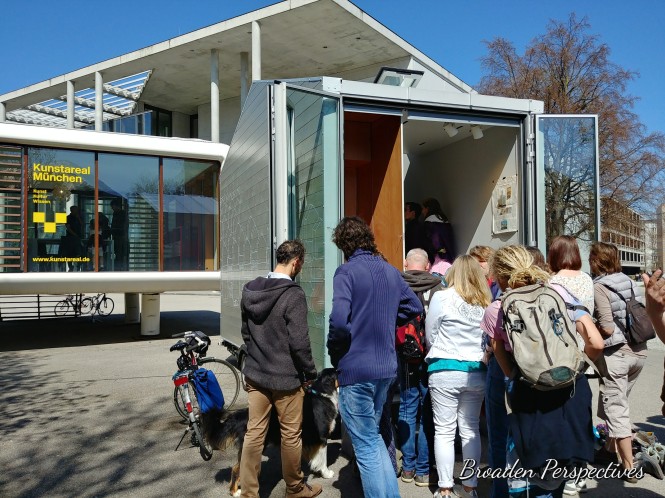 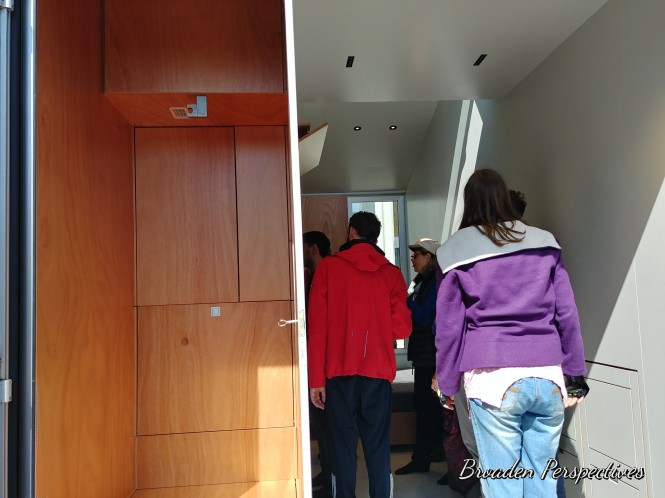 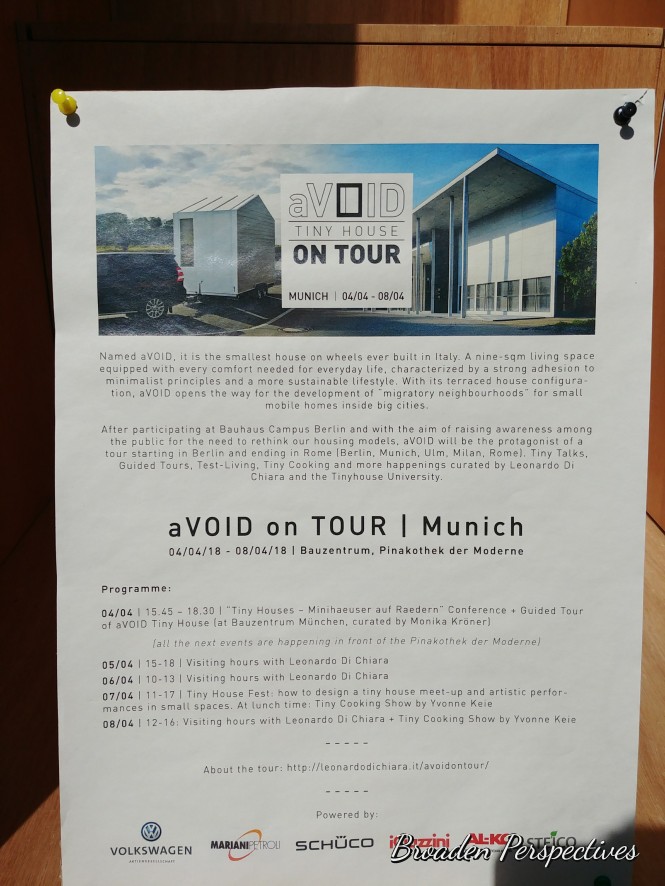 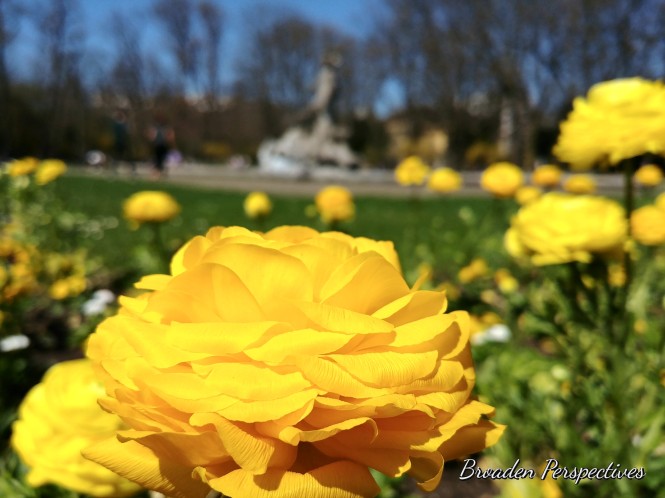 Later that afternoon, I met up with two girls that I met on my vacation trip with Contiki Tours in Australia. We became pretty good friends and so I had let them know that I was coming to Germany and we were able to coordinate a couple of hours together in Munich! It was so nice to catch with Charlotte and Nicole. Thanks so much for meeting me ladies! Hope we can meet again sometime. 🙂 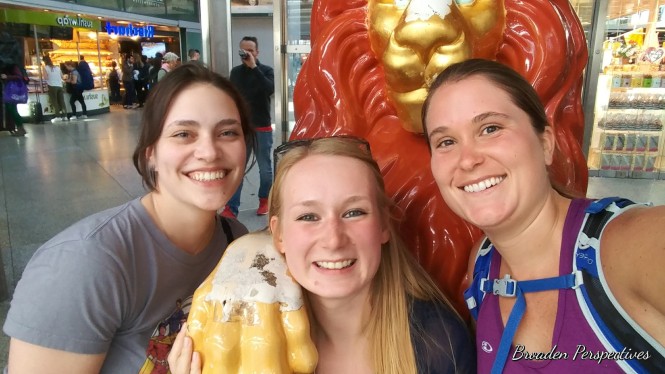 Catching up with Nicole and Charlotte.  🙂

After our afternoon together, I went back to the hostel. I stayed at the Wombat Hostel in Munich which is a very nice place to stay. It was my first hostel stay since I had stopped traveling around New Zealand and was doing the work exchange, so I was just very slightly apprehensive about getting back into sharing a room with new people. But it was fine of course. I spent only one night there as I was catching a train to Salzburg, Austria the next morning.