I accidently “unpublished” this post when going between my page on Chrome and the WordPress App. So this is basically republishing. 😦  Also, not sure what possessed me to initially write “Van Trapp” instead of Von Trapp.  My bad… I think I fixed that in this updated post.

I was up and going pretty early in order to be ready and catch my 9:30am train to Salzburg, Austria. I was packed and ready to go by about 8:15 or so and then ran to the grocery store a couple blocks away to grab some fruit, milk, and granola for my breakfasts.

Hopped on my train and rolled out. It was a nice train ride; not too long and we passed by some pretty mountains and a lake or two. It was also nice and sunny when we arrived in Salzburg so that didn’t hurt my feelings. It was an approximately 15 minute walk from the train station to the YOHO Hostel. It was too early to check in to the hostel and get a room key so I asked for the key to the luggage storage room and went and fenagled with my packs so that I wasn’t carrying too much on my wander around town.

I grabbed an area map of the city from the front desk of the hostel and went out to walk around and see what I find. Here’s some pictures from what I found. 🙂 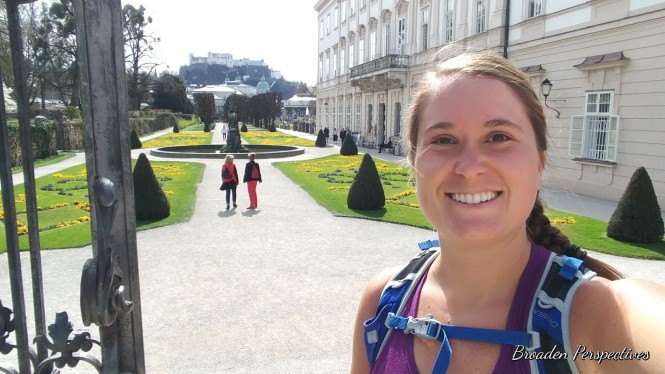 This is one of the locations/scenes from the Sound of Music where Maria was teaching/singing Do-Re-Me with the kids.

That is Mirabell Palace on the left side of the photo. 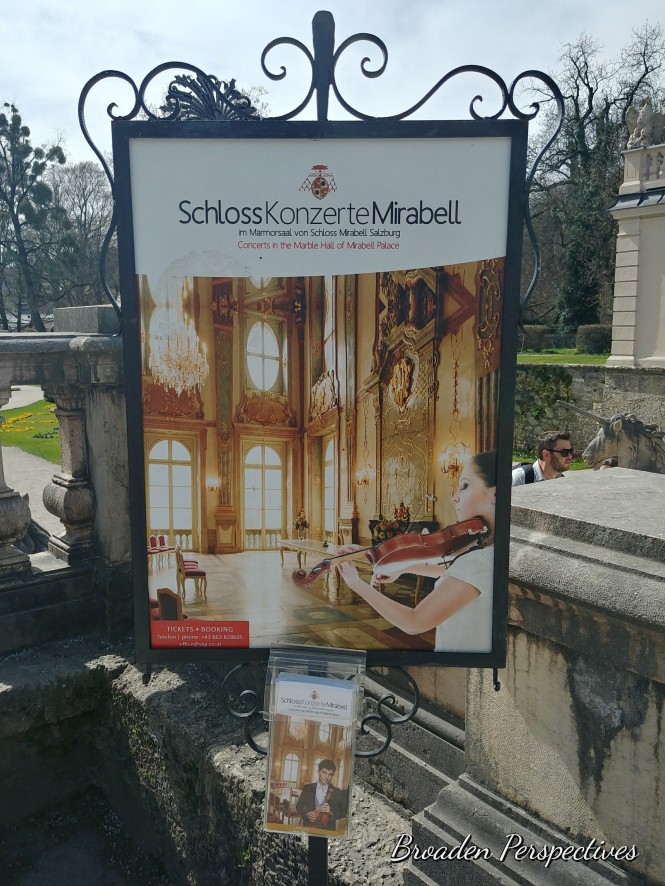 This poster peaked my interest and I immediately thought “I need to go see a concert!”  And so I went online and bought a ticket to an ensemble playing some Mozart and Vivaldi on the evening of the 11th.

The staircase up to Marble Hall within Mirabell Palace. 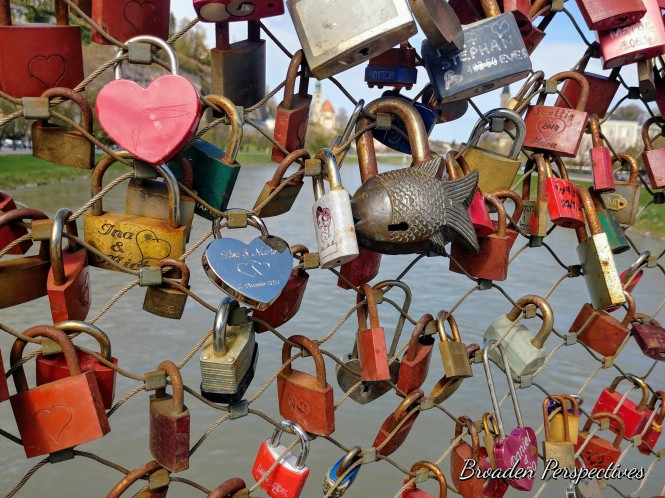 One little fishy got caught.  :-p  But there are many others left in the sea.  😀

There are soooo many locks on this foot bridge.  I do wonder at what point the locks pose a risk to the structural integrity and strength of the bridge due to excess weight not designed for.

Sitting on the riverbank.

Pretty relaxing spot.  I had to tell myself to just sit down and enjoy the sun.  Even when I have no reason to really be in a hurry, I feel in a hurry to go and see something.  It is so hard for me to actually slow down.

After this big loop of a walk, I headed back to the hostel to check in because I was getting pretty tired and my legs were achy. It’s sort of funny… with the last picture above, I was walking and walking and it was so sunny but for some reason, in my mind I was in a hurry. Why am I still hurrying?? I had to literally tell myself I can go down here where other people were laying in the grass next to the river and chill out for little while. Why is it so hard for me to physically slow down? Anyway, I sat here for probably 15 minutes until the ants and other little crawlies started finding me and so I then went back to the hostel.

All during this time now, I was in touch with my cousin who was doing my 2017 taxes for me since I’m out of the country during this tax season. I don’t usually wait till the last-minute to do my taxes but I was waiting for a form from Wells Fargo which never came and so I had to request copies twice each with took “5-10 business days to process, mail, and be received.” So, running out of time… Next year I will not wait as long to do my taxes.

This morning, I planned to hike up one of the nearby hills to get a higher view of the city. It was tiring going up hill but I usually feel so empowered and strong a couple of minutes after I catch my breath at the top that it’s almost always worth the effort. 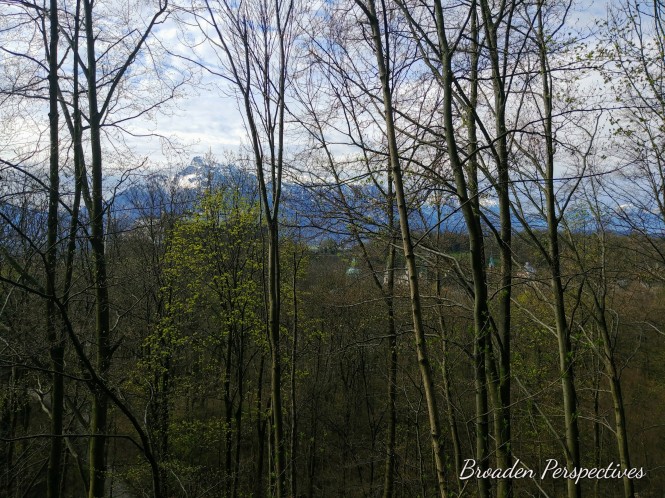 Snow-capped mountains and castles are a brilliant combination for photography. 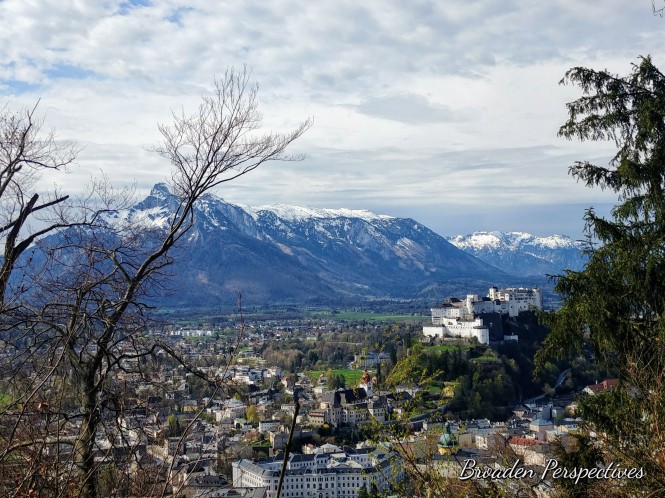 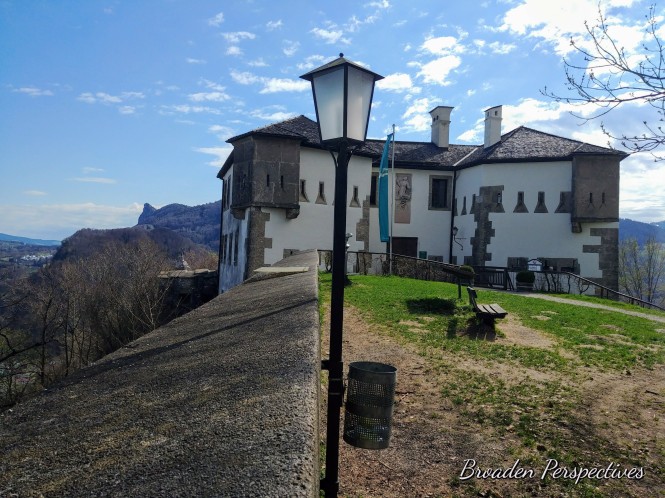 The “old town” is mainly on the other side of the river. 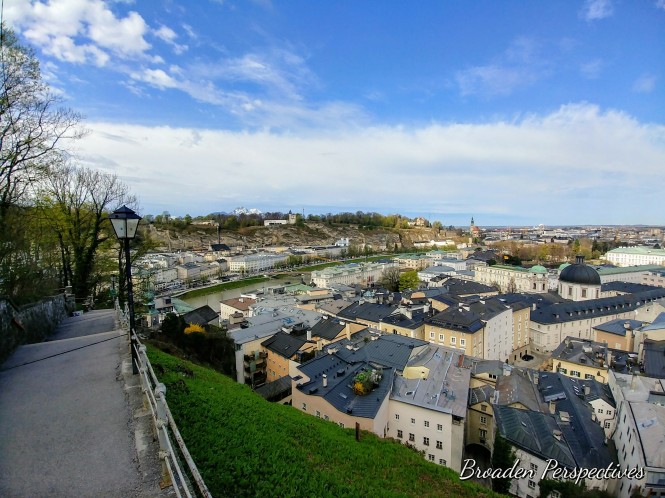 I love this picture.

After this walk I figured I should head back to the hostel and work on my blog. I did stop for lunch at a place called BioBurgerMeister and got a veggie burger. Yummy, they make a good sandwich!

I know one of these days that I was in Salzburg I took a pretty long nap. I don’t remember specifically which day though because I’m so far behind! I also got talking to a couple of guys in my mixed dorm room; not at the same time but over the course of my stay. One of them was from Australia(?) and was named (how I heard it at least) Loki…yup, like the demi-god in the Avengers movie. The one that the hulk whips around like a rag doll at the end of the alien invasion of NYC via the portal from Stark tower. Yea, I know that all probably sounds weird so if you don’t understand, go watch the Avengers movies. They’re pretty funny. 😀

The other guy I got talking to was a young pilot from Canada who was living in Newfoundland/Labrador. His job was flying small planes to/from small remote villages to more central larger villages for doctors appointments and groceries, etc. It was pretty cool talking. We found out that we each had bought a ticket to see an ensemble playing at the Mirabell Palace Marble Hall on the evening of the 11th. Crazy coincidence.

The morning of the 11th, I resolved to walk around Salzburg and see a few more sites from the Sound of Music as well as go up to the big castle on the hill.

This is the fountain that Maria flicked water into the air when she was heading to the Von Trapp house.

Heading up to the Fortress Hohensalzburg.

Wouldn’t mind that view every morning.  🙂 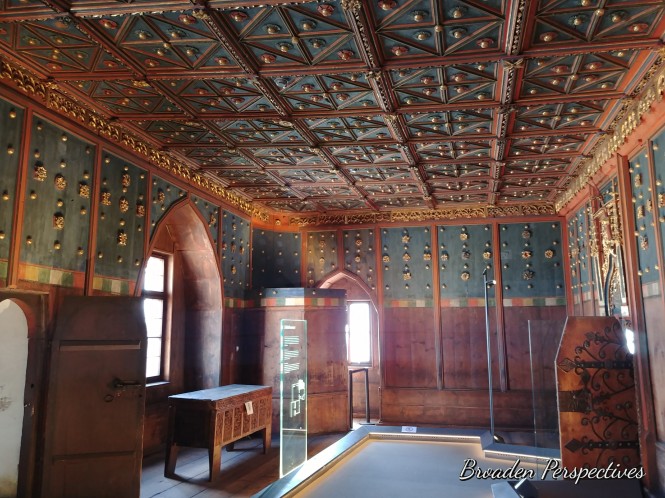 One of the original “long drop” toilets…

There for I think 4 of these huge marble columns supporting the ceiling in this main room which was used to entertain important guests or hold meetings. 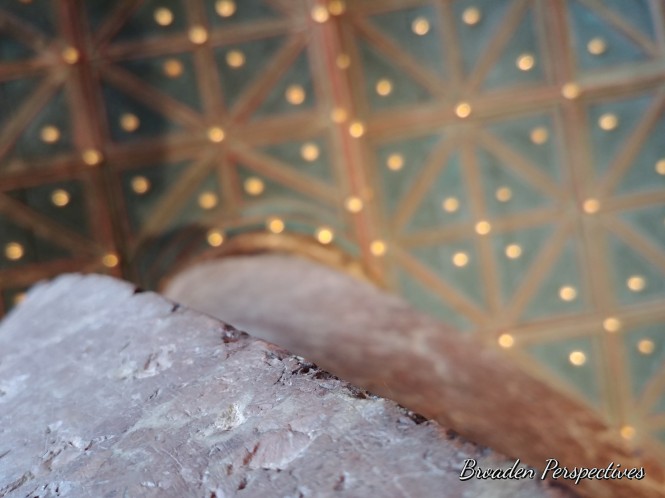 Seemed like a bit of a small kitchen for such a large facility.  But what do I know… I’m just a lowly peasant. 😀 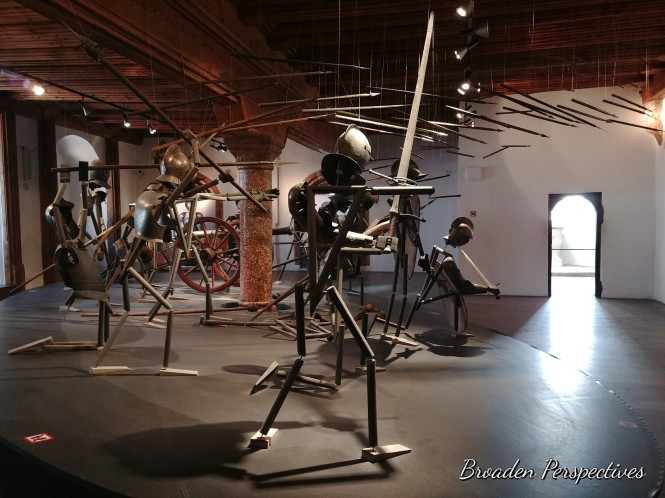 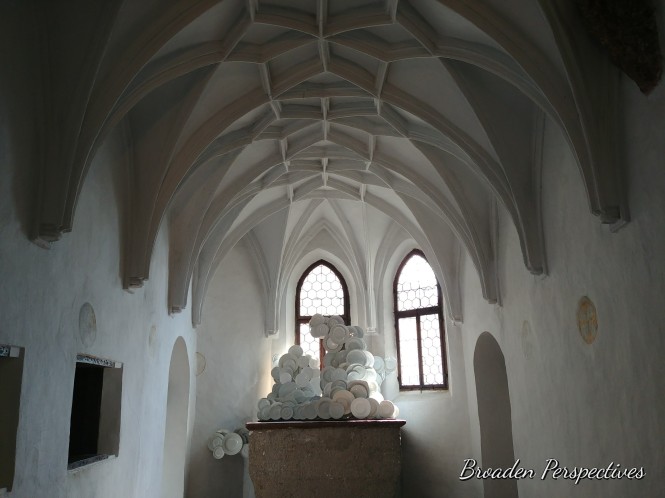 A chapel with a work of art involving white plates. 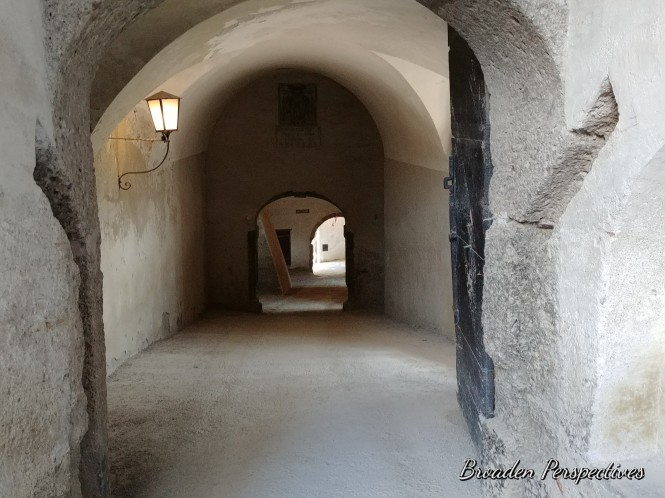 The roadway out of the castle heading back down towards town.

A view up from the road down.

After a little while I was getting “museumed-out” and so decided to leave and walk to and see the Abbey where parts of the Sound of Music was filmed. I learned that the interior of the Abbey is not the interior of the Abbey here in Salzburg; they’re different. The Abbey is called Stift Nonnberg on Nonnbergsteige or Nonnberggasse. I also learned that the Von Trapp house doesn’t actually have a lake in the front yard; they spliced two locations together in the film. The Von Trapp house is called “Frohnburg” on Hellbrunner Allee and the “water in the front yard” is called Leopoldskroner Weiher and has a hotel/conference center on it called Schloss Leopoldskron on Leopoldskronstrasse. Looking back, I probably could have/should have rented a bike and seen both these places. But since they weren’t one in the same I felt a little bit let down that so much “editing” was done to such a great movie.

Another thing I found out was different: the huge grave-stone type things that the Von Trapps hid behind at the very end of the movie I don’t believe really exist. It was a concept or creation based on the grave stones in Petersfriedhof, a graveyard in a catholic church where there were large grave stones in an area protected by gates. But they were basically up against the wall, there wasn’t really any room for a person, let along several people, to fit behind them.

Stopped and chatted with Maria.  :-p

Such a beautiful location and view. 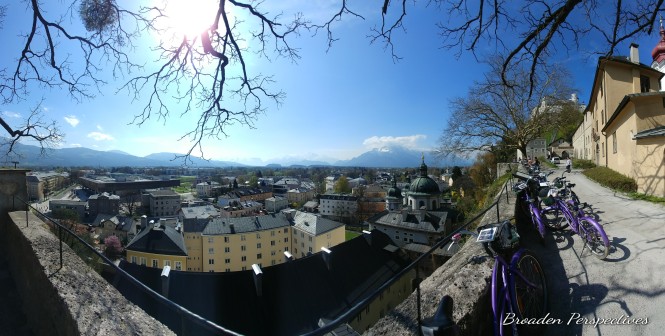 Picture the Von Trapps flying down this little road in that car and careening around the tight bend at the right hand side of this photo.  🙂

If you jack up the volume on the video below, you might hear a group of tourists that I spoke with up near the Abbey, the girl that took pictures of me, for me. They were from the US. We got talking about how long I’ve been traveling and the fact that I’m traveling SOLO and she said “Wow, you’re brave.” I don’t know if I really consider myself as “brave.” I would describe myself as more open and excited to see new places and meet new people. I guess that takes bravery, but it’s not all or just bravery. It takes interest, openness, willingness to listen, respect, and other things. At the end of the day, the saying I learned in Southeast Asia sums it up the best: we are all “same same but different.”

After this long bit of walking around, I headed back to the hostel to shower up so that I could find dinner and then go to the ensemble. Dinner was an organic pizza place that was really good. The pizza was a bit bigger than anticipated and it left a bit of garlic taste in my mouth so I thought “oh crap, right before a concert with other people sitting near me with garlic breath!” I quickly walked to the supermarket I knew was right nearby but it had closed about 9 minutes before I got there. 😦 I was also STUFFED! 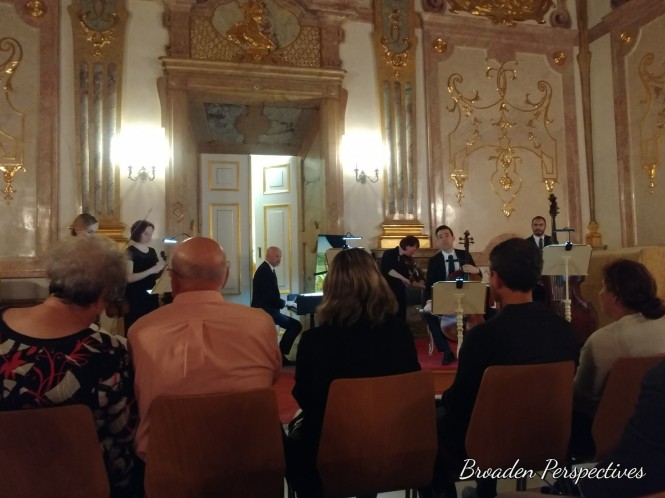 There was one more lady that somehow didn’t get in my picture.

The chandelier above my head during the concert.

After the concert, I walked around a little bit to see the city at night and wow…it was pretty! 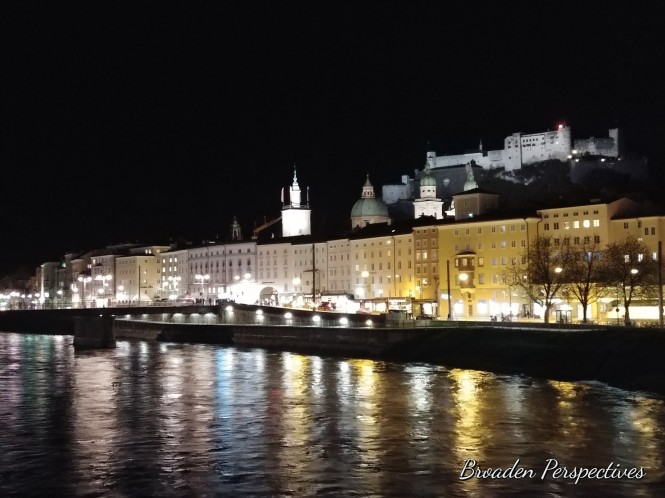 Then it was back to the hostel to go to bed. Had to be up the next morning and get ready to go to Innsbruck for five days! 🙂