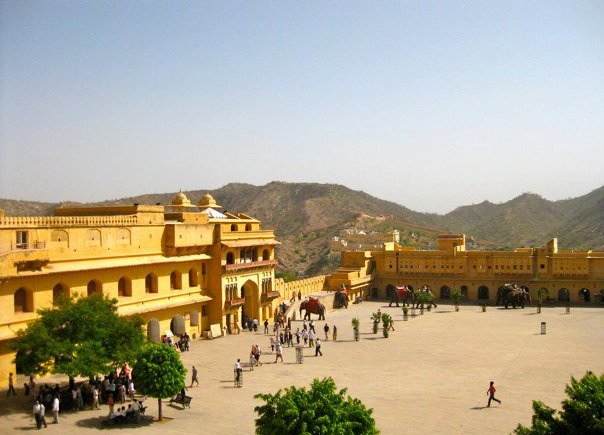 The day after we arrived in Jaipur, we took a drive to a beautiful stepwell.  Pictures below.

This was a very deep stepwell. 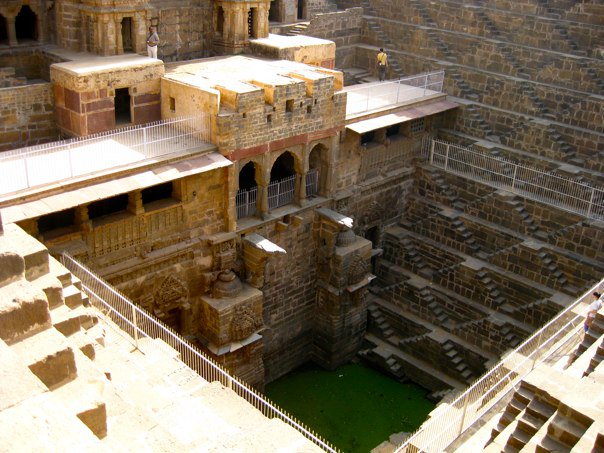 You can only go so far down before you see that fence.

Lots of algae in the water as you can see.

After visiting this stepwell, we stopped at a monkey temple.  At least the tiny stepwell here can be used by the monkeys. 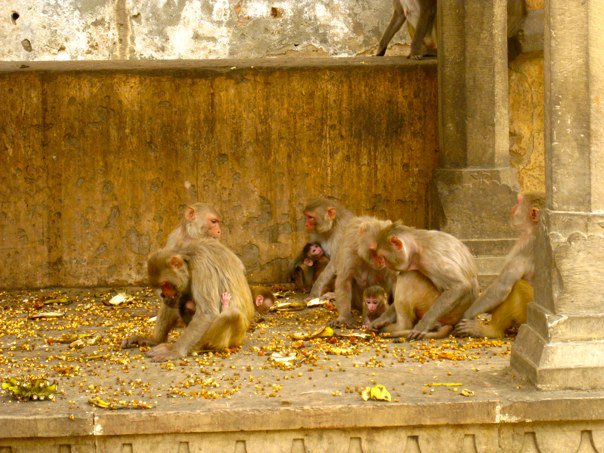 Today was going to be an amazing day.  We went to see a place called Amber Fort right in Jaipur.  This place was absolutely beautiful!   We got up early, loaded onto our tour bus, and headed out.   The exciting about getting into the fort is that you can ride an elephant up to the top!! (for a small fee).   That was pretty awesome.   Pictures are on facebook. 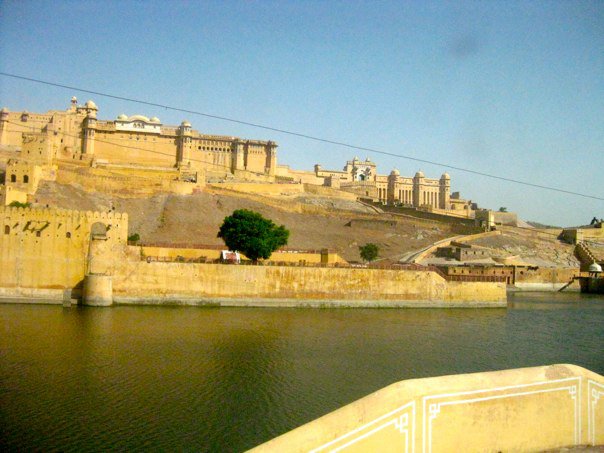 A view of the fort on our approach to the entrance.

A view of the main fort courtyard once we had reached the fort on top of the hill. 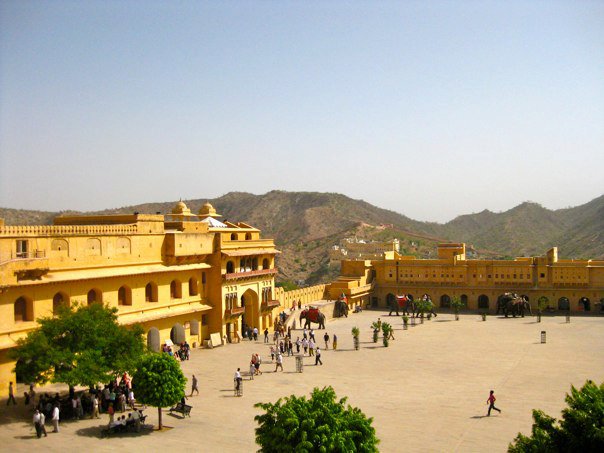 Another view of the main courtyard.

I still have my FabIndia clothing tucked away in a box somewhere.

It was a beautiful (albeit HOT) day. 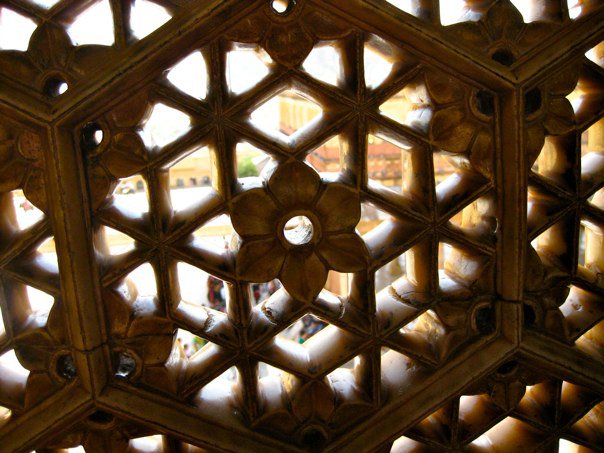 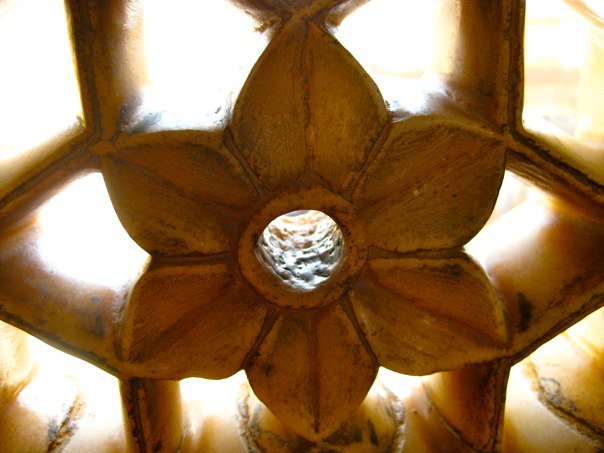 I love this picture! My camera went dead but I stuck with my friend Firdaus who’s camera knew when not to die.

This is a view looking at another courtyard type area where there were venders selling crafty souvenirs.

I bought a couple of small, I believe it was referred to here in the US as “brilliant” cut sapphire stones.  For Christmas just last year she had the stones set into a beautiful pair of earrings.  Yup, I’ve been keeping them safe in various places this whole time.  Thanks Mom!!!

That was the first half of the morning…. the second half was not quite so good.   They had planned to go to this restaurant…but I guess they hadn’t really seen how far away it was.   So we drove for about an hour and a half until they realized this, and so somehow, someone decided it would be ok to stop at this “side of the road” truck-stop for lunch…. yikes.   Needless to say, some of us decided it would be in our best interest not to eat the food.  They did bring out naan bread which was freshly baked and very hot…and so instead of starving, we ate plain naan, which even by itself is really good.

Back on the bus, we headed to a location that only our guide knew about; this guy who had a block printing and dyeing business for textiles.   It was in the middle of no-where, but ended up being very interesting.  We went to a few of the locations where people were working and then wen to his house for chai and also to look through some of his work and where we could buy something if we wanted to.   This was nice, but it was extremely hot – around 2-3 pm which is basically the hottest part of the day.   Sooooo hot. 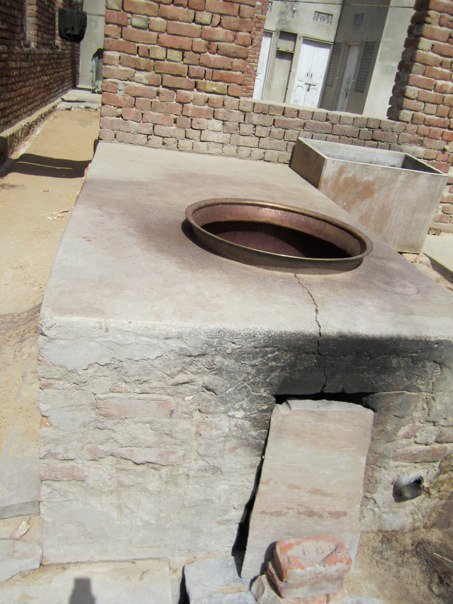 I believe this was a pot to dye large pieces of fabric.

This is an area of sand where they lay out the dyed pieces of fabric to dry.  You can see the discoloration of the sand and the rocks used to hold the fabric down.

Carved stamps used to stamp dye patterns onto the fabric by hand.   We watched a master do it by hand for a few minutes.  Wow.

Laying out the fabric.  You can see the stamped portion hanging off the side, and the fabric yet to be stamped laying on the table.

Apparently this place is called Bagru Hand Block.  I ended up buying Mom a piece of hand-printed, indigo-dyed fabric which she still has and which makes a very unique table cloth.

Time to leave – yay.   Got on the bus.  Took us FOREVER to get back to the hotel because we experienced corruption first hand…. the guard that was somewhere – I didn’t actually see him – but we stopped for a bit, then backed up and headed down a different road.  Later I heard that the guard wanted a bribe to let us go the short way.   So it only took us like 2 hours to go what should have taken 45mins- 1hour.   No big.  LOL.    Nice to get back to the hotel.