Our new friends hadn’t left when we got up so we chatted for a few minutes after showers were done. Dad and I packed up, went to (guess where) for breakfast, and then hit the road for Bryce National Park. The weather was pretty cool and cloudy. Our friends had actually come to Zion from Bryce and told us it would be quite a bit cooler there as compared to Zion.

The drive out of Zion National Park on Route 9 East (Zion-Mount Carmel Highway) was really pretty. On the road out of Zion, there are two tunnels; one is 1.1 miles long (as seen in the photo below) and the other is pretty short. Both carved out of the rock and neither of them have lighting inside so the 1.1 mile tunnel was total cave darkness with the exception of the car headlights and the occasional carved out tunnel window (an opening carved out from the roadway to the outdoors) which let in some light. Unfortunately I don’t have a picture of these windows. A couple of them were pretty big and I remember noticing how one or two of them were quite small.

Our new friends from Zion National park had a small mobile home and they were trying to remember whether the 1.1mile tunnel was one lane or two lanes. When they went through, they said they had alternating traffic. So Dad and I were tasked to take pictures and settle this once and for all. Well, friends, the tunnel was a wide 1-lane road. They were alternating traffic when we passed through as well. It wasn’t the size of your camper that made them alternate traffic. However, I did notice that they had a maximum height sign in the center and on the side of the tunnel so they probably did suggest you drive down the middle of the tunnel. But entering and in the tunnel, we did not see any double-yellow lines on the road.

Double yellow lines up to the entrance of the tunnel but do not proceed inside = wide one-lane road.

The rest of the drive to Bryce was pretty un-spectacular and not picture worthy. I was driving as well so I couldn’t take pictures.

The temperature did drop between Zion and Bryce… Zion was probably low 70s and as we got to Bryce, the temperature had dropped into the 60s. We did have on-and-off rain on our way to Bryce and for the duration that we were there.

To get to Bryce from Route 89, you take Route 12 to Route 63. On Route 12, you drive through Red Canyon which was very pretty. We noticed a beautifully paved multi-use path (i.e., for us a bike path) starting near Red Canyon. We were drooling on it the whole way up the road.  The trail went for a good distance into Bryce National Park.  If/when I go back, I’ll be bringing my regular bike pump and riding that trail.

I guess I should tell you that up to now, we’ve done negligible cycling. I rode my bike around the campground loop at Deny Creek a couple of times; that’s it. The reason being: I bought Dad a tiny compact air pump for Christmas when we were still planning to do the cross-country bike trip. Then the trip morphed into a cross-country car road trip with bikes. So, to save what little space it would have saved, I left my regular-size bike pump (for my tires) at home. I didn’t even think to test the tiny pump to make sure it could get our tires up to the appropriate pressure (my tires take ˜110PSI or a little more). Well, we tried pumping up the tires with the tiny pump at Deny Creek (back in Washington) and could barely get it up to 60PSI; not enough to go for a good long bike ride. We also figured out that the bike that my Dad was going to use had a different nozzle/receiver thing that the pump hooks up to than mine. So we couldn’t even use one pump for both bikes. Even if I bought a regular bike pump (which I totally could and should have in Seattle), we probably wouldn’t have been able to pump up both bikes with it!

So all of that combined with the on-and-off rain at Bryce, we decided not to push the bike ride on the beautiful bike path. We stopped at an information center just outside of the Bryce National Park gate to change into some warmer clothes (because it was cold and rainy) and to get a weather report to figure out the chances of the weather clearing off.  The chances were terrible: 80% chance of rain all day and the following day.

We were able to get a picture with the sign!  There weren’t crowds of people there (chilly and rainy – hence the rain jacket).

See my new rain jacket? My other one was a very similar color but it was only waist-length and no pattern. This one is clearly longer and, if you look close at it in person, it has a little rectangular pattern on it… I love it! I got it at the Columbia Sportswear store in Seattle. It was one of those things that I try on and immediately know that I shouldn’t have if I didn’t want to spend the money! It fit me perfectly! I had to buy it.

We flashed the annual pass at the gate and then stopped at the Visitor’s Center to stamp the NP passport and get some post cards and stickers. The stuff at that gift shop was pretty expensive compared to other National Parks. Maybe it was better stuff? I’m really not sure. Anyway, we went back to the car, detached the trailer in the over-sized vehicle lot, and then headed out for drive to explore. We drove all the way to Rainbow Point. There were quite a few pull-offs where we stopped and got out to see the sights. Here are some of the pictures!

We watched the storm make its approach (on the right side of the picture). 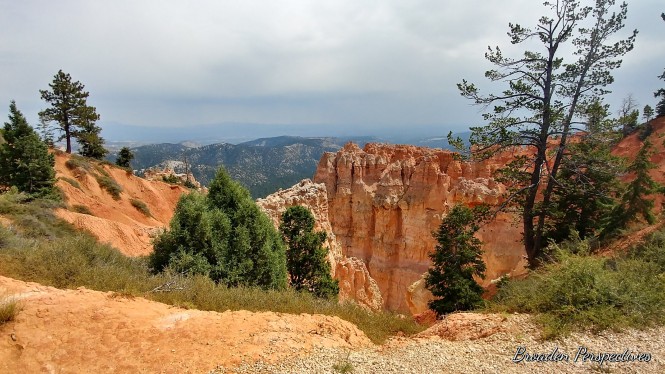 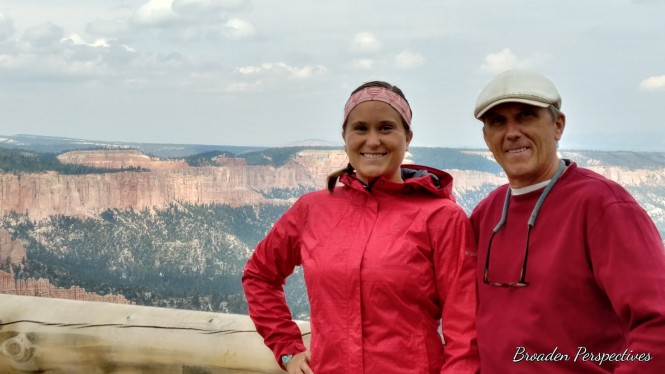 My favorite picture of me and Dad.

That last picture is my favorite picture (from the whole trip) of me and Dad. 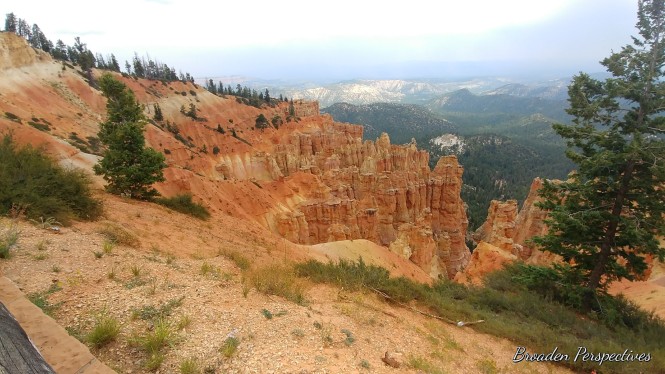 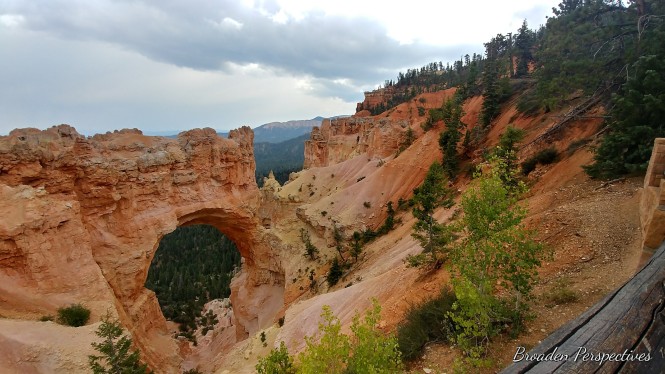 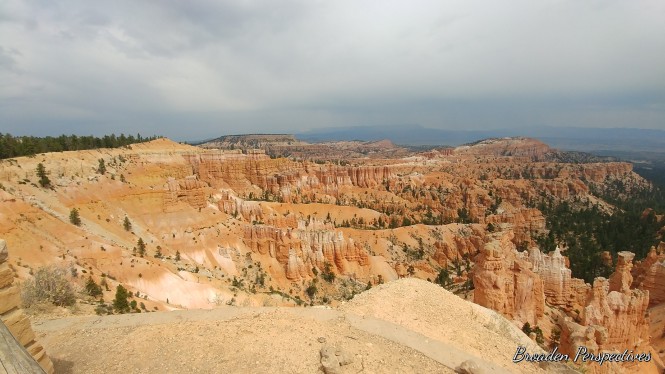 It is pretty spectacular though.

This and the previous photos were between/at Sunrise and Sunset Points.

Am I (or was I, now) one of the few people who didn’t know that those spire formations were called “hoodoos?” What a weird name! Just call them spires for cramp sake… hahaha.

Due to the weather and feeling like we had seen enough of Bryce NP, we decided to head back to the visitor’s center. It was a little joke with us… “Don’t forget the trailer.” The over-sized vehicle parking was off of a side road and if you were very preoccupied or consumed in thought with something, you could (potentially easily) drive by and forget a trailer.

So, Don’t Forget the Trailer! 😀

Thankfully we didn’t. Spoiler Alert: The trailer made it home.

Here are some of my favorite pictures! 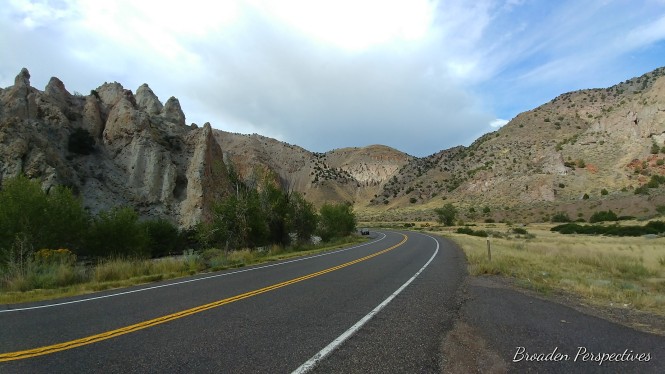 This picture doesn’t do that particular view justice… it was prettier than it looks.

We passed a few scenic areas along I-70 East and decided to pull off.  I believe this one is from Sandbench View Area on I-70E in Utah.

Another scenic view area… This is at Devil’s Canyon View Area; I-70E, Utah.

Same location as above, different angle.

Same location as above, different angle.

Same location as above; panoramic view. 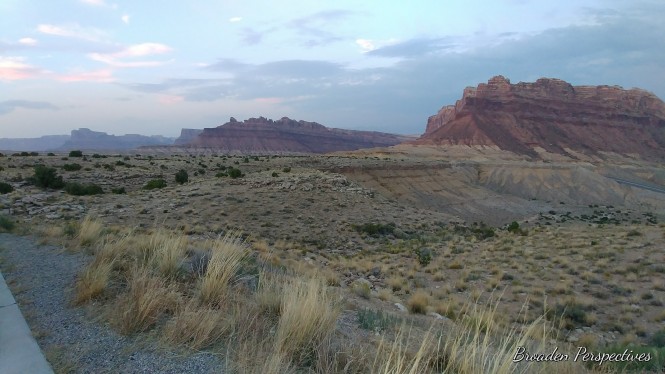 Same location as above, panoramic view.  I really wish we hit it at sunset… it would have been incredible!

You’re probably wondering how I remember the names and places of these overlooks/scenic areas!  Well, stay tuned for the post for September 13th!  I’ll tell you then!

I was driving so Dad was in charge of finding a hotel to stay for the night. We found a place in Green River, UT. It was nothing fancy… but got us through.

Dad thought he called and made a reservation at Knights Inn (a little down the road from where we stayed).  We got there and both of us got a slightly creepy feeling.  There were trucks and guys hanging around the main entrance to the place.  We got into to the reception area to check in and weren’t any more reassured.  The lady there looked for us and said “I don’t have a reservation for you.”  Hmmm…. She called a hotel or two for us to see if the reservation was somewhere else and it was at the America’s Best Value Inn.  That place was a bit better but nothin fancy for sure.  Google Maps needs to update their information in that area FOR SURE!