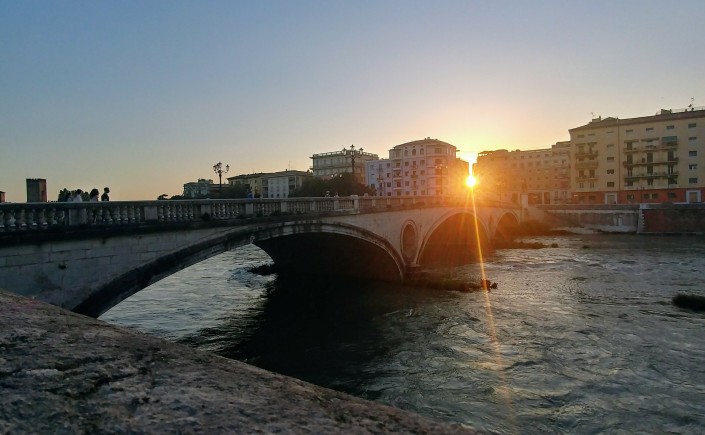 If my trains had been on schedule, I would have gotten to my accommodation in Verona around 4:30pm and would have a decent portion of the evening to wander around Verona and see the sites. But, the trains weren’t running on time, well one train was; the train I needed to catch on my first connection. But I only had an 8-minute window between when my first train would arrive and the second would leave and my first train arrived 15 minutes late. So I had to wait two hours until the next train to Brescia. I used that time to write up some of my weekend in Munich. I asked a couple of strangers sitting near me if I could use their phones to send an email to my accommodation telling them that I would now arrive at least two hours later than anticipated. One guy said yes and thankfully I was able to let the B&B know that I was delayed.

Waiting for my train….

That second train was so old and loud; it didn’t have any AC so all the windows were open. It was a diesel engine, each car had two engines, and wow… we rumbled through very rural small Italian towns. I missed my connection in Brescia so I had to wait for the next train to Verona. We passed through a farming area that stunk of animal poop…

Thankfully, the train to Verona was amazing; quiet, clean, air-conditioned. I figured I would just walk to my accommodation from the Verona Porta Nuova train station. It was only a couple of kilometers and since I had such limited time there now, it would just serve as a city tour. I finally got into Verona around 5:30pm. It was a really nice walk. 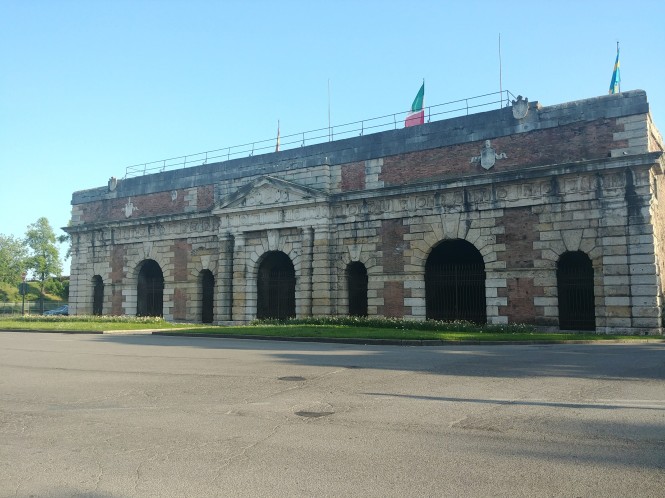 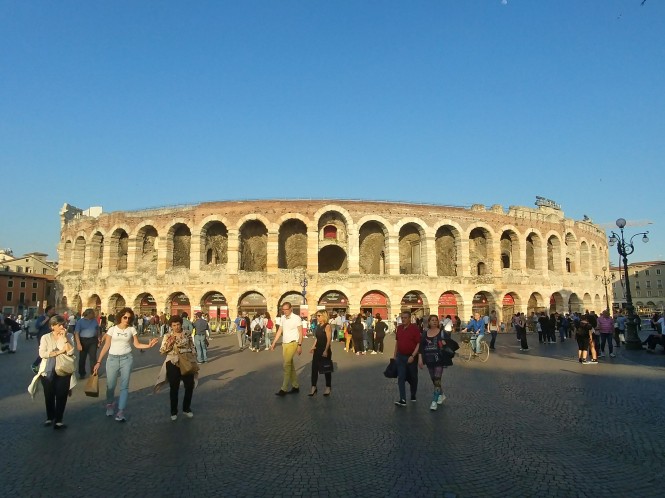 Can I say: I have days where I get really sick of all the looks from people who I just know are thinking “Is she carrying enough stuff?” To those people I have just been saying “Listen, I’ve been traveling abroad for 6 months now and have been in multiple climates doing a ton of adventurous things that require gear!!! So I really don’t want to hear it!” If I’m actually talking to them and not just sending them angry vibes, They usually leave impressed like Wow, so you have what you need! Yes, yes I do!

Got to my accommodation, checked in, dropped my stuff, grabbed my wallet and my small “essentials” bag, and headed back out to walk around town before it got dark. I walked by Juliette’s house which was crowded around by tourists. I was able to look through the gate; there was a ton of writing on the walks just inside the gate and I did actually see letters stuck to the walls further inside the courtyard area. It was neat to see. But I didn’t feel like asking the security guard if it was too late to go in and didn’t want to get yelled at by tourists if I had budged in front of the line. So I just took a couple of pictures and walked on.

It’s crazy how much writing is on those walls!

You can see the paper stuck on the wall behind those two people.

I was drawn into a Swatch (Swiss Watch) store and found a beautiful blue watch. I keep my eye out for a particular style of watch; preferrable blue-green with a date display inside, and water-resistant. Fossil stopped making my favorite watch which I’m still upset about. Anyway, this watch was almost everything I wanted, but the one with the date on it was a little too big, and the one without the date had two tiny crystals in it which really made the watch very beautiful. Why don’t they make one with crystals and the date? I would have bought that right away. But I stood there staring at both watches on my wrist and I just couldnt decide so I knew it wasn’t exactly what I wanted because if it was, I would have known immediately.

After the Swatch store, I just walked around, saw a couple attractive restaurants, some nice places I could get ice cream, some nice shops, etc. Walked towards the Arena di Verona; it was a busy city square area with several restaurants with busy outdoor seating area. Before I even decided on this one restaurant as I walked by, one of the nice and VERY friendly waitresses basically pulled me in and showed me a table….ok, guess I’m eating here. I mean, if I really didn’t want to eat there I wouldnt have, but it looked nice and the menu looked good so I thought yea this will work. I’m pretty sure that was my favorite pizza in Italy. I was at Bistrot Mamma Mia by Piazza Bra. It was a really nice evening. After dinner, it was dark and so I headed back to my B&B for the night. It was the summer opening concert at the arena and an Italian artist was playing. That arena surprisingly muffles the sound coming out of it very well; you couldn’t hear much at all! That or they have much lower volume levels than concerts in the US.

Walking along the river.

As I walking along the river, I kept saying to myself “come on, come on…”  I was referring to the sun.  I knew it was behind those buildings and I wanted to be able to photograph the sun threading the needle between two buildings and I finally found the right spot!  🙂  Happy days. 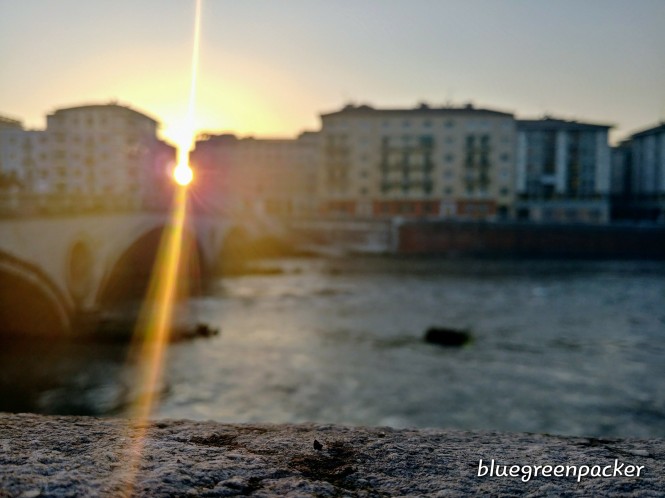 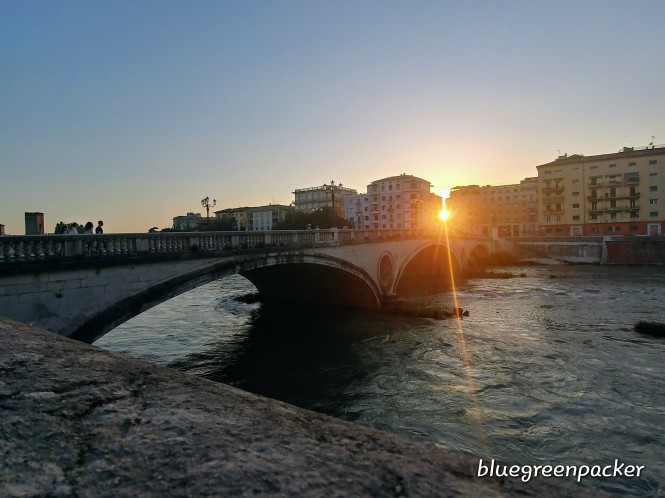 Anyone know how you can sell a photograph for a postcard? 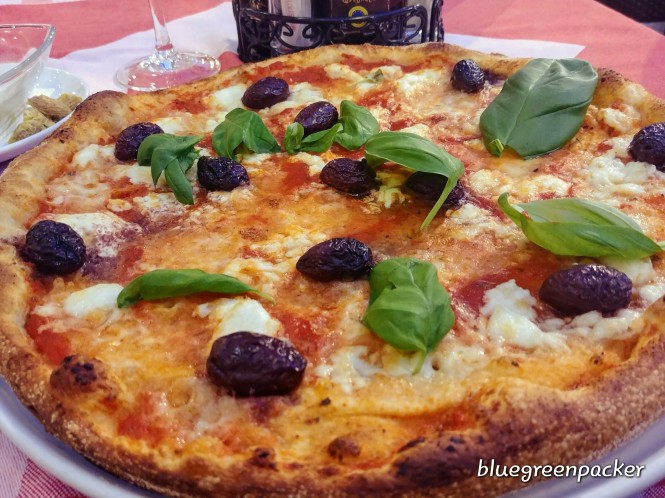 This was, on it’s own, the best pizza I ate in Italy.

Arena di Verona at night with a concert happening.

Here’s a video panorama of the busy square by Arena di Verona.

Flight to London, UK day! My flight was at 11:30 and so I wanted to be at the Verona airport no later than 9-9:30am. I walked back from my accommodation to the train station where there was also the regional bus station.

Just a pretty view while walking to the train station.

I bought a ticket from there to the airport for 6Euros I think. That bus driver was a little bit in a rush. He went around corners on a highway faster than I’ve ever experienced any bus driver do. It was slightly hair-raising! Was thankful to get off at the airport. I checked into my flight and then when I was going to go through customs to leave Italy,the guard said you know you can’t comeback in here once you leave, right? Umm, yes I know… almost chuckling because I’m a responsible adult, I’ve traveled a lot and know that you can’t go back through customs. But as soon as I went through and saw that there was nothing behind customs except a restroom and gates to go to the airplanes, I knew why he had mentioned it. I suppose I should have waited a bit longer to go through. Oh well – the two hours went so fast it was ridiculous!

The flight to London was relatively smooth. I had a middle seat; an older lady was next to the window and she barely looked out the window at all. I wanted to ask if she would switch seats with me but she seemed a little up tight and potentially uppity that I didn’t want to disturb her. So I just stared past her face out the window. We had some turbulence over the alps and then coming into London, we hit a pocket of no air or something and the plane dropped I don’t know how many feet, but that was freaky. There were some kids in the seats behind us that were adding very dramatic sound effects to the turbulence which was not helping at all. I’m finding that I really don’t like turbulence.

It can get pretty freaky.